Use the Samsung SSD security software on new T7 or no?

I picked up a new Samsung T7, and when I plugged it in I saw that it included some Samsung security software. Traditionally, I’d just wipe it all with Disk Utility, but I’m wondering if that extra software actually offers anything useful.

Any advice or experience?

Could you post a screenshot? Recently picked up a T7 but haven’t noticed this.

Just this; I haven’t started installing anything, but this is what popped up in Finder when the disk mounted. 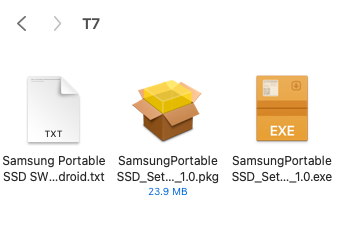 It’s not uncommon for drive manufacturers to include security software with their products, but I never use it. I prefer GNUPG or AES (which the Mac uses in encrypted APFS).

I’ve purchased several Samsung T7 drives and normally format them as apfs, or encrypted apfs, when I use them with my Mac and iPad Pro.

Thanks. That’s helpful. I figured I would just format and start fresh, but I wanted to see what the community thought, too.

I copied it off and zapped the drive with Disk Utility. Read the docs at the time couldn’t find a compelling reason to use it.

There is a lot of really bad encryption software out there. I’m not saying that’s the case here, but it’s not unprecidented that the software that’s been included with these kinds of drives is terribly written. Even when beginning with a good encryption standard (like AES), the implementation can be very difficult to get right.

I’d either format the drive with an encrypted filesystem (as was suggested already), or put the data into an encrypted container (like an encrypted disk image or sparse bundle).

I copied it off and zapped the drive with Disk Utility.

that’s exactly what I did too

Yeah, on a modern Mac with a modern SSD, I just use encrypted APFS unless I want to use it to transfer files with someone else, when I will just use ExFAT for maximum compatibility.