I don’t think this has been asked in a long time.

Soon(ish) I want to get into recording video for course material, zoom and more. I have adequate audio right now and its the video I want to improve/make practical.

Of course the problem with all webcams is how to maintain eye contact while still being able to see your script. At least for the Olympus I can setup a teleprompter (part of the long setup time).

What are others doing for good quality video without spending 1/2 a day setting up to record.

Interested in this too. The camera in the M1Pro is quite good but my main screen is a Dell 32 with no webcam. I have a micro 4/3 but have been using Camo with my iPhone 12. It does kinda put the phone out of action for the duration though. I picked up a Blue Yeti for sound. Would also be interested in opinions of zoom v QuickTime v whatever else, and where OBS would fit in. I need to produce material with a Picture in Picture of the presenter.

I think a lot of it has to do with how permanent your setup is. If you can leave it set for a long time without coming back to it then go for the highest quality. The more pieces you have to take down, the bigger the advantage is on the side of simplicity.

From what it sounds like, you don’t have the ability to leave the Olympus in place for recording.

Personally, I take the time to setup my fancy camera—Sony a7iv—anytime I need high quality video. Why? Because it’s work the quality and I can choose different backgrounds throughout my house. If I did it a lot, I’d probably have a camera, tripod and my teleprompter all set up, ready to go in a closet somewhere, then pull it out and go.

Thanks all for the replies. 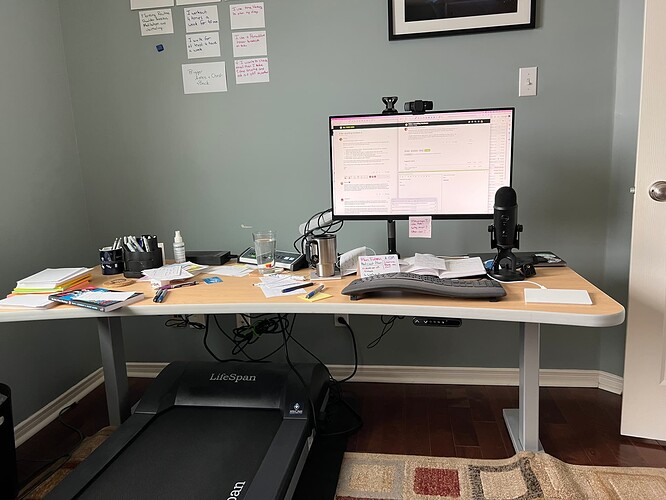 I have a sit, stand, walk desk. I can’t afford to leave anything setup, because when I change from switch from seated to walking everything moves. Effectively desk is only half its nominal width.

@Coulmac - Don’t mind my iPhone being tied up when I record, its not like I will be playing with it then.

@mitchell3417 strangely the Olympus remains the primary still camera in the house, so I don’t want to lock into a setup.

@SpivR I have a photography background going back to the film years Yashica FX3 → Nikon FE2 x 2 → … D300 → Olympus EM5 MkII (it’s lighter than a D300). So I know my way around many things photography related.

I think my reluctance to use the Olympus + teleprompter is the setup time and the shot in the dark aspect. I can’t see the Olympus flip out screen when its buried in the teleprompter. So I can’t be 100% certain if I’m in focus until I upload the recordings.

I assumed (untested) if I use the rear phone camera with a standard lens (1x, ?? mm), that the sensor does an adequate job. The challenge then appears to be how to display a script. I suppose the crazy idea might be to put the iPhone in the teleprompter on a tripod mount. Which still entails a massive silly setup operation.

I’m curious about the “pain in the hind end to setup” part. My primary webcam is a Canon EOS M200. It’s mounted to my iMac, has a power adapter rather than using a battery, and is connected using an Elgato Cam Link 4K. The only “setup” is hitting the power button on the camera.

I think my reluctance to use the Olympus + teleprompter is the setup time and the shot in the dark aspect. I can’t see the Olympus flip out screen when its buried in the teleprompter. So I can’t be 100% certain if I’m in focus until I upload the recordings.

Does it have HDMI (probably micro) out? Use an external monitor or use an Elgato Cam Link to connect it to your Mac.

@ChrisUpchurch thanks for the response. The pain is that it is 10+ minutes from time to shoot a video → working setup. I still have to get around the lack of clever system to connect my Olympus directly to the Mac, so I’m flying blind when I do record. Did I get good video or not?

How are you planning to deliver the content, with you as a “floating head” over the screen or are you front and center, lecture/interview style? In either case, as I’m sure you know, adding some lighting to your list can make as much, or more of a difference than the camera.

My wife wanted to have the ability to make videos like this for her business, so after research I picked up a Sony ZV1 which is a ‘vlogging’ recommended camera with very good ratings for non-pro usage. I got a tripod from Sony that detaches and has remote functions, a light that mounts in the cold shoe and extra batteries. Topping it all I am learning to use the free version of DaVinci Resolve, which is pretty intuitive I think. I’m still in under $1000 total so far.