Which podcast app(s) are you using ?

Overcast works great and does all I need, why swap?

I listen to my podcasts at 2x… oh boy, do people sound different when I listen to them on 1x. Yesterday was watching Automators emojified podcast and was wondering whether that was the same @MacSparky I listen to everybweek on MPU

I also use Overcast with a faster speed; closer to 1.5 but it changes based on the podcast and fluctuates with silence being compressed. I’ve done this for so long that I’m not sure what the ATP closing song would sound like at 1x speed.

Despite a few flaws I’m still using iTunes and the Apple Podcast app as it’s the thing I’ve found that works across all the devices I use. I’d love to switch to using Overcast but the lack of a Mac and AppleTV app are stopping me.

I’m quite often listening to podcasts whilst working on Mac and watch video podcasts on the AppleTV, and, whilst i could use my iPhone or iPad to play the podcasts through my AirPods or streaming to the AppleTV, it seems a bit redundant to be draining the battery from a second device for this.

I do watch a few video Podcasts such as MacBreak Weekly so also considering its overall design, features and multi platform syncing Pocket Casts gets my vote.

I have tried almost every single Podcast app.

Because of Siri and because I like listening to podcasts on my newly acquired HomePod, there is no real alternative to using Apple’s Podcast app if I do not want to deal with listening to episodes several times or managing the Podcast data in several apps.

For me, the ideal solution would be a centralized podcast management system with several apps that are able to read from and write to it.

Then, I could use Castro or Overcast, my HomePod…

Oh well… One can dream…

So, I will keep using Apple’s Podcast app…

I slowly built up to listening to podcasts at 3x. Every other podcasting app excluding Overcast either doesn’t have that option or doesn’t do as good a job of keeping the voices souding normal.

I have been using pocket casts for years, I like that they always have strong Multiplatform support, and being an Aussie dev, it’s feels good to support other local devs

Screenshot of metrics because why not. 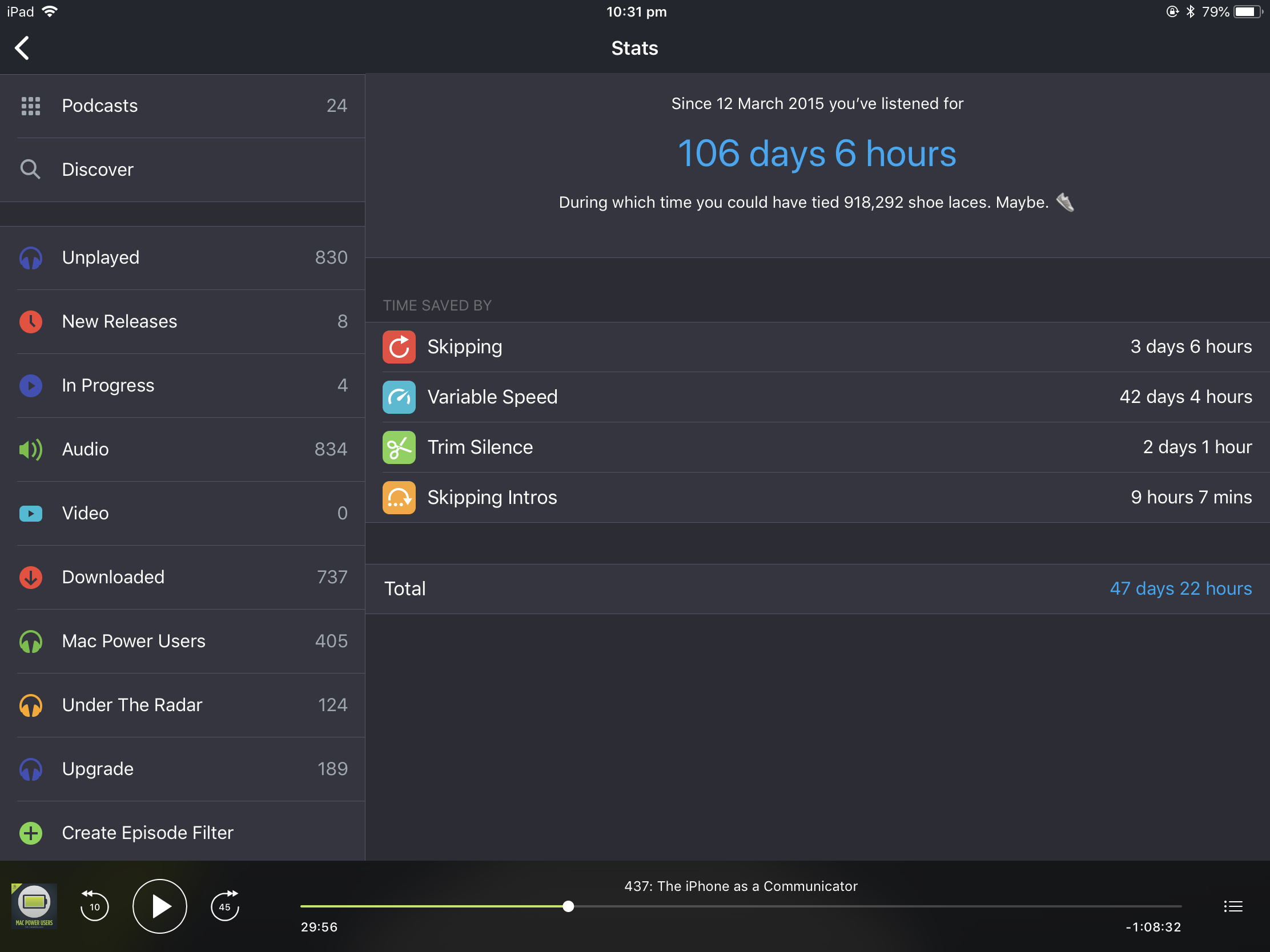 I use Castro, I really like the Inbox system. I am subscribed to way to many podcasts. They all land up in an Inbox where I can decide to add them to the Queue or Archive them.

Castro. Inbox triage is great and the latest update added all the features I had been missing.

Looks like Marco gets a lot of love from the MPU community.

I use Downcast on the Mac. It’s the only one I could find which permits fine control over which episodes are marked as un/played, which are downloaded and deleted, and which stores the downloaded files in a human-readable directory structure. I use it on iOS too for similar reasons (minus the file storage). I have a lot of podcasts and it’s not failed me so far!

Because Overcast doesn’t support video, I have Downcast on my iPad for MacBreak Weekly, iOS Today, and Night Attack.

Pocket Casts for multi-platform support (I have an Android phone as well). If I were iOS only, I’d most likely use Overcast.

Castro mainly, because I like the way it allows me to manage podcast episodes. I also keep PocketCast around, though, for those rare times when I want to listen to something on the Sonos at home rather than on the phone when I’m out and about.

On the Apple Watch, I’ve found that OutCast works quite well.

I’m using Castro mainly because I don’t like how Overcast organize everything. It also keeps downloading my podcast and I had to set it not to every single time. Happy that Castro has some of Overcast features and still way better in terms of managing podcast episodes.

I used to use Instacast and I love that it has a Mac app. Sadly, it’s one of the casualties at the time where people are not used to paying for a new version of apps on the App Store. It took a lot of hits. I even supported it by being a paying patron way before app-subscription was a thing.

I used Downcast for years but it seemed to have stopped being updated and became quite flakey on iOS 11. When Castro 3 came out I tried the trial and quickly loved the approach. When I paid for the subscription and got access to the extra features I quickly realised how worthwhile they were… the voice boost is amazing and the clip silences works really well. The small yearly cost is trivial for so much utility for me.