Continuing the discussion from iOS only on vacation:

iOS only on vacation

I haven’t used one yet. I’ll be installing this one in the next day or two if all goes well, and can report back about how it works. Well, if it doesn’t work, I won’t be able to report back.

I’m breaking this off into its own topic so as not to hijack the previous thread. Right now, I have the Weboost Multiroom booster’s antenna temporarily mounted outside the house, very stylishly, on top of a ladder. We spent an hour testing different spots. Based on online maps, there is a somewhat close tower for all three major carriers behind our house, but with a big hill behind the house blocking things. There’s a further tower in front of the house with a clear line of sight. I’ll be moving the antenna up high on the house, or on a pole out in the driveway, later this week. Here are my findings with the Weboost in its temporary location:

If I succeed in a permanent mount in a better location later this week, I’ll chime in again.

Looks like the device adds a bar – what’s the cost?

Thank you for bringing up this topic. I found this video that explains some things about boosters. 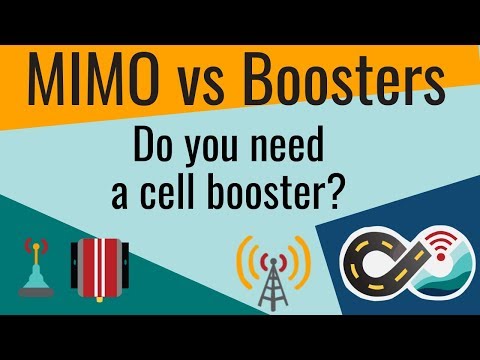 Right now it is adding a bar with the antenna temporarily set up at about 9 feet off the ground. Remains to be seen what it will do if I can get it mounted higher. I have the multi room booster, which was $569. They have cheaper and more expensive models, with the price based on how far the inside unit beams the signal that the outside antenna receives.

Did you see any significant differences in internet speed?

I still don’t have it mounted high up on the house, but in its temporary location, on an AT&T iPhone, a speed test is giving me 40-50 megabits per second down. Without it, it was 6-10 megabits per second down on the same device. My iPad Pro, with an AT&T sim card, was a bit faster on both. Verizon looks like a dud, so we’ll probably go with an AT&T hotspot for non-AT&T folks.

EDIT: Also, with the booster, the iPhone switched over to 5G. Without it, it used LTE.

Now that I’m back to civilization, I’m circling back on this one final time, or at least the last time for a few months, in case anybody else is considering one of these boosters:

After all the fiddling we did to find a good spot for the booster, and finding a spot with a nice 5G connection that at times was pushing 100MB down for AT&T devices (still nothing for Verizon), we mounted the outside antenna . . . and then proceeded to see horrible speeds the rest of the day, and the next two days. At times I had no bars. One of two things happened (this is my non-scientific analysis, with absolutely no basis except guesswork):

My plan is to buy a replacement inside antenna and see if that gets us the old speeds back. The problem is there is no telling when I might get back to this spot (family vacation house) so it could be a while.

The whole process was very frustrating, and had me for a millisecond thinking that the price to run fiber from the nearest paved road wasn’t too bad (I forget the quote, but it was in the tens of thousands of dollars, as the cost is based on how far they have to dig a trench).

I was wrong when I said I was done posting on this. Although I’m back home, I have family still at the vacation home, and the Weboost is now working very well, according to them. I think I know what was going wrong.

So, the moral of the story is to read the manual, I guess. I’m happy that it is working well (AT&T at least 3 bars, and even Verizon, which has never had any signal at all there, has varied from no signal to 3 bars, per my sister).

Thanks for the update. Like I said above, I did know anything about boosters until you did your initial post. We have a camp and we get OK coverage with ATT but could always use a little better. I may try the Home Room model ($399). If I do, I’ll definitely post my experience with it.

No matter how often I learn to RTFM, it never seems to stick.