What tech were you spectacularly wrong about?

Inspired by the “What Tech Did You take Too Long to Buy” topic – what tech were you spectacularly wrong about?

“Who needs an iPad?” – says me who’s gone through a dozen of these in the years since I had that opinion.

I really wanted a phone+clock radio combo for my 13th birthday. After looking all over town for “just the right one” I was convinced to buy separately, one phone and one alarm clock. I threw away the broken phone when I was 19. My wife counts on the Sony “Dream Machine” clock radio to wake her up every weekday morning. I just turned 48.

I was really in to Minidiscs for a while in the early 2000s. Still a neat technology, but they didn’t last long before the iPod totally demolished that space.

I knew I wasn’t the only one!

When I first heard about AirPort, I sincerely thought it was meant to be used in airports and couldn’t imagine that that would ever, uh, fly.

I also thought the iPod was kind of silly, because who in their right mind would keep their music library on a computer?

When I first heard about AirPort, I sincerely thought it was meant to be used in airports and couldn’t imagine that that would ever, uh, fly.

That’s great, made me chuckle!

« Apple tech is just toys for people who don’t know better » - me until 2016 when I tested the original iPad Pro
The stupid things we can say…
(Now full in the Apple ecosystem, on a Mac Power Users forum… My fiancée makes me bite my words every time she gets

Like many of you I took many attempts at PDAs, both Palm and WinCE - they all failed.
I was huge in to MiniDisc and thought MP3s were dumb.

I know! It’s a beast. I use my phone, but sometimes I set it or turn it off for my wife. I could do it blindfolded I’ve had it so long.

For many years, I was using a 1970s clock radio with a flip style clock. It was, for some reason, always precisely eight minutes slow. It finally gave up the ghost in the early 2000s.

I wish I still had the clock. 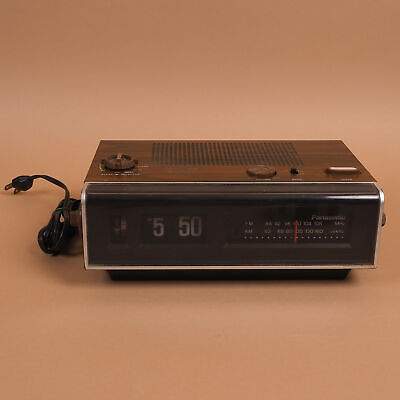 Tested and working. Numbers turn, wheel on the front rotates and it does pick up radio stations. In used condition with marks and wear from normal use.

Ah, I have another one.
I am one of the three people on Earth with a PS Vita.

I’d say the Sony Dream Machine alarm clockwise was the first item that when my first one broke, it was a no brainer to get a direct replacement. I now use my phone next two my bed but just recently have been re-thinking that. So … maybe the Dream Machine makes a comeback!

I was convinced the iPhone would be a flop because a smartphone without a real keyboard would be useless. I thought Blackberry had the right design.

I turned out to be in the minority.

When Apple Watch first came out, I thought that it didn’t have a place in my workflows. My iPhone has a clock on the face. Since becoming a long distance runner, there isn’t a day when I don’t use it for something besides tracking my runs.
Man, was I wrong.

Digital music!
I thought that downloads could never replace albums with booklets, photos of the band members, cryptic liner notes, lyrics and great cover art, gatefold packaging etc.
I was a total heavy metal fanatic at the time (early 2000’s) and just didn’t get that most people just consume music and didn’t care that much.

Lol… When the IPhone 4 came out with a decent camera, I posted on the Canon forums that I could see a phone camera replacing at least a small point and shoot camera and perhaps even be the one go to camera for a lot of people. Boy, did I get hazed for that comment! Everyone thought I was wrong, and some really ripped me a new one… but it turns out I was right!

Going all in, I spent a fairly staggering amount of money on a top of the line MBP 15" with that keyboard, thinking it would last me 7 years or more.
Had one keyboard change and now the screen is dead and battery dying, with repair costs at £800+.

It does run games on our tv, so it’s not dead yet.