What's the 'oldest' software you still use on your Mac?

Thought this might dig up some interesting stories - similar to the oldest hardware thread!

I remember a thread started by someone over on the SonnySoftware/Bookends (the reference manager) forum, asking the developer when Bookends started out.

This was the reply:

“The first release was in 1983, written for the Apple II+ (it required a floppy disk drive), written in 6502 machine language and published by Sensible Software. It was contemporaneous with Reference Manager on the PC (plus or minus a few months). AFAIK, they were the first two real reference managers written for "microcomputers”.

It get a bit nostalgic in the thought that I am using something first developed back in 1983, when I was – shall we say – young!

Anyone care to share some thoughts on ‘old’ software (non-OS/Apple/Microsoft etc. built) that they are still using today? BBEdit/Photoshop is probably up there?

Maybe TeX/LaTeX in general, but is more of a programming language. The rest, I think, is pretty young and was done for osx already.

BBEdit recently celebrated its 25th birthday so it’s a stripling compared to Bookends.

Photoshop was developed in 1987 and purchased by Adobe in 1988. Adobe Photoshop 1.0 was release in 1990. I think that we started using it a year or two later, making it the oldest software in regular continuous use in our house. Sometimes the daunting UI feels like it. As an aside I was on the job market in 1987 and saw some magical photo editor projects during interview trips. None of them survived the onslaught of Photoshop.

I started using Emacs in the late 70s and the GNU Emacs variant starting in the mid-80s. I’ve had occasion to use it on macOS, but rarely in recent years, so I’m not feeling like it qualifies for me.

Microsoft Word for Mac goes back to 1985. That’s probably the oldest software on my (and most people’s) Macs.

Commercial? For non-OS/Apple/Microsoft it’s Lugaru Epsilon, a souped up EMACS. First released in 1984, I started using it in 1985. And I didn’t even have a Mac until ~20 years later. (It runs in macOS Linux Windows MSDOS FreeBSD and even OS/2!)

Non-commercial? I’ve ported some text adventure games from the mid 1970’s that run on the Mac, in the terminal window, of course. Also a TECO text editor that might be considered to come from the 1960’s, although it is from a more recent C language source (80’s).

I guess that since TECO dates back to 1962 (56 years!), that’s probably the oldest here. TECO for macOS and others

According to Wikipedia, Emacs is from 1976, and I use it every day, so I guess it does qualify for me. The command-line tool ed is from 1971, and that’s pre-installed in macOS, so that’s maybe technically older.

Other than MSWord, it’s probably EndNote.
I can’t find the release date, but think I’ve been using EndNote since the late 1990s. Which is depressing because I still feel like I barely understand how to work it.

IIRC MacOS and iOS are based on BSD Unix, first released in 1977. 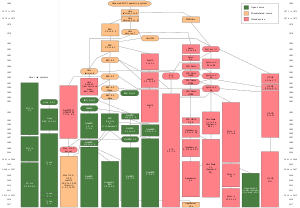 The Berkeley Software Distribution (BSD) was an operating system based on Research Unix, developed and distributed by the Computer Systems Research Group (CSRG) at the University of California, Berkeley. Today, "BSD" often refers to its descendants, such as FreeBSD, OpenBSD, NetBSD, or DragonFly BSD. BSD was initially called Berkeley Unix because it was based on the source code of the original Unix developed at Bell Labs. In the 1980s, BSD was widely adopted by workstation vendors in the form ...

Wow. I remember TECO from my PDP-11 days. I had a real love/hate relationship with that editor. I loved what I could do with it on a paper TTY. I hated what it would do to my file if I left out commands in front of inserted new text (which was instead interpreted as a command string). Good times.

A 2007 version of MS Word. My workflow is so good with it. I know that I need to switch to a newer version. Any suggestions?

Follow the link in my post and you can download a fully functional copy (as well as documentation in plain ASCII text) and relive those glory days! The programmability still makes it occasionally useful, I fire it up maybe once a year.

It’s BBEdit for me. I even worked at Bare Bones for a bit in my early 20s!

Been learning Terminal slowly but surely (I really wanted to get to know the guts of macOS) and I’m not sure if that’s considered “old” because it’s an underlying system and probably receives updates regularly. BUT, it was the way that computers were originally used.

Emacs. You can read anything with emacs.