Which is Better? Eero or Orbi?

I am currently running a router that was supplied by my local internet provider. I have a household that is running 4 Nest Cams, 3 Nest Thermostats, 3 iPad Pros, 2 MacBook Pros, 1 iMac, 4 iPhones, 4 Roku devices, and some other things that I am forgetting at the moment. If anyone has experience with these, which one do you think is the better system?

There are many comparison reviews on the web, and many end up choosing the Orbi over the Eero, though if you listen to podcasts, I think you would expect the Eero to be best, as Eero has given out free units to a lot of podcasters as they inundated listeners with their ads over the last few years.

One big point for some people is that Eero is more “tastefully” designers, while many people dislike the look of the bigger, odder looking Orbi.

I have a three-Eero setup. Whole house. Three laptops, 4 ipads, Echos, HomePods, and all the other hangers-on looking for WiFi. Home and guest SSIDs. The mesh has been running for about a year now. Never had a hiccup. Plowed through numerous power outages and rebooted rapidly and re-established the mesh without intervention. I would buy the Eero kit again.

We’re running an Eero setup for our guest network at work. No issues.

I can’t speak for the Eero, but I’ve had a single-satellite Orbi setup in our 4K square foot house for about a year, and it’s been fantastic. The coverage is comprehensive throughout the house and into the surrounding yard; no dead spots or material speed drops anywhere. Couldn’t be happier, and very, very easy to set up.

I am using a first-generation three-eero system. Connected devices - iMac, 2 iPads, 2 iPhones, 2 Apple Watches, 8 Sonos, 3 smart TVs, 3 Apples TVs, HomePod, HP Printer, NEST, hub for home alarm/door lock/garage door. I am happy with the system - seems to handle traffic well. The iOS app gives me all the info need about the status of the system. I do wish that I could access the same info on my iMac. I also subscribe ($99/yr) to eero plus, which scans my system for threats and includes encrypt_dot_me VPN, 1 Password, and Malwarebytes. For some unknown reason, I haven’t started using encrypt_dot_me VPN and Malwarebytes.

Just upgraded my mothers Wi-Fi and after several weeks of reading reviews and talking with two separate local IT guys I ended up going with the Ubiquiti AmliFi HD system. So far very happy with it, more then doubled her coverage in 6,000sq/ft home as well as coverage outside that was nonexistent before. She has a Ring door bell that before would take several seconds or longer to respond and now is pretty much instantly live. Now this is going from what was probably a $69 wireless router that was a good five to six years old.

I purchased a refurbished EERO, and have been super happy with it! I just wanted the base unit, and one extender, and was able to find one on Amazon.com that was refurbished for about half the price for a little bit more.

I have no experience with Eero for comparison, but replaced a multi-AirPort network with an Orbi+2 satellites about 6 month ago and it’s been great.

Just picked up the Orbi + satellites thanks to some Amazon credit and a $30 coupon. It’s been fantastic. I haven’t had a single dropout anywhere in my house, nor outside. WiFi all over the place for me. Highly recommended.

I’ve had Eero for a year or so and it has been flawless. Great speed. Great coverage across my whole home.

I’ve ran Orbi + one satellite for over a year without any issues in a 1400 sq ft single level house. Probably more than needed but it removed all dead spots and hasn’t needed to be updated, reset or anything. I think I’ve opened the app twice just to see if anything changed.

I’ve used Eero for over a year. It’s amazing and the app is truly easy to setup. Eero plus is great too. You get 1password, Encryptme VPN, and Malwarebytes subscriptions included with the increased functionality for 99 a year.

I installed an Eero at my son’s house and it has worked flawlessly (base and two satellites). I am thinking about my house now. I have been leaning towards Orbi since the overall reviews have been slightly better. I am also interested in looking at OpenMesh (anybody have any experience with their products?)

Ditto. Love my Orbi’s. I have great coverage over 1/3 acre.

The Wirecutter has a good reputation for their reviews and advice. 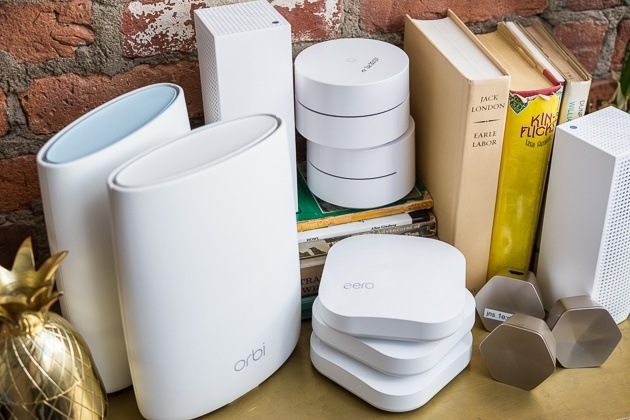 The Best Wi-Fi Mesh-Networking Kits for Most People

We’ve tested 12 Wi-Fi mesh-networking kits, and we've found the best combination of speed, range, features, and price for most people. Here's what we recommend.

Sorry to resurrect this 2 year old conversation. My 2-3 year old Orbi set up works fairly well except it doesn’t reach the backyard despite a satellite sitting in the back window. Perhaps this satellite is too far from the base unit. Maybe only a weak signal reaches it.

To diminish the load on the wifi network, we use MOCA to send ethernet to the AppleTV’s around the house. Can I plug Moca into the back of the Eero which can then emit a strong wifi signal from each satellite? Orbi satellites don’t have an Ethernet-in jack.

To diminish the load on the wifi network, we use MOCA to send ethernet to the AppleTV’s around the house. Can I plug Moca into the back of the Eero which can then emit a strong wifi signal from each satellite?

If I understand correctly, I think this case discussed in Eero’s forums is relevant. The answer seems to be “yes … maybe” depending on how the Eero’s are initially set up and bridged to the internet connection. 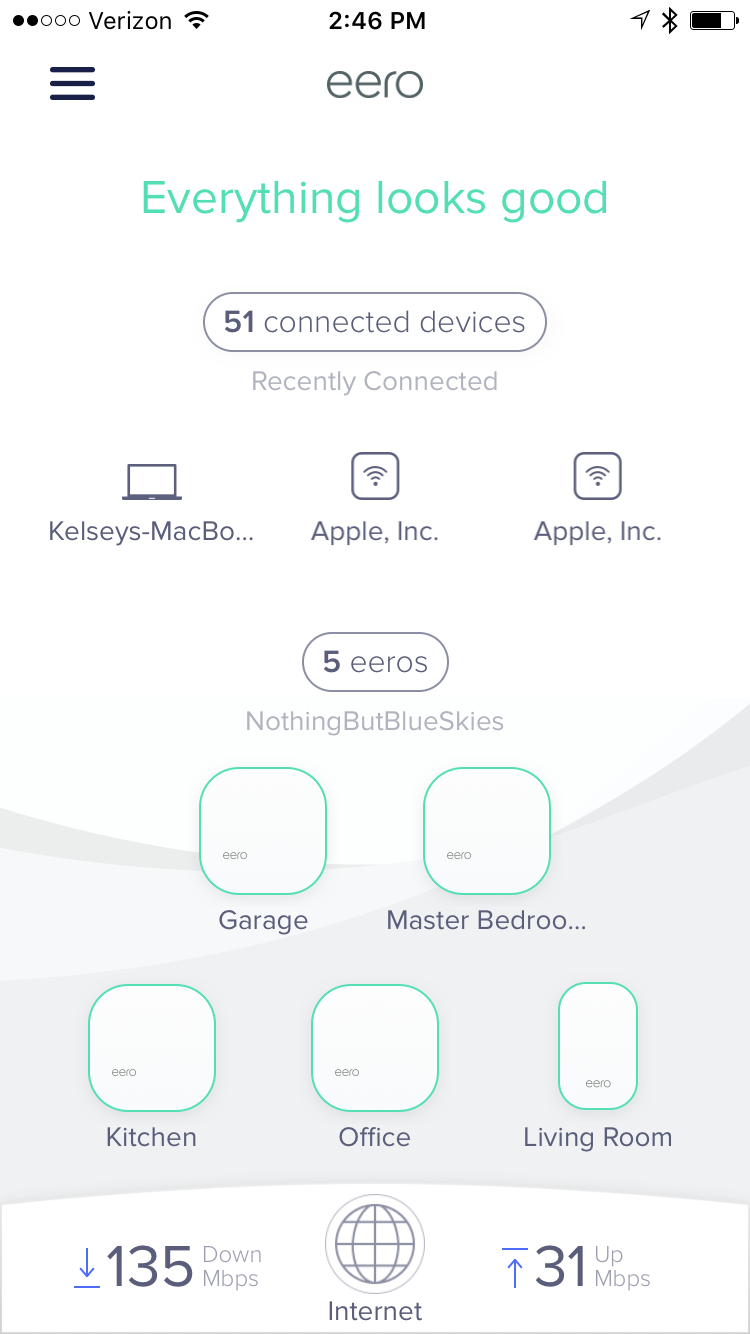 Multiple Eeros with wired connections to the internet

Community, In searching for what I was looking to do, I was unable to find any CLEAR discussions so I thought I would share what I learned here. I have a large house with many floors, built long ago…

FWIW, I had a similar situation where getting an adequate signal from the Eero placed at the opposite end of the house – traversing multiple brick-walls and answers – required me to use several Eero in straight-line configuration.

Orbi. I like how Netgear is expanding it’s offerings with

Ideally for a clean setup you’d want to buy into a system that doesn’t just have the latest flavor of Wifi but gives you the flexibility to add different components into the system that reduce clutter and increase performance.