Who Are You? Apps Anon!

Too often I have a cursory look at software and see a web page someone has put a lot of care into, … but it is just a window. Whoever is behind this software is “anonymous”. I find some of this branding just strange. It is a global world and I would like to know who you are! Some developers choose not to say if they are in New York, Moscow or Paris. How can you trust these outfits, … and some are not fringe providers of Apple software, …

Some devs just want privacy… we’re code monkeys, not celebrities. Where we live or what we look like should be irrelevant to the software, except in some cases relating to user data/privacy (in which case it’s more about “where does this app host your data” than “which part of the world am I in”). Sometimes devs want to build a more “personal” relationship with their customers - but that’s not everyone, nor does it really need to be IMO.

…the irony being that many (probably most) of them seem to have no qualms about spying on their users and collect data about them by including various analytics and trackers in their apps. Whereas the ones that do respect users’ privacy and don’t collect such data seem to be mostly upfront about their name, identity or jurisdiction they‘re subject too.

…the irony being that many of them seem to have no qualms about spying on their users by including various analytics and trackers in their own. 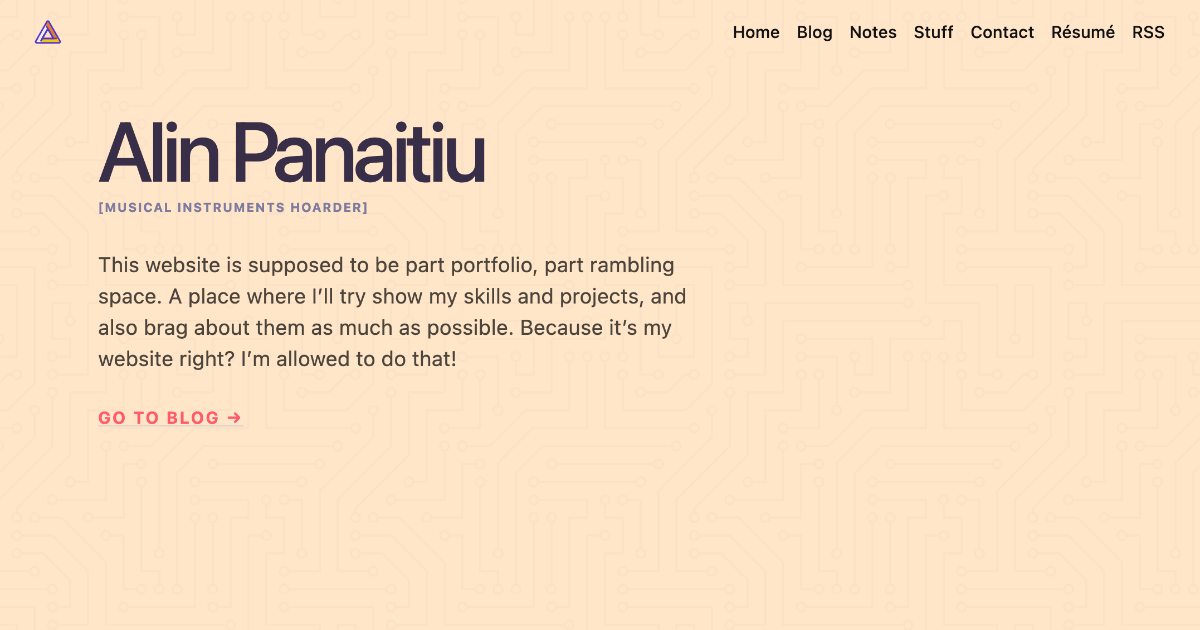 This website is supposed to be part portfolio, part rambling space. A place where I'll try show my skills and projects, and also brag about them as much as possible. Because it's my website right? I'm allowed to do that!

the guy behind The low-tech guys and

Romania and I started working full time on macOS apps 1 and a half years ago.

It all started with creating Lunar in 2017 to avoid fiddling with the annoying joystick of my LG monitor just to change the brightness (which is such an important need, that I’m still baffled it’s not provided as an Adaptive Brightness function in most monitors)

When I got really sick of doing work for companies that don’t really care about my work, I started putting my creative ideas into macOS apps (and asking money for them so I don’t have to go back to a daily, mostly useless job).

My apps are usually supposed to:

macOS app development is a lot harder work than the web dev I was doing before on much bigger money, but I’m mostly in for the peace of mind and really don’t care about getting rich with this.

I like taking breaks whenever I feel like, and not feeling guilty about using my time for my other interests like playing the Romanian Kaval (not me in the video, it’s just so you can see what a kaval is), composing guitar instrumentals, or doing woodworking projects:

I would add that some devs want to dev, and not maintain websites.

It is pretty easy from my side.
A software, where I could not get informations about the developer, is not going to find its way onto my systems!
If someone is offering a product, there is no “privacy” about that at all!
In our days you have to open software on your systems a wide range of access to your own data, and I expect it as a minimum level of thrust, to at least to know who developed a software, is responsible for that, and has access to my data!
No one would really consider to let someone completely strange, with a Full Face Mask on his head, into your bedroom!
So why should someone expect to be let into your private data, without at least a minimum of information about his background!?

Where we live or what we look like should be irrelevant to the software,

From my point of view, it is true in the way you described it, but not in general!
It makes a huge difference, if the one who is responsible for the software you use has his business for example within Europe or North-America, or if he is sitting in Pjöngjang, Peking or Moscow!
I don´t care about how the dev looks like, but I want to know where he is doing his business, which laws and privacy protections apply, and if there are hints onto a danger of a criminal misuse of my data or system!
I don´t want to end with my systems as part of some russia Bot-nets, or get my banking account informations delivered right towards the “Bankers” of Kim-Jung-Ill!

How can you trust these outfits,

I don’t. The first thing I do when researching non iOS software is look for the name and address of the company/developer.

Some devs just want privacy… Where we live or what we look like should be irrelevant to the software,

That may be true for open source software. But I agree with @Ulli that, in some cases, where a developer/company is located might matter. Besides, I like to know the experience and reputation of the developer(s), if possible. Especially with software like password managers.