Why does the forum UI differ on the same iPad?

For quite some time the forum UI looks different at different times on my iPad. Today it changed within minutes and I was finally smart enough to capture them both: 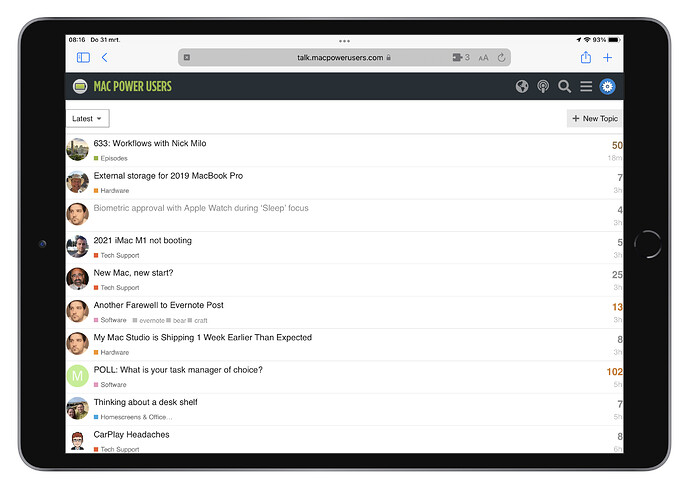 Some kind of A/B testing with completely random switching between A and B?

Any way to force the second UI? (Which looks much better to me)

The first is the Mobile view and the second is the desktop arrangement. I don’t know why it would suddenly change though.

I’ve had the mobile view load occasionally on my iPad in recent weeks. A reload gets it back to the desktop arrangement.

Did you enable the “Request Desktop Site” in Safari?

I’ve seen this on and off since I got the 2018 12.9” iPad (so for a few years.) Not every Discourse forum does it, but at least a couple do. https://meta.discourse.org/ would be interested but I think they’d want more information than just screenshots.

I’ve had the mobile view load occasionally on my iPad in recent weeks. A reload gets it back to the desktop arrangement.

A reload gets it back to the desktop arrangement.

(I have been force-quitting Safari to get the desired UI…)

It could be because at some point (either first load or after) the iPad gets rotated to portrait view. That switches into mobile view and perhaps it isn’t switching back when you reorient to landscape.

Is there a reason you’re not using the Discourse app?

It is merely a web wrapper from what I can see, but I prefer it to the using it via Safari.

I can’t tell you why though. Just a feeling.

Because it’s just a wrapper…

I like Fig much more, but development seems to have stopped…

I never liked Fig, it just didn’t work the way my brain does.

IMHO fig is not bad per se, but is pretty unnecessary given discourses front end capabilities when using an iPad (i dont’ do forums while out and about). Only thing to adjust is the font size in Safari.

Oh, I didn’t say it was bad, just that I didn’t like it. I realise many do. Each to their own.