I know this isn’t Mac related but I figured if anyone would know this it would be someone in this group.

I’ve always wondered why I can’t seem to find a way to buy the audio, e-, and paper version of books in a bundle. Is there a legal issue? Am I missing something somewhere? Is there a website that does this?

Why earn money once when you can do it - and people are willing to pay for it - three times?

The only thing I have seen is Amazon offering audiobooks as an add-on purchase to Kindle books, but never as an all-in deal

That’s what I was thinking too, but I feel like more people would be willing to buy a bundle than three separate items.

Authors used to sell their rights to the different formats all at once via “standard” publishing contracts. But most have gotten more savvy and negotiate for or keep some of the formats for themselves. Authors have a greater variety of distribution channels these days. Or, they did for a while. However, Amazon continues to consolidate its dominant position in publishing.

Some publishers do - Manning Publications offer a bundle deal for eBook and print (example - I’ve the eBook, but not print, as UK shipping isn’t worthwhile), and No Starch Press does as well. Audio takes quite a lot of work to do, and I’m not sure technical books would benefit from audio.

I guess it depends on the publisher.

I’ve been waiting for Santa to deliver this same gift for a l-o-n-g time. I’d gladly pay some marked up price for the combination print and e-book. I vastly prefer to read digital books, but I’ve never wanted to give up my physical book library. (Books are my most treasured possessions and basically the only things I collect.) I was excited years ago when Amazon developed it’s “matchbook” program, but it never seemed to develop and was ultimately shuttered towards the end of 2019.

As a copyright lawyer who’s litigated and negotiated literary acquisitions and book deals for the past 20-odd years, I understand the legal and business rationale behind this, but I’d love to see a change where those of us who want can get bundles like this. I would think it’s an easy way for authors/publishers to generate more profit from the same sale. But maybe that’s not the case.

I wonder how many people take advantage of the audiobook add-on? I was an audible subscriber for 12 years and only purchased a handful of kindle copies of the same book. All were non-fiction and I don’t recall ever getting a discount.

Audio takes quite a lot of work to do, and I’m not sure technical books would benefit from audio.

Yeah, it’s hit or miss with tech audiobooks. I got a technical audiobook just a couple weeks ago that assumes you’re listening to the book with their accompanying PDF open. “Look at the code sample in Example 3. It’s obvious that…”

Nothing strictly wrong with that, but it feels like they were trying to shoehorn the book into the medium.

I would think it’s an easy way for authors/publishers to generate more profit from the same sale.

I would think the same thing - particularly with ebooks and audiobooks. If the Kindle version costs $15, and the audiobook is $18, I’m much more likely to pick a single format and call it good. If I can buy the “whole package” for (let’s say) $25, I would think the number of people that would buy the bundle would go up significantly.

The marginal cost of those is a fraction of a penny each, and the ability to buy both at a discount would seem to be a nice upsell.

Pew Research periodically polls the U.S. audience on book format preferences. I think the latest result is from 2019: 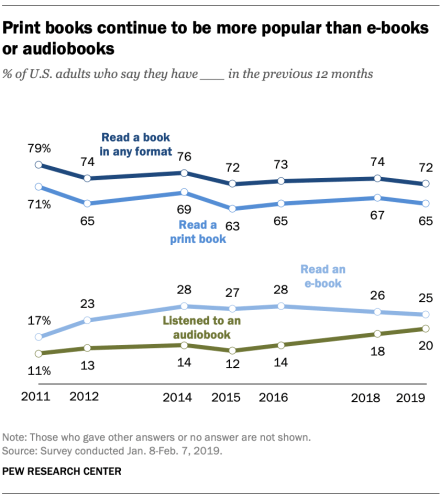 How this affects the question of bundling print+ebook+audiobook is debatable, but I would read this chart as suggesting that not a lot of people might be interested in such a bundle. On the other hand, since the marginal cost of “producing” the bundle is probably minimal, it doesn’t seem risky to offer it.

I believe authors typically get a higher royalty from electronic books than print, and audiobook royalties fall in the middle. That might suggest authors would prefer selling a bundle.

I am an audible subscriber. I get a discount on audiobook purchases and this cost is less than what Amazon would sell.

For those books for which I would prefer a Kindle I wait for some sale on those. If that book is something that would not go down in price, then I will use my digital promo codes for shipping in lieu of 2 day prime delivery. At least some discount on the ebooks in this way.

I would say this chart makes the case that nearly everybody who reads an audiobook or an ebook also reads print books. With just a 7-point gap between print readers and all readers, it couldn’t be much else.

That said … if buyers roughly correlate with readers in that chart, maybe they don’t see much incentive: Yhey may conclude (with information about who buys what) that plenty of people already are willing to buy both.

I don’t think the chart supports any conclusions about concurrency or non-concurrency.

Also worth noting that publishers routinely take haircuts on audiobooks. The effective price of an Audible audiobook is no more than about $12 on average, and Audible presumably makes money on that.

Bundling at that price difference ($12ish) would be revenue neutral.

Not sure how you could have both 65% (regular books) and 25% (audiobooks) be part of 72% (all readers) and not have some overlap. But maybe I’m reading the chart wrong?

What I would like to know is why e-books are often just as expensive as paper books. There have been many times when I would have been happy to buy an e-book (my preference being for paper books) of an expensive specialist tome but ended up buying neither because the e-book was just as exorbitantly priced as the paper version.

Because the PRICE you pay for something has very little to do with the COST of producing that thing.

Because the PRICE you pay for something has very little to do with the COST of producing that thing.

That’s true. But with modern typesetting, I would assume that by the time the print book is ready to roll off the presses, the ebook is basically already done. I would be shocked if that isn’t automated at this point.

That basically makes the cost of the book the cost of producing the information in it (author fees, editing fees, cover design, etc.), and the aggregated layout cost of the ebook and print book.

So if pricing was just based on cost, I would expect the price of an ebook to be some formula based roughly on:

And on balance, I would expect that to tip slightly in the direction of ebooks being cheaper.

Now we’re moving from “cost” to “value”. And I’m not sure how many situations there are where the value of an ebook significantly eclipses the value of the print equivalent, although I can note at least one.

Digital book publishers a ways back were talking about making library-purchased ebooks “expire”. The idea being that a physical copy of a book gets worn out or destroyed by continued checkouts, so an ebook should basically work the same way. The problem was that the publishers set that limit ridiculously low, so effectively the library would have to keep purchasing and purchasing the ebooks if they were popular.

For a book in heavy use, an ebook wouldn’t ever really wear out. I don’t think that would apply nearly as much to typical users though, especially since most people don’t ever read any given book until the pages are falling out (unless they really, really don’t know how to handle a book!)

And there’s always the built-in negative that ebook licenses typically aren’t transferrable. So if you buy:

for $90 in print, you can sell / give that to a friend / future student studying the same field and theoretically recoup some of your costs. If you pay $90 for the ebook, that’s it.

Not sure how you could have both 65% (regular books) and 25% (audiobooks) be part of 72% (all readers) and not have some overlap. But maybe I’m reading the chart wrong?

I think you are (reading it wrong).

I can read a paper book and listen to an audiobook and check off both categories on that survey. My answer would be the same if those were the same books, or different books. Either way is covered. The survey did not ask their questions in a way that would surface people who consumed the same book in different mediums.

For me, I may have read 25 books this year. Most were e-book, a few were in print. One or two of those may have been in both formats, but it’s rare for me.
AND - I suspect - it’s rare enough that publishers see no sufficient market there. Given Amazon’s massive data, if there was a market for it, they would have bundles everywhere.

One other data point. Amazon would rather sell Audible subscriptions than independent books, at least that’s my take. So while you can buy audio books as an add-on, it’s priced crazy. One random sample showed Kindle $13, Hardcover $18, Audiobook $30. But if you start an Audible trial, the audio version is free!

Forgot to add - here are more stats on books/ebooks. Starts w/ that same Pew survey but goes into much more detail: 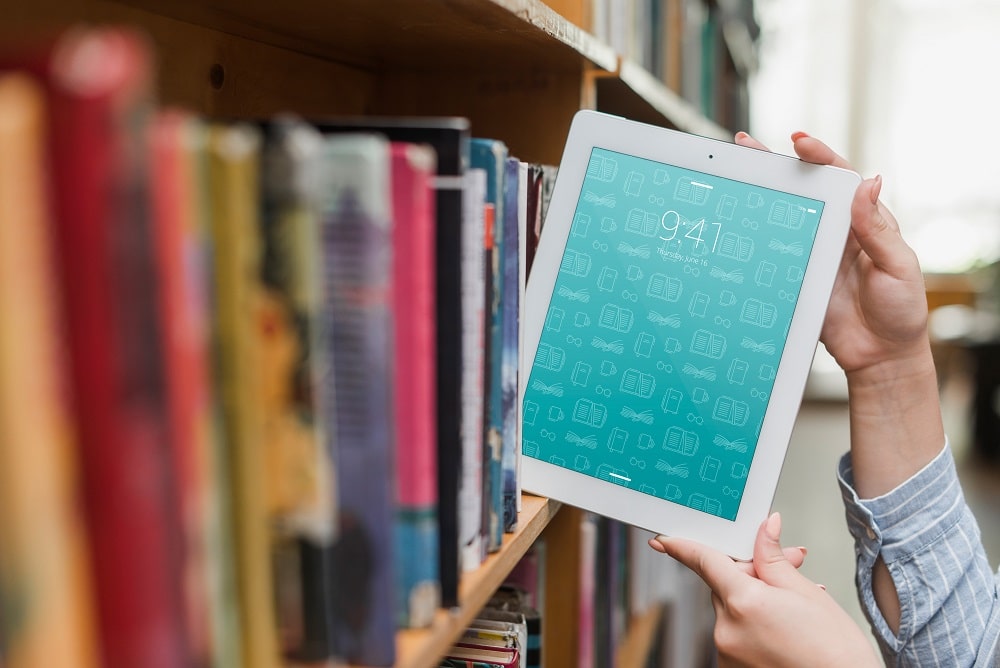 Print book vs eBook statistics show that print books are still the most popular reading format and the biggest money maker for book publishers.

I think you are (reading it wrong). I can read a paper book and listen to an audiobook and check off both categories on that survey.

That’s my reading of the chart too. It’s not a preference survey, but more of a “check all that apply”.

So while you can buy audio books as an add-on, it’s priced crazy. One random sample showed Kindle $13, Hardcover $18, Audiobook $30. But if you start an Audible trial, the audio version is free!

And once you’re an Audible member, unlimited credits are essentially available for about $11-$12 each. Subscribe to any plan for at least 30 days (i.e. one renewal cycle), and when you use all your credits Audible gives you the option to buy a 3-pack of additional credits for about $35.

In the age of Audible, “retail” audiobook prices have essentially become an elaborate fiction.