Why use nvALT on your MacBook

Why use nvALT, if you can send ideas, thoughts, tasks directly to OF on the Mac?

Using nvALT is a very simple note taking app which includes the ability to write a note in markdown, then reveal the full formatted text using marked2 and other programmes.
It has a very simple workflow which quickly becomes second nature, and provides a fresh method of working which is a stimulus in itself.
I use it because i want a bare bones app to quickly draft notes for use in whatever subsequent programme i decide.
It is enjoable to use too, and that plays a part in most software decisions I make.
You are probably right to say that it is not needed for use with OF, though obviously it seems it can be used that way.
I really want an equivalent to Drafts5 on iOS and so have the two programmes (nvALT and Drafts5) save files to the same place so i can start in one app and continue in the other.

Thank you, your message was extremely helpful. I appreciate you giving of your valuable time. Hope you are having a good week.

I view those as fundamentally different apps. To me it’s like asking why use a text editor to write a blog post or store a snippet of code when there’s already a place to enter text in my calendar.

To be fair, I did at one point attempt to use OF to store lists of the ‘books to check out’ variety, but I found that to be unuseful - I never see that list except during a review which is not when I have time to do anything about it, and it was much less accessible or searchable buried in there. (I don’t need most of my 600 notes from the past 8 years very often, but I need some of them every day, and it’s worth preserving a few MB of text for when I do need to look up something old.)

If Drafts could put its notes into my existing pool of notes, that would make it more helpful to me. I was intrigued to hear about Drafts-for-Mac, but I’m not super excited about them being kept in the mysterious drafts-aether.

For me, OmniFocus is only for tasks I will eventually check off, and nvAlt is a searchable bin I throw text into. So when capturing, I think: “is this a thing I need to be shown to me again so I can act on it?” If yes, it goes in OF. Otherwise it goes in nvAlt. So things I will look for at my convenience, like lists of novels to read, half-written letters, code snippets, etc. go in nvAlt, and don’t really seem appropriate for OF.

Also, because nvAlt stores its data as plain text files in Dropbox, it’s easier to read and write to those files from elsewhere, such as Workflow or 1Writer on iOS, or shell scripts on macOS.

@Shl1ck: How do you use Drafts to work on a file created on the Mac?

Sorry @Robert. I mean I can start the file in drafts5 then apply an action which saves the draft to an nvALT folder on my Dropbox account. This is the goto place for nvALT to open the same file. It does not work the other way around. Sorry for the misleading comment.
There is a problem I have with nvALT: when I use the Dropbox folder for this process an annoying request keeps appearing.
It was discussed in this https://github.com/ttscoff/nv/issues/514

Hopefully this will change with Drafts for Mac!

I’ve never used nvALT but I imagine the same thing happens in Drafts 5. If I wanted to quickly enter a bunch of tasks in OmniFocus 3 on my iPad, I would have to go to OmniFocus and create a new task, hit the Save + button and keep adding new tasks.

Sometimes it’s easier to go to Drafts 5 and rapid fire a bunch of tasks. Here’s an example of what I typed into Drafts 5:

The first line is the project name. The next few lines are indented and will be the tasks inside the project.

Hit the Drafts button icon at the top right ( the square outline under the battery icon).

I installed a Taskpaper to OF action in Drafts 5. I tap on this line.

I can save it as a new project. I can choose to put it inside a folder or inside an existing project. 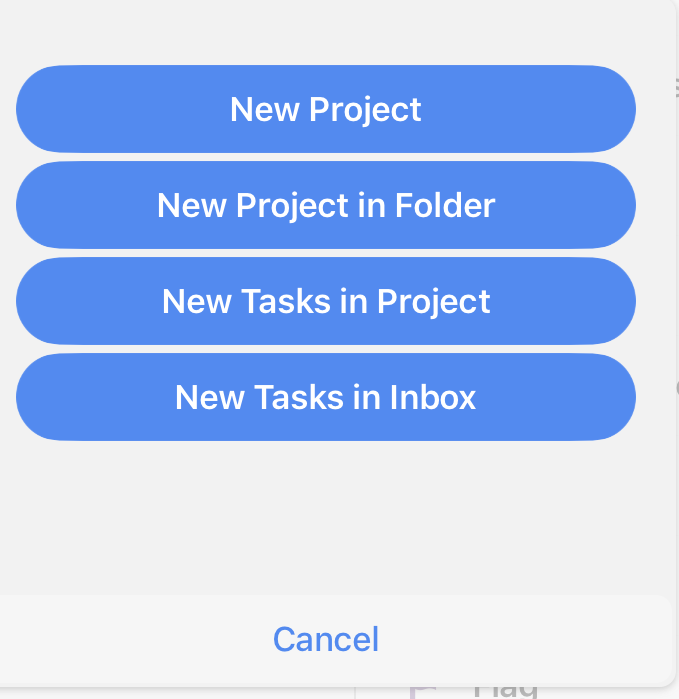 The beauty of using nvALT or Drafts is to rapid fire type away a bunch of actions quickly. you don’t stop to use your mouse or tap on the iPad.

In Drafts, you can have pre-designed project templates and send it over to OmniFocus. It’s a nice way to keep templates outside of OmniFocus. Then create it when you need to.

If you use it a lot, you can also learn the TaskPaper syntax and it will add the tags, due, defer, etc.

I’m excited to see Drafts 5 coming to the Mac. It’s been a godsend on the iPad.

Thanks Wilson, you are the best! I will follow your recommendations & thank you again!!!

Hi Wilson: Do you suggest using this site, to learn and implement TaskPaper into Omnifocus? please let me know, and thank you again

This is the official guide for TaskPaper to OmniFocus…

It takes a while to remember the tags. It was the same process for me when I was learning Markdown. After a few weeks, I had a pretty good grasp of Markdown. If you repeat it enough times, you’ll get the TaskPaper syntax absorbed.

But there is a Drafts action group provided by @RosemaryOrchard to help you with TaskPaper in Drafts. I’m going to guess that it should work the same whenever Drafts 5 for Mac comes out.