Wooshy App - Search/Return instead of Mouse

Anyone using this? It’s in alpha, but I am already impressed by its approach to navigating the entire OS with the keyboard instead of the mouse.

Wooshy searches the whole macOS UI—including the Dock, the left menu bar and the right status bar—and clicks. Ditch the mouse and keep your lovely fingers where they belong.

Doesn’t seem to work here though! tried to Wooshy to reply but didn’t find it.
Seems pretty good, need to get used to doing it though

feel free to send feedback or ask questions. ROADMAP for v1 is pretty solid, but could always do better.

on which page? what did you type? which browser? i’m replying here using Wooshy. in you’re on Firefox, Firefox is returning wrong AX data on second monitors. long shot but… 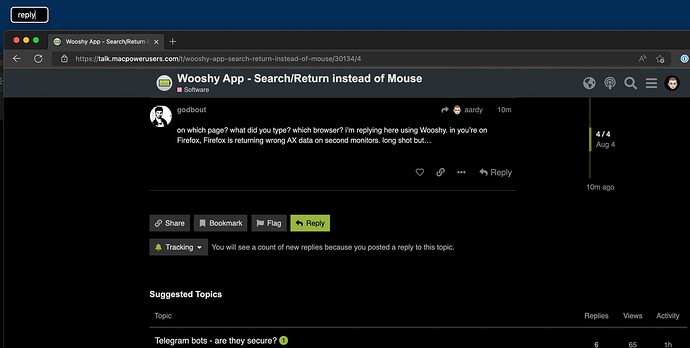 by edge you mean… Microsoft Edge?

Wooshy needs the Accessibility elements to be exposed. my guess would be that Edge doesn’t expose them, or at least not by default. lemme do some Googling.

have a look at this: Accessibility features in Microsoft Edge

enable Accessibility, and it should be better. that being said, i haven’t tested Edge. also because of the nature of the project (dealing with Accessibility, etc.) and the load of apps that don’t support it properly, some apps have to be “curated” (usually Electron). if you find an app that doesn’t work, you can send an email/drop an issue on the GitHub repo from the Wooshy’s menu icon. then i’ll investigate and add in the next release. (currently daily alpha.)

Edge support added to a11 coming later today. but eww. i’m on Ventura that detects stuff install in the background and Edge is installing several stuff without even asking or letting the user decides. eww eww eww. Microsoft doing Microsoft stuff again. the implicit rule is to ask for users at install, and/or let them switch on stuff in the Preferences. eww.

Yup, Microsoft Edge.
Restarted it and seems to be behaving a bit better. First restart after installing Wooshy.

usually web browsers, except Safari, don’t have their Accessibility tree exposed by default, because they’re absolutely slow and greedy with resources when they activate it. there’s some special attributes to be sent to browsers for them to programmatically ask them to expose the tree. no idea if Edge responds to this. i’ll add it to the list of app to investigate for the next release. thanks.

Using Wooshy to reply to this message right now! I wasn’t understanding how it worked (it’s straightforward, but I had to learn that it searches metadata not just text, so it grabs things I wouldn’t think of) until I got a very helpful and quick response from the maker.

I wasn’t understanding how it worked (it’s straightforward, but I had to learn that it searches metadata not just text, so it grabs things I wouldn’t think of) until I got a very helpful and quick response from the maker.

Might be worthwhile to repeat that here? (If you both agree that’s fine)

If you have a look at the docs page, there are some handy search “narrowers” and a key reference for navigating and clicking.

For example, control return with no input (no search term), will give you right click at the mouse pointer. And you can navigate the context menu with arrow keys.

yes. Wooshy is pretty straightforward but there’s still some stuff to know. the manual is pretty short. but some things are subject to change, depending on users’ feedback, and my own use. for example, some sort of fuzzy matching will be coming before the beta (if it doesn’t pollute the targets).

also beck, in your specific case with the metadata. the reason why Wooshy is in alpha is because it’s missing an important feature: (all the rest of the engines are there and solid.) there’s gonna be a way to hover on UI elements, and get a popover telling you what are the matching terms that can reach that element. it will be quite useful for the menu bar icons, various other icons in software, webpages, etc. planned of course because Wooshy goes in beta. thanks for reaching out!

Hope the pricing works out for you (it makes me doubt whether I should try making Wooshy part of my workflow, but hey, I’m kind of frugal…).

This looks great, thanks – will give this a go.

Was a long-time user of Shortcat app, then Vimac (no longer being actively developed, I note – now Homerow). The latter works well, but goes the route of overlaying “keywords” across anything that can be activated on-screen, that must then be typed to trigger.

Wooshy’s “live-search” is closer to how I remember Shortcat working. Hope this gets viable!

[EDIT:] Oh wow. Writing this post, had me go look at Shortcat again, which appears to have arisen from the dead! See it has been updated to Apple Silicon, and has some much needed attention given to its homepage.

Downloaded it now as well again – will experiment with both. Fantastic that this space is seeing so much attention, really feel it is an underutilised element of UI control/efficiency, that deserves attention.

But while I like the search paradigm a lot, I still miss the hints (as in Shortcat, Vimlike, Vimium et al.) for:

best is probably to go to the site: https://wooshy.app

down below you have a short video showcasing Wooshy. (you can refresh the page, random videos so you may end up with another one. only three currently.)
you also have a couple of links: YouTube channel showcasing features etc., and the GitHub repo that has the README and where issues are tracked.

thanks. yes, subs are not people’s favorites. but i’m planning to maintain and sustain my apps. for Wooshy, there’s similar alternatives that are one time payment, like Shortcat and Vimac/Homerow. good luck!

Where are the different payment options? Can one purchase a license now already, off the website?