Would you pay twice as much for your Apple gear?

To make buying decisions, my frugal grandfather had a saying: If something is so good you’d pay double, you should purchase it. Otherwise, you might better not get it.

Applying this to my Apple gear, I can only think of two things I’d pay twice as much without a second thought: My AirPods and my iMac. I get so much out of them, I’d happily pay double.

Borderline would be the iPad. I’d trade down from the iPad Pro and pay double for the iPad.

On the flip side of the coin, there’s one piece of gear I would not buy (again), even if Apple gave it to me half-price: The Watch. I just returned the new Watch 4 - I simply did not “get” it and I would not even want one for free. Borderline would be the Pencil.

Everything else seems fairly priced.

That’s a bit tough…Apple products are premium items already and paying double is a stretch. I’m happy to pay top dollar for the benefit of good manufacturing, but there’s a limit.

Apple products that I think are good value though, ones I’d recommend to my non-techie family who just want to get a decent product at a good price, they’d be the 9.7" iPad, Airpods, and, I speculate iPhone XR. My wife would add the Pencil, but not for me.

Certainly not the Watch (I do like mine), not the notebooks until they fix the keyboards properly (amazing machine the 15", but I’m saddened looking at my keyboard protector), not the Mini till it’s updated (though I just gave mine to my parents and it’s great for them), not the iPad Pro or iPhone XS (overkill).

Apple has already priced (in general) their products where I think about the purchase.

I recently purchased the iPhone Xs, and that $1000 price point made the decision more than a “just get it” decision. I would not have purchased it at $2000.

@velt, One thing to consider is that with your Grandfather the pricing models were not so tuned to the market (maybe he is taking this into account). But, I see many companies now push the pricing right to the edge. I understand it, but I am not sure those value purchases from 20 years ago are as common.

Example 2 - I purchase older iMac work stations for about 1/3 the cost of new, and I think they are a great value. I would not purchase them new. They are too expensive to justify.

Value for money = Satisfaction minus Price.

Would I pay double - Nope!

As it stands at the moment, the result of Apple’s aesthetics/design decisions is unreliable machines with perceived high failure rates and high repair costs that include expensive features that people are struggling to find value in / use for.

Like many others, I am nursing my old macbook and will continue to do so until it dies (and I have no choice) or Apple deals with several issues. I was ready to buy a replacement in 2015 and held off, then Apple banged the price up and removed the function keys - I am so glad I waited given the issues that Apple have had - but Apple have lost a full machine upgrade from me in the intervening time.

Why haven’t I bought (even though I want to):

In fairness to the last item, Touch ID would be of value to me (just to reduce the number of times I have to enter my (very long) 1Password), but I had the equivalent of TouchID well over a decade ago in a (low cost) thinkpad - Apple should have had it as a stand alone item ages ago.

The neglect and hubris of the mac is now reaching the phones - more and more people are looking at the cost of ‘upgrade’ and saying - meh, this one is good enough - I’ll wait till next year.

The biggest strength for Apple is the ecosystem mac-iphone-ipad (& watch?) - Once someone using the ecosystem as a professional tool breaks out of the infrastructure (e.g. they can’t trust the reliability of the MAC, can’t justify the price premium or their employer won’t stomach that premium any longer) then the house of cards starts to crumble. If I switch from mac to PC (which would give me a better version of Excel until the point that Microsoft pull their finger out and deliver Power Query on the mac) then I would use something other than Omnifocus as a task manager, that reduces my ties to the iPad/iPhone so when one of them needs replacement other products are now considered…

I think we are at the point of cards crumbling now - hopefully Apple pulls itself back from the brink at the event in a few days time, not least because I’m not sure my macbook will let me wait for another year

and I really don’t want to go back to WIndows unless (effectively) Apple forces me to do so.

I’m not sure I’d agree with all of that, as I think the phone division is steering admirably clear of hubris. But I definitely see what you’re driving at with the Mac.

Yes, the iPhone XS is over-specced for most use but there’s a plethora of other options that perform well. In fact Apple’s commitment to speeding up my iPhone 6 with iOS 12 means I’m only going to upgrade to an XR because I predict it’s another great time to buy. And so my wife is getting a great phone passed on and I’m getting the fastest phone that exists (I think) for a very reasonable price.

Apple has also highlighted in its own keynotes on multiple occasions that it wants people to hold onto phones longer. I hope my XR will last me 6 years, not because there’s nothing better to buy but because there’s no need to buy. And having lived through the birth of this market, that’s such a nice hope to have.

I also hope my 2017 MBP will last me another 6+ years, but I think it’ll need an external keyboard to help it along!!

Macbook Pros, yes. iPhone, yes. iPad, no. AppleTV, yes. The watch, yes (but admittedly an edge case; depending on its role for me in spurring more exercise.)

No to the whole Apple line. They already are pushing past the point of diminishing returns.

I think Apple’s prices are already doubled, so probably not.
I would try to suffer through with an Ubuntu laptop or something similar, though interacting with others would probably require Windows, which would make me throw up a little every time I used it. 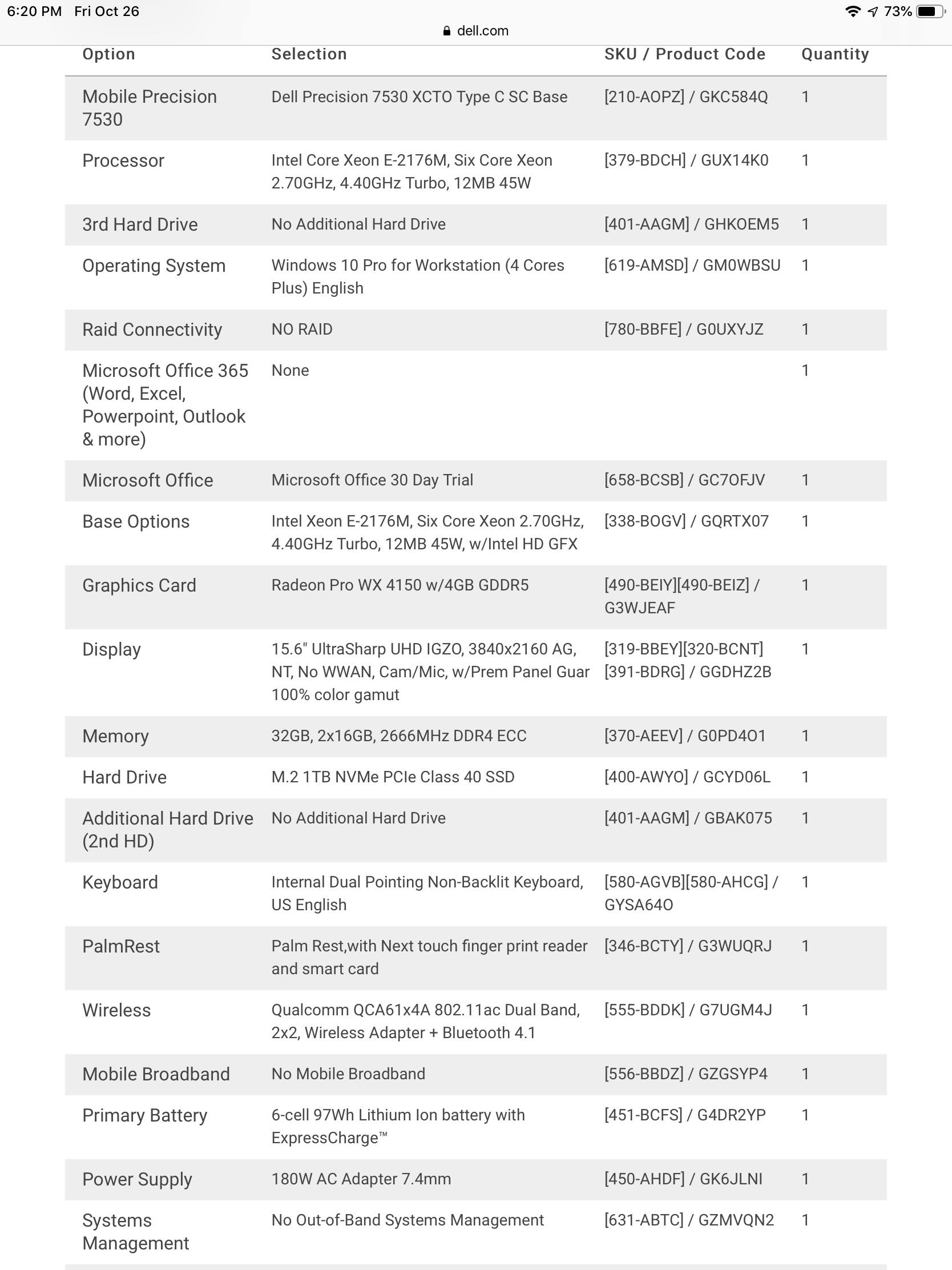 No. In times past, I could say mostly yes. But, the current hardware and software options makes me want to not pay more.

Thanks for all your feedback - very enlightening.

I certainly do not want to pay double. I would for the AirPods - if Apple doubled its price and mine broke, I’d gnash my teeth and buy another pair. For the iMac, I would hope for an iMac Pro, but I would pay double, because if I had to renew software licenses in addition to hardware cost and (re)learn a new OS, it might get very pricey indeed. Not sure I could afford it, though.

Would I pay double for Apple gear? I’ve been an Apple fan since I used my first LC in '91. Purchased the first iPhone for $800 - before Apple realized their mistake and dropped the price to $600. Managed hundreds of Macs & Mac users over the years, and never hesitated to recommend Apple products when they fit the users needs.

Today, I warn people about MacBooks. Without AppleCare, they are basically totaled if anything goes wrong once the warranty runs out. iFixit gives them a repairability rating of 1 out of 10.

The new iPhones are more expensive to buy and repair. And more fragile than earlier models.

Like some other commenters, I think twice before making my technology purchases these days. I’d like a better camera in my phone, but that alone isn’t worth upgrading. All three of the new iPhones are larger than I’d prefer and that alone is keeping me from upgrading this year. And given the initial success of the iPhone SE, I wonder how many others have reservations about their size.

No, I would not pay double for any Apple product.

I think part of Apple’s genius is in their pricing quality products right at - or over - the line of price/performance. I’ve almost never bought an Apple product and thought I got a bargain (last time was a $1400 ‘Quicksilver’ G4 Powermac minitower in 2002). On the other hand, I rarely feel I haven’t gotten my money’s worth on a quality product.

Personally I’d choose that option over whatever computer the OP’s grandfather would have bought.

This is an interesting question. My first response was to think I wouldn’t. And then I realized that 30+ years ago I spent more on my Macs than I did for my 2017 Macbook. So definitely yes on the Mac, though I probably wouldn’t have both an iMac and Macbook. The iPhone would be more of a stretch only because I still hate having a mobile phone. But I’m all in on the Apple ecosystem, so if I’m going to have a mobile, that’s probably a yes too.

Unreliable?!? Really?!? You must have horrible luck, Phil. My family and have owned dozens of Apple products, various versions of MacBooks, iPhones, iPads, iPods, and AirPods. Their performance and reliability - relative to the cheap toys sold by HP, Microsoft and others - have been an order of magnitude better. If you struggle to find value in Apple, spend your money elsewhere. Perhaps a Chromebook. (Or are you afraid you’d regret it?)

Meh. The entire premise of “would you pay double” is ridiculous. The entire exercise seems to me to be a way to make people who can’t really afford the products at the current price feel better.

The price is what it is. If the product fills a need and I can afford it at the offered price, I’ll get it. It shouldn’t be any more complicated than that.