4k or Ultrawide for MBP + HDMI

Here’s yet another monitor question. I’m looking for a monitor that can be shared by an MBP with Thunderbolt and a Windows laptop with HDMI, with a way to switch the inputs. So the LG Ultrafine 5k and 4k from Apple won’t work as they only have a single USB-C connector and no HDMI.
I am also interested in an Ultrawide. However, as far as I can see, ultrawides are mostly cut down from 4k. For example, they may be 3840x1600 (e.g. Dell U3818DW) or 3440x1440 (Dell U3419W), so they are not “retina” resolution. The exception is the LG 34WK95U, 5120x2160, which did not work with 2018 MBPs when it came out. I read that Mojave 10.4.2 would fix this, but have not seen reports that the issue was fixed. I also read that you can’t run this monitor at full resolution over HDMI, and so I’m wondering how switching would work with the two computers trying to run the monitor at different resolutions.
So - does anyone have a recommendation for an Ultrawide that can be shared by Mac and PC as described? Or a good reason for 4k vs Ultrawide?

I am using a LG 38WK95C, Ultrawide. I chose this ultra wide because it comes with a USB-C which allow me to connect to a MBP 13” (without Touch Bar) and it acts as a secondary display to the MacBook. Also, that single cable charges the MacBook and that works beautifully for me.

The monitor also connects to my Windows desktop machine via HDMI ports. With a push on the LG monitor joystick button, I can switch between Windows and Mac. LG also have a software that allows me to display both Mac and Windows side by side on the sameness monitor.

I’d suggest Ultrawide vs 4K if your primary use of the monitor is for productivity as wide screen really allows a huge real estate to cater to many opened windows.

For a 4k option, the Benq SW271 seems to be getting rave reviews in several of the photography forums I follow. It’s a bit more pricy than other 4k monitors though due to the high colour accuracy, not sure if that’s a consideration for you?

Thanks - definitely a good candidate for the photo side of my life, as well as connecting to the pc. I see it doesn’t do power delivery, but I don’t need it as I already have a dock.

Thanks for the report. However I see from comments on a recent Appleinsider article that there is an unresolved compatibility issue with my GPU.

I thought it did do power delivery… [googles]. AH! Looks like it’s only 10watts; so effectively not then.
Glad you pointed that out, it’s just knocked it off my wish list.

Lol! Well the other thing I am running into is that I like to interview candidates in person in stores and then buy them in stores if at all possible. However my local Best Buy and Micro Center don’t keep this sort of thing in stock at this time. I don’t want to buy this sight unseen.

recent Appleinsider article that there is an unresolved compatibility issue with my GPU.

Do you mind sharing a link to this article. I wonder what compatibility issue. I’m using an nVidia card which seems to work fine, so far.

That’s understandable! Not sure if Benq are attending photography trade fairs in your part of the world but that’s what put me on to the brand in the first place; they had a stand at The Photography Show in Birmingham(UK). The SW320 (32" version of the SW271) was on their stand and it looked absolutely stunning. Long shot, but perhaps there’s similar opportunities for you to see one “in-real-life” somewhere near you.

I’m curious why the windows and Mac?

I’m curious why the windows and Mac?

Work gave me Mac notebook. My own Windows desktop is for PC gaming. With this monitor, I could game and work.

Windows for work, Mac for home. Sometimes I work at home. 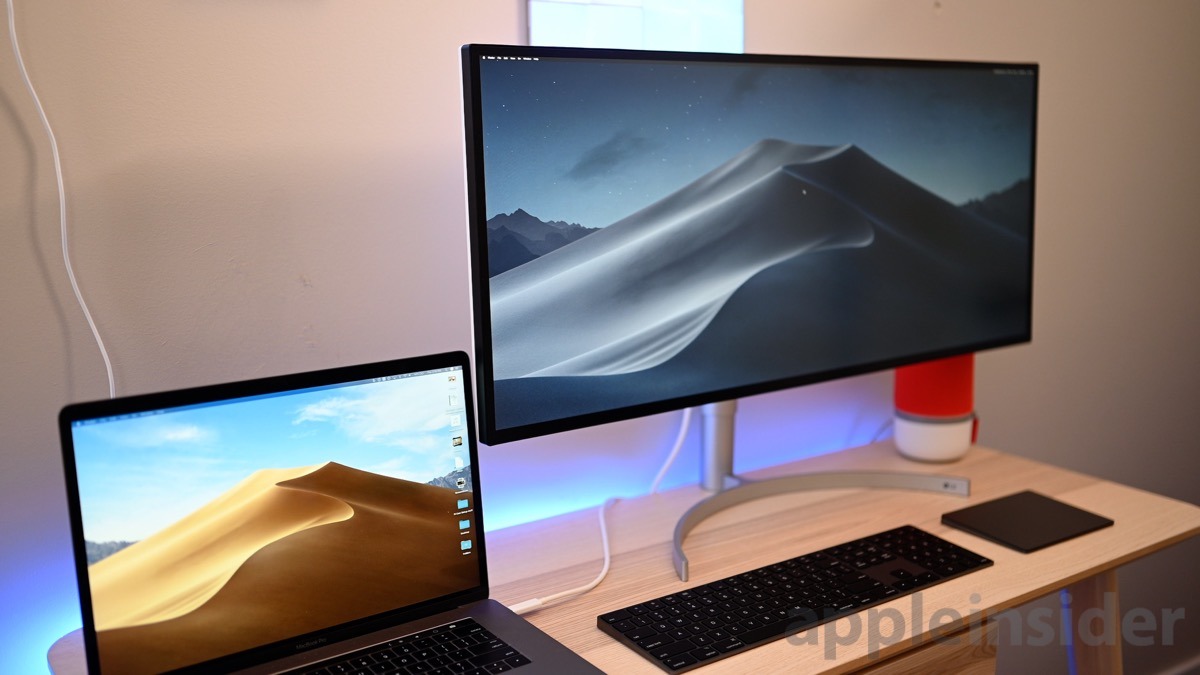 LG has been catering to Mac owners for years, and the company's UltraWide 5K2K display is a great solution for creative professionals who want a bit more horizontal real estate.

This is where I heard about it! https://www.youtube.com/watch?v=1xcjN-e-TUo

Good channel is that, been following him for a while!

That LG 5K2K looks fab too, that’s another strong contender for when I get my office space built!

I have this same monitor (LG 38WK95C-W) along with my new Mac Mini (I finally retired my 2012 27” iMac along with a 2nd Dell 24” monitor next to it). So much cleaner on my desk now just having this 1 huge monitor - and I don’t miss having a 2nd monitor at all (I don’t need it). The monitor stand is perfect as well…does not take up much room at all and I can place all of my other things easily on my relatively small desk.

One thing that is bad though about this monitor - do not plug in any hard drives into the back of the monitor’s USB ports (I use the USB-C connection)! I had my Time Machine external drive plugged in and it would always disconnect itself every time I woke my Mac Mini from sleep (for whatever reason it would forcibly lose the connection to the drive and then re-connect, giving me that horrible disk ejected improperly message). I think this is why my Time Machine drive kept getting corrupted and I couldn’t figure out why - now I know. Took me weeks to figure out. So now all I keep plugged in is my Logitech unifying receiver for my mouse and keyboard, along with my Logitech Brio webcam (both work very well being plugged into the monitor itself, with full resolution to the webcam). I wish LG would fix the external hard drives issue with this monitor - it’s so weird that it forces a disconnection for a short period of time when waking from sleep.

onitor also connects to my Windows desktop machine via HDMI ports. With a push on the LG monitor joystick button, I can switch between Windows and Mac. LG also have a software that allows me to display both Mac and Windows side by side on the sameness monitor.

I just bought the 29 inch gaming monitor, Did you managed to accomplish to display both Mac and Windows (Display Port and HDMI) at the same time. Any ideas or input on how to do it. I download the official control center from LG but can’t find where I can do this.

It’s doing the same for me too. I have my mechanical keyboard and mouse plugged into the back of the monitor, on both USB-A ports. When I wake up my (Windows) machine, I can hear sound that it made when one plugs in a new plug-and-play device. And I have to wait a second or two after the device is identified before I can use the keyboard. So, it is irritating and I’d imagine it to be worse on a Time Machine external drive.

I haven’t considered this yet - how about setting up the monitor to “Never” goes to sleep? There is a setting in the menu where it will auto sleep every 30 min, 1 hour or 4 hour. I remember seeing a “Never” option.

Did you managed to accomplish to display both Mac and Windows (Display Port and HDMI) at the same time.

When I first have my monitor, I have done this before. You need to do it in the monitor settings (press the joystick and use the menu). There is an option to split screen and choose Display Port for the left screen and HDMI for the right screen.

My awesome reseller has a demo unit of the LG 5k2k, and I managed to test it with both my Vega 20 MBP and my windows notebook connected simultaneously. It’s easy to switch inputs with the little joystick hidden at the bottom of the display. The MBP worked fine using the native resolution. The windows notebook set the display to its maximum of 1920x1080, which results in 16:9 being stretched to 21:9. However, it suits me to have one display that’s as awesome as my MBP and works with the windows notebook as well.

I did try various options with them all leading to the same outcome (Auto Standby off, Smart Energy off). Nothing would change the outcome. I finally got frustrated and googled it and sure enough others have this same issue. I have since moved on and will never plug in hard drives to the back of the monitor! I’m afraid to even try my Drobo as I thought that was a recommended config with it going to monitor, then monitor to Mac. No way am I risking my Drobo data! LG needs to fix this or document it in the manual.