A question about Mission Control on the Mac

I’ve been spending more time than usual on my Mac setting up a new Mini and using Monterey for the first time. I’ve been a bit spoiled by the large, easy to see, representations on iPad’s Multitasking. With Mission Control on the Mac the default presentation shows text along the top for the spaces rather than an actual visual presentation of the spaces which requires me to then do a secondary push of the cursor to the top to get the visual.

Surely there must be a way to show the visual thumbnails by default?!? I’ve looked 3 times in preferences but don’t see anything. This added bit of friction seems unnecessary.

Not exactly what you want, but if you set up a top left and/or top right hot corner as mission control, you’ll get everything with one movement.

Thanks! I’d forgotten that I’d set the top left as my Mission Control - better than nothing! I also remembered that there’s a shortcut on the keyboard but that doesn’t provide the thumbnails. Why would they change it from a default that shows the thumbnails (useful) to “Desktop X”??? That just seems silly. How is that even useful?

Probably just faster to use the Command-Tab switcher!

funny enough , I have never use mission control ever since I migrated from Windows to Mac 20 years ago. Initially, I used the dock bar, but now I do not even use that but use Raycast instead

I probably missed something that I do not even know exists

Same here.
I never use mission control or multiple desktops, or launchpad or rarely even Cmd-tab. Any launcher is faster for me. In the past that’s been launchbar, then Alfred, and now Raycast.

Wait, wait, wait!! So do you minimize to the dock? Or do you have all the windows just stacked on top of each other on your one desktop space?

Funny, I started using the Mac back with system 7.1 and was always very happy with the classic system 8 and 9 then came OS X and minimizing to the dock. That was fine too and a hybrid of overlapping windows and minimizing for me. When multiple desktops came I mostly adopted it though I’d often still have screens with a few stacked windows. But thinking back, I think I tended to have one or two apps per desktop and I kept them grouped by function… messaging/communication for example.

I think this might help explain why I adopted the iPad so fully especially as it evolved to the current mode of large visual tab multi-tasking. In that regard I use it the same way I used/use the Mac - with several spaces shared by 1 or 2 apps that I flip between. Currently have a Safari space with a couple of Safari windows, an RSS/Safari split between NetNewsWire and Safari, Mail and Notes, web coding/file server, with a split between Textastic and File Explorer. Pretty much how I used to use the Mac pre-iPad and also how I tend to use the iPad.

do you have all the windows just stacked on top of each other on your one desktop space?

Really don’t see the need in minimizing. What I need is ‘in front’, and everything else is ‘under’ it. I switch to different apps using Raycast. So tap CapsLock, then a couple of letters and whatever I need is in front. I sometimes use Raycast’s shortcuts to put things on halves or 2/3rds of the screen.
I also have three screens (including the iMac Pro), so that may be a factor too. 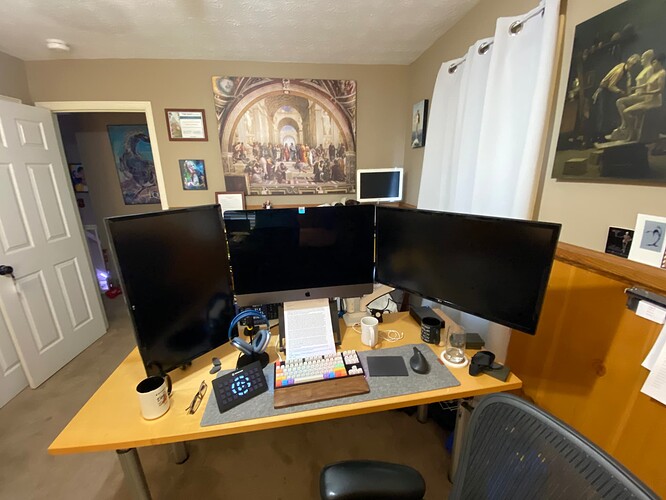 Ha! Well, back in the day I used Quicksilver and Launchbar, bouncing back and forth. But ultimately just settled down on Spotlight. Seeing your mention of Raycast and reading that it can manage windows I downloaded it and whew, this is really helpful - thanks for mentioning it. Very nice to be able to control window size and placement with just a few keystrokes and no set-up required.

Search menu items replaces Paletro and the like too.
Lots of good stuff in Raycast.

Doing this with BTT and the HyperKey.