By the way, what iPad stand is that that you are using? That looks like something that I would enjoy using. Holds iPad or iPhone in infinite positions, heights and angles Includes both a weighted desktop stand + shelf clamp Lifts iPad to eye-level for FaceTime and video conference calls Use at a desk, in the kitchen or shop for hands-free iPad...

Definitely found this to be true. As a heavy user of both, I feel that SideCar has been getting less and less reliable. I’m now getting these sorts of weird images when moving a window from Mac to SideCar iPad. Looks perfectly normal when I move it back. This has been happening fairly consistently. 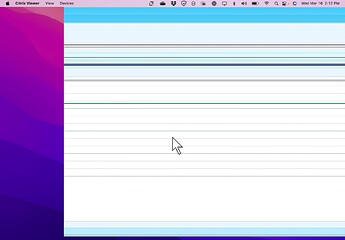 did Apple decide that a 2017 iPad wasn’t enough powerful for uppercase letters?)

Oh, memory lane! Iirc, the first Apple ][+ I used had the optional ($) extra card to enable lowercase letters on screen! It was such a luxury at the time…

Since I added a second monitor, I lost the ability to use my little vga display as a dashboard.
I thought UC would solve that, but macOS won’t let me position my iPad below my iMac Pro is Displays. Also, the scroll wheel doesn’t work, and I wind up having to reach for the iPad for that and other things. So, too much friction for me. Glad you all are getting some use out of it.

Bummer about not being able to use the little display. I did the same based on your suggestion and find it quite useful. Thanks again for the idea. And my wife derives constant amusement from my multi-monitor setup (at six counting the two iPads, seven if you count the iPhone on its stand!).

And very strange about positioning the iPad for Universal Control. I can position it under three of the four displays. If I try to put it under the main display the system moves it to under the left most display. A design decision by Apple? A bug?

I use a Magic Trackpad with my Mac, so the scrolling issue is not one I have. I do have a MX Master 3 that I use with my work laptop, and I confirmed that the scroll wheel, and other controls, do not work on the iPad.

@Bmosbacker - I work similarly to you in this respect - using my iPad as either an independent second screen or I use Sidecar. Yet, I’ve found that there is an efficiency I gain using one keyboard and one trackpad to control both devices. I guess the new helpful twist is that UC let’s you use the iPad as an iPad (rather than as a Sidecar second display). I have work e-mail on my iPad that I do not have permission to have on my Mac. So, using Universal Control right now, I can attend to my emails on iPad, drag and drop files from my iPad email to my Mac desktop, and then type this post. Instead of having to lift my hands off the MacBook keyboard to use my Magic Keyboard of touch the iPad screen, I’m doing all of this from my Mac. It’s pretty cool. It also saved me a step of using the share sheet to save my file to the desktop.

The question is whether these seemingly minor usability improvements scale up to be a big deal for me or just a nice feature to have in the back-pocket to use from time-to-time. Seems more like the former, though, because there is zero friction to use it, which is hard to ignore. Obviously, from this thread it is clear that many people are finding it a big deal.

That is a great response, thanks! I’m going to start using it more to see what I think, thanks again!

I think the best use-case I’ve heard of, and experienced myself, is to use secondary apps (like communication/email/slack/discord) or music/YouTube on the iPad. My 2016 MBP is still going strong but it beings to suffer when I am working in VSCode+Obsidian+Pixelmator Pro running if I am also playing a YouTube video on the side (music or news). Sidecar, instead of helping, actually added to the performance issue since now it required extra bandwidth as well to process another screen and I always ended up using the iPad separately, so that I can utilise it’s own power instead of the MBP’s. And UC allows exactly that without leaving my Mac’s Keyboard. So basically, it’s separation of power usage both CPU & battery along with offering ergonomics as mentioned above since one can now place the iPad farther away. Add to the fact that many apps might be available on the iPad but not for the Mac(or don’t work as well), especially for us who still use Intel Macs is an added benefit too.

nd UC allows exactly that without leaving my Mac’s Keyboard. So basically, it’s separation of power usage both CPU & battery along with offering ergonomics as mentioned above since one can now place the iPad farther away. Add to the fact that many apps might be available on the iPad but not for the Mac(or don’t work as well), especially for us who still use Intel Macs is an added benefit too.

That is extremely helpful–thank you!

Ok, now I see the value. I can traverse three screens from my keyboard with Universal Control–very nice. 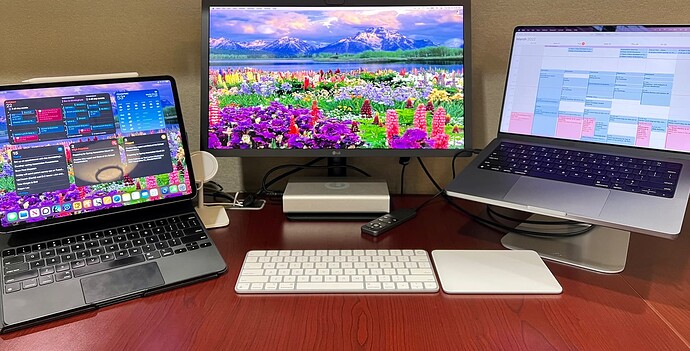 Color matching was unintentional but I change my wallpaper to match the season.

OT: Where is the place in the image? And did you take the picture?

No, but I wish! I found it where one finds all things, on the internet.

I have a MBP13 on my home office desk that is always connected to an external monitor on HDMI 1 in clamshell with an external keyboard and trackpad. I also have a docking station attached to HDMI 2 on the same monitor, which I connect my MBP14 (main laptop) to when I am at my desk, with the monitor display positioned above the MBP14 display in display settings just like it is physically.

This setup is nice because I can switch between the two MBP by changing the input on the monitor without needing an HDMI switch.

But now with UC and the MBP13 display positioned above the other two displays is display settings, when I am on HDMI 1 I can control both Macs with the built-in MBP14 keyboard and trackpad by pushing up from the MBP14 to the monitor. When I am on HDMI 2, I get the MBP14 with the monitor as a second display. 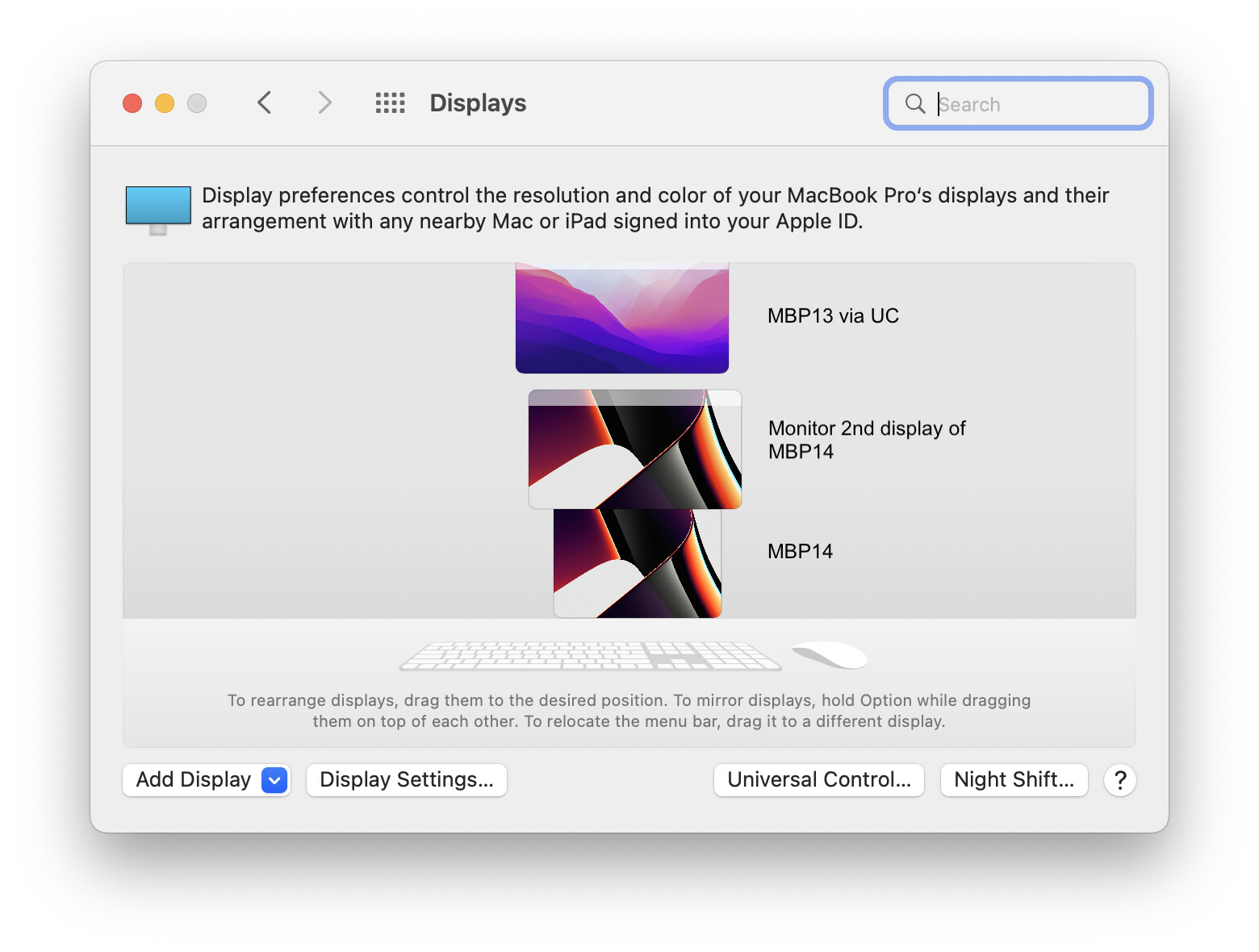 So far this is working great and saves me from having to use the external keyboard and trackpad.

I’ve played with UC on the iPad and Mac, but the Mac-to-Mac control is

I’ve been getting good use out of Mac to Mac Universal Control while setting up my new Mac Studio. So useful to have my MacBook Pro running alongside the new machine so I can can take a look at how I have it set up and duplicate it.

But now with UC and the MBP13 display positioned above the other two displays is display settings,

Is your system remembering that setup across sleep and/or power cycles?

I set up a similar arrangement; stacked displays. However, the next day it had completely forgotten the arrangement and I had to set it back up. The third day I couldn’t get it to work at all (moving the mouse past the edge of the screen in any direction did nothing). I checked all my settings and they were correct (all three boxes were checked in the UC window). And yes, all devices were on the same network every time. All I did was put my devices to sleep over night (closed the lids on my MBA and iPad).

I had that second MBP in another spot on the house connected to ethernet while I’ve been trying to work out a backup strategy for my Synology. I finally got what I think is a working setup, so I just moved it back to the desk couple days ago and have it set to never sleep for the time being while I test everything out. Then I have to figure out if/when to let it sleep because I still want to be able to access it remotely, run the automated backups, and be able to wake it without having to open the lid. Sorry that’s all off-topic and not helpful