Ads Blocker - Which service you prefer

I started a similar post for VPN services, I believe it has a lot of good insights from the community. So this is a similar post but for Ad Blocking.

What is your favourite Ad Blocking service/software? And which devices you are using?

I’m lovin’ pi-hole so far. It does take some work to get it going, though.

I use 1Blocker/1Blocker X for Safari on both iOS and macOS. For Firefox on macOS, I like uBlock Origin (not simply uBlock) or uMatrix they can be painful until you get the sites you want through whitelisted.

Ghostery (Lite) on the Mac is now on the app store, complying with the new security rules for Safari Extensions, so that’s what I’m using right now.
On iOS I use 1Blocker.

I use 1Blocker X on iOS and uBlock Origin on Mac and Windows.

I’m using AdGuard across my platforms.

On Chrome (and Chromium-based browsers, like Firefox) I use the two companion extensions Nano AdBlocker and Nano Defender. They are a fork of uBlock Origin, which is generally seen as the best ad blocker for Chrome, and they are open source and can utilize any of the dozens of updated blocklists for uBlock Origin. Currently, Nano Adblocker is uBlock Origin + a few more tricks to better integrate with Nano Defender. Nano Adblocker also has more up to date lists (anti-mining), faster update cycle, and is configured for privacy out of the box.

On Safari I mainly use 1Blocker, though I recently bought and am test-driving the well-reviewed Better Privacy for iOS and Mac when they had (and still are having) a 99¢ sale on Apple’s App Stores. So far I like them both, although 1Blocker outmatches other blockers in its configurability.

They state: “We protect you from behavioural ads”. So not “all” ads?

What’s your experience so far?

They state: “We protect you from behavioural ads”. So not “all” ads?
What’s your experience so far?

They seem to catch as many ads as 1Blocker, as far as I can tell. There’s one type of ad that’s embedded in my email that nothing gets rid of, on any platform - these LiveIntent/AdChoices ads:

But otherwise I’m pretty blissfully ad-free. That said, Chrome is my main browser, so most of the time my browsing is being swept by NanoBlocker/NanoDefender.

I have to add a mea culpa, because last year I bought a lifetime license for AdGuard and that’s always running on the Mac (including sweeping ads inside apps, apparently) as a menubar utility on the Mac, not on any specific browser. I found that I was getting the occasional weirdness with browsers that had their own ad-blockers installed, so I turn off AdGuard’s ad-blocking, and rely on it for tracker-blocking. Still, it claims to be blocking ads anyway… and I’m not sure which app or plugin is doing precisely what. (But my browsing is clean!) 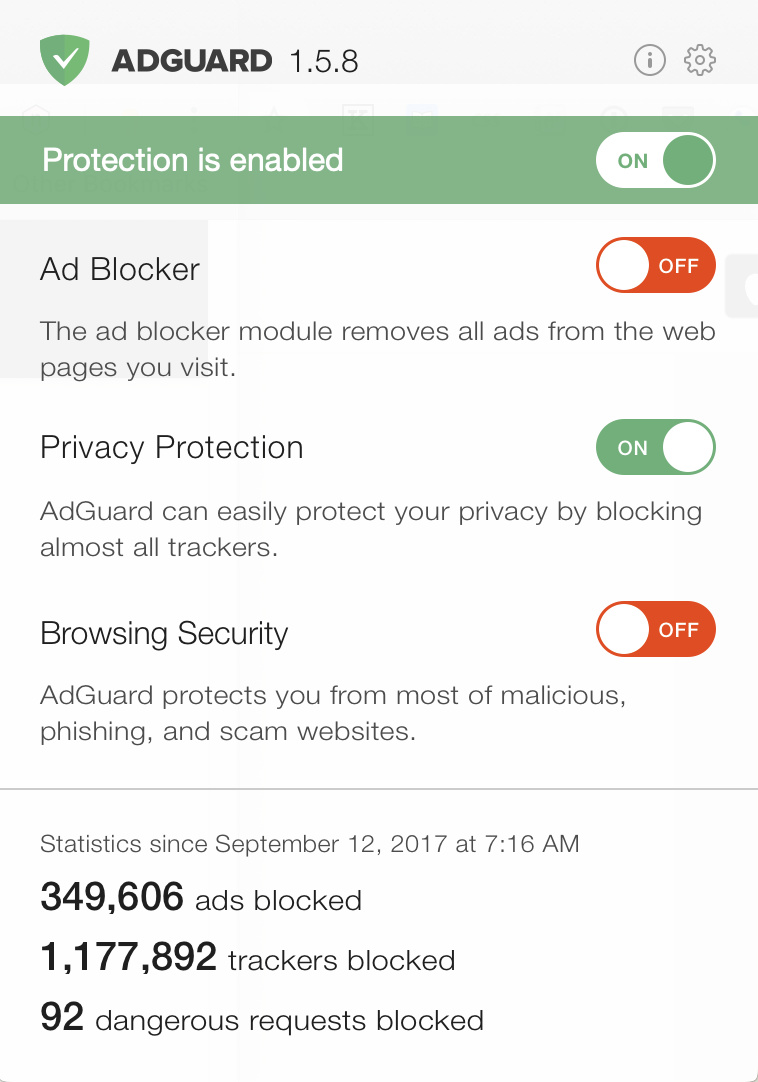 I also have an AdGuard lifetime license, but find the App rather intrusive (replacing SSL certificates by its own).

Maybe I should give Better a try…

How is pi-hole? I’m interested in trying it and have a raspberry pi just sitting around but not sure if it breaks a lot of the internet like some other ad blockers do and if so how hard is it to whitelist a site that is really good at blocking ad blockers.

If you have a r-pi laying around and you have some experience with Linux I’d encourage you to try it. It’s not very hard to get going and it’s easy to undo if you decide you don’t like it or if you need to disable it temporarily. You can set it up for specific device(s) on your network or every device on your network. I haven’t tried whitelisting yet but it looks pretty easy.

I understand there are difficulties using pi-hole if you can’t change your name server on your router (e.g. the Comcast gateway modem/router) but that too can be worked around.

I run 1Blocker on IOS, but have never found a blocker that didn’t cause problems on some web sites.

Lately, I’ve been running Safari with Reader set as the default. Works well on many websites. If I find a site that Reader can’t handle, I send the page to Instapaper and move on.

For sites, that aren’t totally obnoxious, with full page takeovers, etc., I make a point of checking out their page unfiltered before I leave. I believe in paying for content/media.

DRM is another story

I use the 1Blocker Legacy on both iPhone & iPad Pro (haven’t found the need for upgrading to the new X version yet).

Only thing I ever experience is that on some sites the Comment section is blocked even when added to Whitelist, and the Twitter share plug-in gets blocked occasionally.
But doesn’t qualify for me to upgrade, I think

Probably comments are blocked because they are hosted by third party (Facebook or Disqus).

But I don’t mind as long as I only go through comments on sites I trust, so temporarily disabling blocking is fine

The X version makes it easier to enable comments, but at the moment I’ll manage🙂

On iOS Safari I use the blocker of the Firefox Focus app. it’s extremely efficient.
I tested Better but it’s not enough for my use.

On one of the Macs I use Adguard (lifetime license) but on my beloved MBA 11" I don’t use any blocking app, I use NordVPN with the Adguard DNS.
The DNS block almost everything except Youtube popup ads.
https://adguard.com/en/adguard-dns/overview.html

Thanks for the suggestion of AdGuard. I had always stayed away because it seemed like a service that sold your data, but after reading their Privacy Policy it seems they are just making money off the subscriptions and purchases.

In case anyone is looking into buying it, there is a StackSocial deal for two computers for $29.99. I just purchased it and seems like it’s blocking the same if not more ads/popups than 1Blocker, plus it isn’t breaking the functionality of JavaScrip bookmarklets as the 1Blocker Button extension did.

AdGuard is pretty great, BUT…

They’re Russian developers, with all that that entails wrt posibly being made to surreptitiously provide user-related data (a la Kaspersky).

FYI, StackSocial regularly has this lifetime deal (I myself took advantage of it through them) but if you (1) have a VPN for Russia or Eastern Europe and (2) read/write Russian and/or have a good web translator the pricing in and around Russia is something like $6 for the app from the developer’s own site. (Prices change depending on where the website thinks you’re located.) Some English-speaking Redditors were able to successfully take advantage of that lower price, but for some reason - due either to my VPN (which only went to Poland) or my credit card, I was refused purchase at that lower price, so I bought from StackSocial.