Yes, I hate it, too, when the next “… gate” comes out of the woodwork and into the open. Very often, those stories are overblown. Well, …

I have been experiencing a rattling noise with my left AirPod Pro, especially when dealing with low frequencies or even when I am speaking while having the AirPods in my ears. I started to notice it about 6 months after having made the purchase. First, I thought it was a defective tip. Apple exchanged the tip. It did not help. Now they will exchange the left AirPod Pro.

Yesterday, I stumbled into this:
https://mjtsai.com/blog/2020/07/06/airpods-pro-rattlegate/

He is referring to 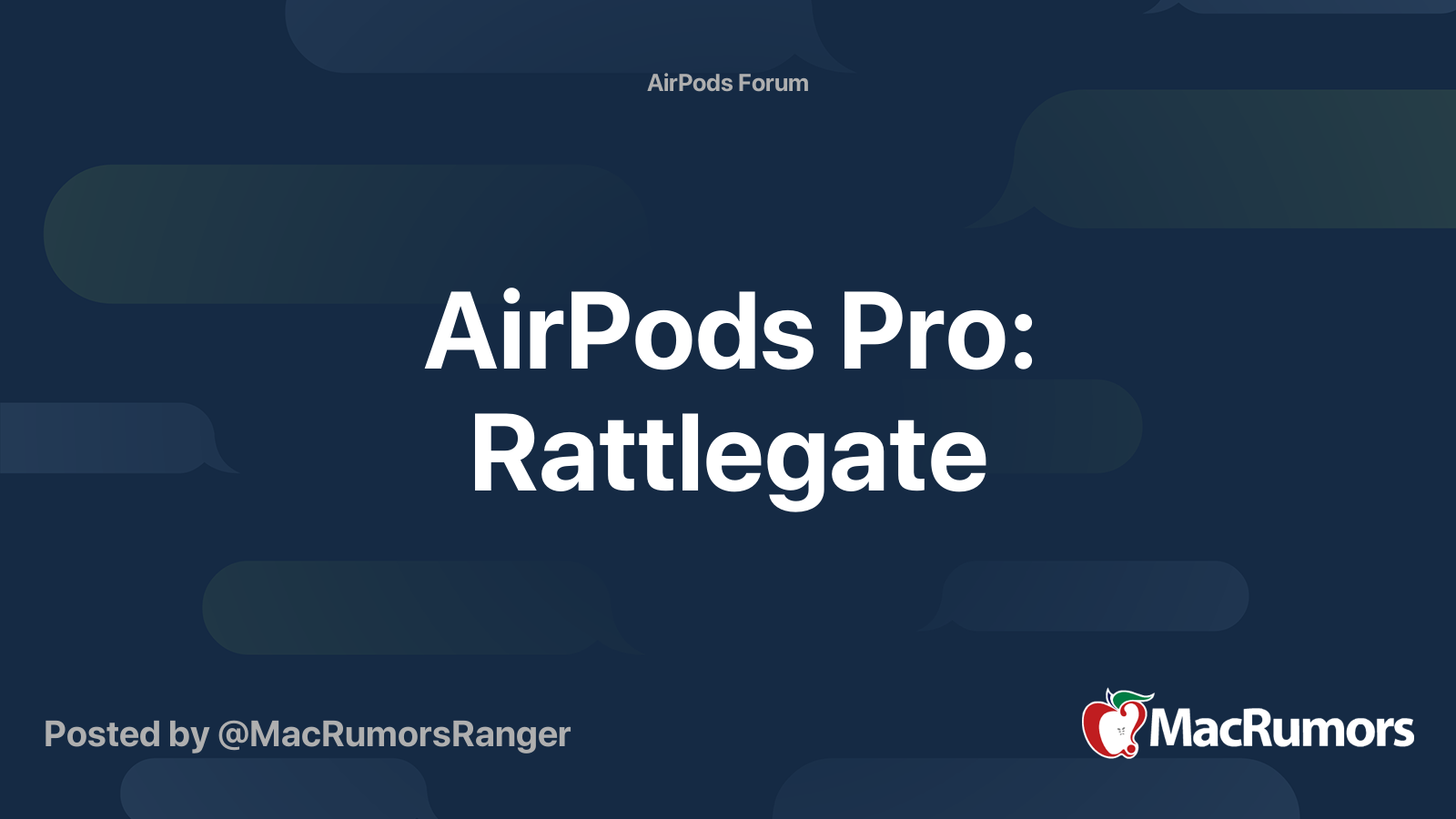 So there appears to be a widespread issue with the AirPods Pro: they seem to eventually develop a rattling noise when Noise Cancellation or Transparency is in use. It is believed to be a hardware problem at this stage and fairly...

Quite an active topic…

If you are experiencing similar problems, you should contact Apple. I do not know if this is something of a “… gate” dimension, but there seems to be something to it.

I had this issue and after the usual back and forth over the tech support chat service Apple agreed to replace my left AirPod Pro. Swapped in about 10 minutes at the store and no questions asked.

Using a tone generator app I was able to clearly hear clicking from around 80Hz and down.

Yes, I hate it, too, when the next “… gate” comes out of the woodwork and into the open. Very often, those stories are overblown.

FYI you can thank former Nixon speechwriter William Safire for that. After the Watergate scandal of the 1970s Safire, a NYTimes columnist, started adding -gate to describe scandals and non-scandals in his columns, which took off. New York Magazine said at the time his aim in pushing -gate to any minor scandal involved “rehabilitating Nixon by relentlessly tarring his successors with the same rhetorical brush – diminished guilt by association”. Safire himself later said to author Eric Alterman that he “may have been seeking to minimize the relative importance of the crimes committed by his former boss”

And almost five decades later that’s led to everything someone doesn’t like about an Apple product being given that suffix.

I have had this with three pairs. Apple is good at replacing them.

Apple replaced my left APP for this issue a couple weeks ago. I used the option where they put a hold on your card and swap units through the mail.

I had this a couple of months ago, but it seemed to go away. Only occurred in noise cancellation modes.
Sadly the problem has come back again during the past fortnight.
Do we think it is a hardware or software fault?

Do we think it is a hardware or software fault?

I just received the replacement. No rattling any more. The software has not changed. The device has. So, at least for me it has been a hardware fault.

The noise sounds like something that has a crack inside or is loose. Low frequencies seem to make it rattle/move/vibrate/swing. I have no idea if this is the case, but that is how it sounds to me.

I’ve just gone through support (first ever time) and they are going to swap out the faulty left one for me. They ran through the cleaning of the tip and the speaker grille first, but it didn’t solve the issue.

This issue seems have smthg to do with the tips. I took them off and the “rattling” stopped. Put them back on and it came back.
Somehow the noise cancelling amplifies the vibration sound in between the tip and the earphone, I guess. A minimal bad fit leads to rattling, then. Especially noticeable while talking.

Sadly that means there is no good way to solve it guess since the holders of the tips wear out.

That is an interesting theory.

I never changed the tip after buying the AirPods Pro (not even for cleaning the AirPods). That would mean that the holders wore out just by having the tips attached to them. That is not reassuring. Well, time will tell if I will encounter this issue again…

EDIT:
I deleted a passage containing “defective by design”. That was not what I intended to say. More on that:

Cleaned the lock cut outs in the tips and the earphones and it seems to diminish the rattling. Will keep an ear on it and update if I come up with something.

That is an interesting theory. “Defective by design”?

“Defective by design” would mean that Apple designed them to go bad - and I find that very hard to believe. That’s an entirely different thing from “the design is defective”.

Sorry, that was absolutely not what I intended to say.

Thank you very much for making that clear.

It was just my apparent lack of knowledge of the English language being a non-native English speaker. Sorry again!

It was just my apparent lack of knowledge of the English language being a non-native English speaker.

It happens. English doesn’t exactly make it easy on non-native speakers, either.

There’s a trend I’m seeing in certain groups of people I’m in (not necessarily this one) talking about “planned obsolescence” every time a product has an issue with it - and so I get a little nitpicky about terminology because I see it so often.

“Planned obsolescence”, of course, is similar to “defective by design” - it’s the idea that a product has some manner of critical flaw that makes it expire or become non-useful earlier than one would otherwise expect, in order to drive revenue for manufacturers.

Some people accuse Apple of planned obsolescence with things like iPhone batteries and such. I usually ask them when the last time was they could update software to current on their 5-year-old Android phone.

To the point of your original post and linked article, FWIW, I also hate the “-gate” suffix for things. To me to be a something-“gate” there has to be gross negligence of some sort, a cover-up, or something along those lines.

If Apple is doing in-warranty swap-outs for defective units, it doesn’t feel like a “-gate” to me. If it gets to the point where they’re still selling units with no updates / changes and denying that there’s even a problem, then we’re probably at a “-gate”.

I’ve had to replace two of them. First one was early on and I ended up paying $29 to get it replaced. The most recent one was in March, peak of COVID, they replaced it for free.

Having got my replacement left AirPod yesterday I have now noticed my right one has a very slight rattle. It’s nowhere near as bad as the what the left one was. Looks like another call to Support.

Will hand in both tomorrow rven though only one rattles, saves me one trip to the store. I think this is a widespread problem.

Aaaaand its now started in my right airpod, just this morning.

Got my new ones last week. Let’s see how long they last:)

You probably already will have noticed it:

My right one is starting to develop the same issues like my replaced left one has had. But I am not in the mood for visiting a Apple Certified Service Provider these days…