Based on this thread below - it go me thinking to ask what are the best OCR apps for Mac these days?

PDF Expert, What Happens if I Update? Software

The App Store is showing an update for PDF Expert on my iPad. If I update, do I end up being forced into a subscription to keep using the app and its current features? I absolutely will not pay a subscription for a PDF app. [Screenshot 2022-07-04 at 3.06.43 PM]

Use Live Text with the iPhone camera

Copy text, open websites, make phone calls, and more from text that appears within the camera frame on your iPhone.

It depends on what I’m OCRing. For simple things I use CleanShot. Does a great job.

For existing PDFs, I use the free CLI ocrmypdf with a Keyboard Maestro macro using the selected file(s) in Finder.

I use https://pdf.abbyy.com as the “build in” engine within Devonthink and (as far as I remember) ScanSnap

Prizmo and Nitro PDF Pro do the trick for me, both are also in Setapp. Other than that Devonthink has a decent OCR functionality. Between these 3 apps I have cracked some difficult OCR problems.

Live Text in Apple Photos is totally neat, and basically the only form of OCR I ever use. Also, the OCR used by Google Translate when uploading an image, very useful for signs or menus in a language you don’t fully (or at all) master.

It has been years since I needed to lift text from a printed page, most everything in my workflow is already digital and easy enough to copy/paste.

Keep in mind that most applications, with the exception of ABBYY, use the Tesseract engine. There is no way an indy developer creates an OCR engine all by himself.

ScanSnap uses ABBYY.
ocrmypdf is basically a shell around Tesseract (and a useful one!)

There really isn’t that much to choose. Even though devs try to make you believe differently.

ocrmypdf is basically a shell around Tesseract (and a useful one!)

For anyone interested, here’s a look at a few relevant actions from my Keyboard Maestro macro that uses ocrmypdf: 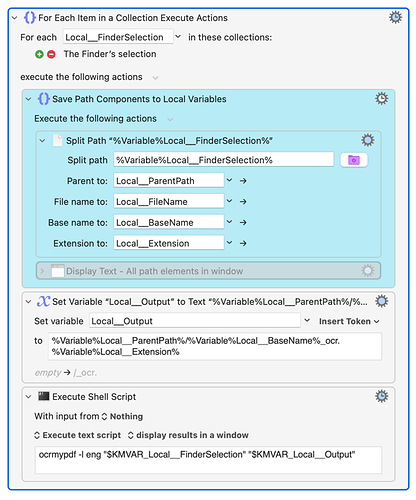 Thanks for all the great responses everybody!

ABBYY Finereader (Best OCR software for Mac®| FineReader PDF for Mac®), the stand-alone app that seems built around the same engine that DevonTHINK also uses (which I also often use in simpler scenarios). But Finereader offers more functionality and settings for outputs (especially the separating of page spreads to single pages), which may help you. I’d recommend it fully. When I bought it, it was a one-off license fee, but from the website it seems you now pay an annual cost, so it ain’t cheap!

ABBYY’s engine is still the best. By far.

Their Mac application is horrendous though. As is their support. Which is basically non-existent.

I’m using Owlocr. It works most of the time, one time purchase.

I’d recommend it fully. When I bought it, it was a one-off license fee, but from the website it seems you now pay an annual cost

I have a few Fujitsu ScanSnap scanners installed at my office and home. It comes with ABBYY as the OCR engine. Works great!

Please check out my fine art and travel photography at www.budjames.photography.

Please check out my fine art and travel photography at www.budjames.photography.

The new PDF Expert for Mac seems to use Apple’s Live Text/Vision API (or whatever it’s called). It’s incredibly fast (on Apple Silicon at least), uses multiple CPU cores (unlike DEVONthink, ABBYY, and others), and seems very accurate. I just OCR’d a 1000-page scan and my jaw hit the floor.

Thanks for this tip — I just installed it, and it looks like it’ll work well.

I ditched Scansnap years ago. I use Readles scanner pro which stores in the iCloud folder. The I set up Hazel to transfer to Devonthink.

I use Readdle’s Scanner Pro which stores in the iCloud folder. Then I set up Hazel to transfer to Devonthink.

Since macOS Mojave, in the EagleFiler app I’ve been able to select “Import from iPhone” and then point and click with my iPhone to scan a document directly into EagleFiler.

I assume other apps can do this, too. Continuity Camera was a macOS feature not particular to any app.