The 7.9-inch iPad mini now supports the Pencil 1 as well, and both use the A12 Bionic. The 9.7-inch iPad is still for sale, with no update today.

I was up early and was able to get a post up.

What does everyone think?

That (the timing, on a Monday morning without fanfare) was unexpected! Well done Apple!

Figures that they do this the day after MPU releases the iPad episode.

So, the new 10.5” iPad seems to be a hybrid of the 10.5” Pro and the most recent 9.7” iPad. It takes the screen size and Smart Keyboard support from the Pro, but drops a lot of the other features that distinguished the old Pro from the vanilla iPad (Pro Motion, quad speakers). It also helps close the big price gap between the consumer iPad and the iPad Pro.

The new mini is interesting. While it was rumored for a while, Pencil support is unexpected. It would make a very interesting notetaking device. I just wish it was compatible with the Apple Pencil 2 rather than the old Pencil.

It takes the screen size and Smart Keyboard support from the Pro, but drops a lot of the other features that distinguished the old Pro from the vanilla iPad (Pro Motion, quad speakers). It also helps close the big price gap between the consumer iPad and the iPad Pro.

I’d argue the features they kept are the ones most consumer actually care about most. I’m willing to trade them to hit that $499. You’re right about keeping it away from the Pro, as well. I think this is probably the new “default” iPad.

I’ve been using my old iPad Mini 2 as an ebook reader lately. It works nicely for that. However, now that I’ve upgraded to the 2018 iPad 6, I find the screen on the Mini 2 to be cramped for web browsing or social media.

That said, if either of the two models supported the Pencil 2, I’d be tempted. But they don’t so I can save the money I would have given to Apple and give it to plumbers instead. (Burst pipe in the kitchen.)

I wonder if part of the timing on this announcement is to “clear the decks” ahead of next week’s event. Probably much less chance of seeing any hardware now.

I wonder if part of the timing on this announcement is to “clear the decks” ahead of next week’s event. Probably much less chance of seeing any hardware now.

I completely assume it is for that reason. None of these announcements were exciting enough (to the general population) to host an event, and they probably want 100% of the focus to be on the streaming stuff rather than new hardware. By the time the event happens this update will have all fallen out of the news cycle.

I think this is probably the new “default” iPad.

I would guess the default will still be the cheapest one. I imagine for most people purchasing an iPad they’re not planning to do much with it other than watch some netflix or check email, and saving some money works well with that.

I agree that the 9.7 will still sell the most units.

To me, though, “default” isn’t what sells the most, but the starting point for decision making. When someone asks “Which iPad should I buy?” I think it may make the most sense to start the discussion with the new 10.5" iPad. If you don’t need a the bigger screen, smart keyboard, and A12, get the 9.7. If you want a bigger, better screen, FaceID, or will use the pencil a lot, get the iPad Pro.

I’ve been waiting for this for a while: my mum has trouble holding a full size iPad for half an hour or so, and still uses an old Mini. I’ve wanted her to have an upgrade path for ages (the Mini 4 was way overpriced for the purpose).

For the bigger iPad, I still think the 9.7 should be the default. If you need a keyboard consistently look at the 10.5; if you need “pro” level, look at the Pro.
The 9.7 is a fantastic machine and for most people’s use cases, I reckon still more than adequate. The new one provides a tempting up-sale though, since it’s not 3x the price!

This line up really signals to me that Apple is serious about iPads as the future of computing (still a Mac user for the foreseeable future myself, though).

I just wish it was compatible with the Apple Pencil 2 rather than the old Pencil.

Same here. I anticipated Apple would try to migrate all future iPad purchasers over to Pencil 2. I assume there is a block of possible updaters/upgraders who are already Pencil 1 owners, so not having to buy the new Pencil is a plus and an incentive for them to buy, probably.

Interesting product matrix – lots of target niches in the market, it appears.

The new mini is interesting. While it was rumored for a while, Pencil support is unexpected.

It seems essentially to be a revamped 1st-gen iPad Pro, yes?

It seems essentially to be a revamped 1st-gen iPad Pro, yes?

Yes it seems to basically be the second gen iPad Pro 10.5 with upgraded A12 chip and Crayon support, minus the proMotion tech, and swapping in a cheaper 8MP camera (vs 12 MP).

With the current iPad still periodically on sale for $249 (Amazon and Target, at least as of last week), I don’t see the mini gaining much traction except for those who want to pay the extra price for a smaller device. And that’s a niche.

They may also have a million Pencil 1’s to get rid of.

They’re have to make some clear delineations between iPad and Pro to underscore the pricing differences, especially as iPads move up in specs. Right now the new Air has a fully laminated display, a processor that is 2 years newer than the base iPad, has a better front camera than the base iPad, has a smart connector for keyboard support and the base storage is 64Gb vs 32Gb. They had to remove some features in the Pros to support the price differential, and things like no 4-speakers and no Pencil_2 are part of that.

Apple wants to sell Pencil peripherals (and support Crayon sales - especially as it’s rumored to have been created in partnership with Logitech), but they don’t need to offer the 2nd-gen Pencil except as an inducement to look up the price ladder.

And that price ladder is pretty clear now, and fills in gaps when Apple raised the price of the iPad Pro last fall. Right now we have

Right now, even with Pencil_1, the new iPads are compelling, competitive devices compared to equivalent Android tablets. The Galaxy Tab S5e is $399 and has no stylus support (but it has a decent processor). The Galaxy Tab S4 is a whopping $649. It includes a stylus but ships with a now two-year-old Snapdragon 835. The Air at $499 is a convincing entrant.

I think the timing is pretty interesting. By coming out with iPads a week before the March 25th event Apple is saying not to expect hardware announcements next week. It will probably be All Services.

Don’t forget what I think is by far the best feature of the 2018 iPad Pro: FaceID.

I’ve got an iPad mini 4 that I use around the house occasionally and the one thing that really makes it seem old to me isn’t the old processor or the lack of Pencil support. It’s the lack of FaceID.

There is a Newbery winning book called Door In The Wall by Marguerite de Angeli, 1949. It focuses on dealing with change by seeking doors to go through… ways to address challenges, new circumstances.

I don’t look at the new iPads as how they are used now. I’d point a friend to the new one. They can grow in the bigger box. … my default.

Obviously, They’d make the choice for more or less options. 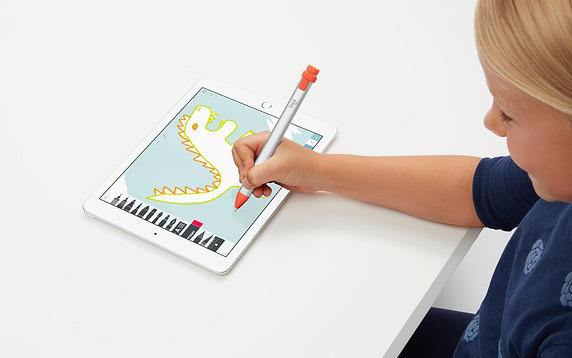 2019 iPad Air and mini models do support the Crayon, Logitech's cheaper alternative to the Apple Pencil, according to Apple.

Love the size, sad that is not with FaceTime and iPadPro style but still good update and for what I use it that is to consume media that would be awesome. Not sure if it will have a smart keyboard… if not then I may hold with the one I have…

Marco was right about something in a tweet earlier today: this is the Apple I miss. One that made frequent spec upgrades, even if they weren’t the type of upgrades that blew your hair back. This is a satisfying upgrade that adds functionality to my favorite iPad size, the Mini.

This is how Apple seduces me. Every. Single. Time.

I love my original 12.9 Pro, it’s my go-to device for reading and writing at lab and at home. But I have been PINING for an iPad Mini with Pencil support as a possible replacement because of portability; my Mini 4 fit snugly in a lab coat pocket, I just wanted the added convenience that Apple Pencil support would provide for jotting down notes and easier highlighting while reading.