It’s been six months since we asked before and since Dropbox & Evernote have finally released Apple Silicon native apps, I thought I’d ask others to take a look.

I’m setting up a “new” MacBook Air and realized that Typinator is still Intel, although they promise the next version will be native.

EDIT: By entries I mean processes.

According to the free Silicon app from iMazing, I currently have 13 Intel-only apps on my primary Mac. 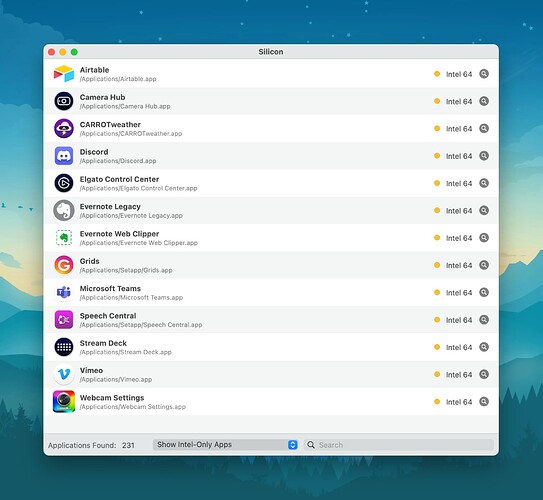 There are a few of these that I no longer use that I’ll likely remove soon. 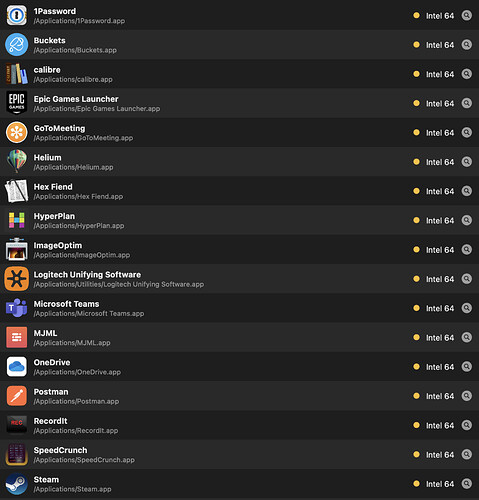 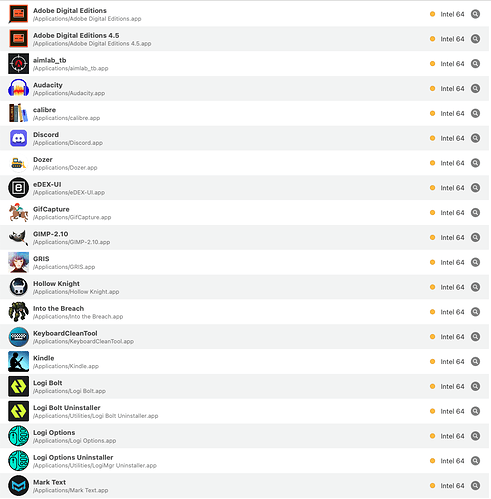 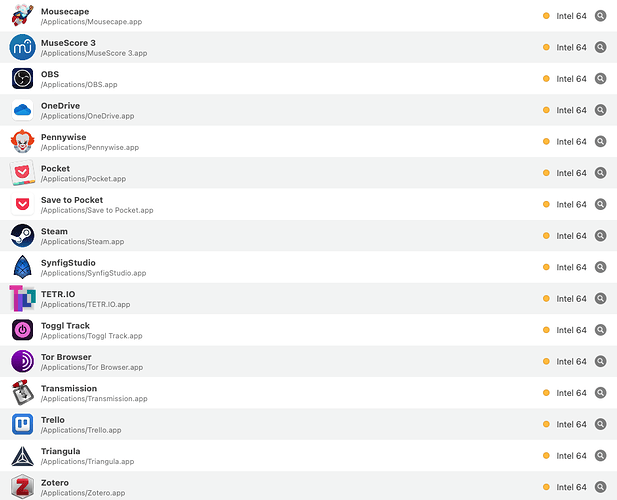 Quite a few, although I wouldn’t have noticed the difference. Personally I don’t think it really matters.

That’s a good point, and entirely fair. Rosetta² really is amazing. I can’t honestly even say that I notice the difference in running something as resource intensive as Dropbox.

For all the things Apple gets wrong, they really nailed this so much that it has become nearly unnoticed.

More than I was expecting as well. There’a a number of them that if we get the Rosetta 2 phased out before they’re converted, it’ll see my workflows seriously effected - specifically Onedrive and Teams at the minute, though I hear the Teams web client isn’t as bad as it was.

Bold apps are apps that would force me to have to look for another. Rubitrack v6 is Silicon supported, but I don’t want to pay the subscription fee, whilst v5 seems to work perfectly.

Mostly the apps from my Fujitsu-scanner. 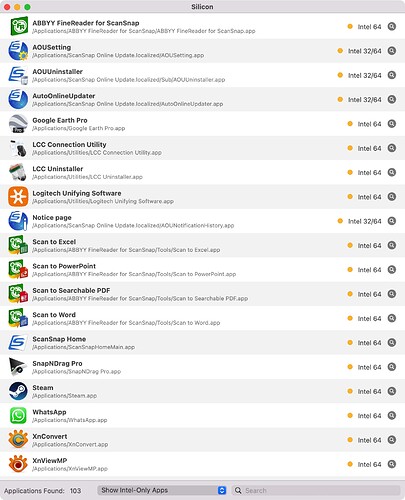 Quite a few, although I wouldn’t have noticed the difference. Personally I don’t think it really matters.

This is totally where I stand too. Rosetta 2 is really impressive.

For me, it’s LastPass and Private Internet Access VPN

Thanks for this! Made me realise there was a Silicon version of Brave Browser that I had to download (and Chrome I guess too).

Wait, what? MS Teams?? Seriously? So no Mac M1/Apple Silicon owners are running Teams on their set-ups at all – or is the web/browser version passable?

[Apologies if this is a silly observation – been out of the loop for a while!]

I use MS teams on my M1 mac and it runs fine. I didn’t even know that it wasn’t M1 optimised.

Teams is slow no matter where I use it so there is no difference imo. I use the desktop app for easy launching with Raycast though.

It’s weird, I have a 14’ MacBook Pro and Teams types kinda sluggish. I actively dislike using it, but we are a MS user company, so I have to have it.

Not just you mate. 13" M1 MBP here. Same problem with the mobile app on my SE2 and 2019 iPad Pro 11". Teams is an example of one of those electron apps that could be super good but just isn’t. But alas, I am also required to use it…

Two of us mentioned Teams. :). Edit: three of us before you posted!

I have the beta version of OneDrive that is a universal binary (so native, not intel). I’d forgotten it wasn’t the released version (long may that remain the case).