Not even remotely tech-related, but I know we have a pretty good-sized stack of Star Wars fans on these forums.

Anybody read the novels, and have suggestions for the best ones? I’m already reading Thrawn, and I’ve read the previous Thrawn trilogy - but looking for my next read.

I liked this one

Darth Bane - the rule of two

In line with the Thrawn books, I’d recommend any of the Timothy Zahn books. I’m currently enjoying the Aftermath Trilogy.

Any of the books from the Disney era are pretty bad - they are super bland and don’t really establish much or bring anything new to the table. My guess is the authors are not allowed to establish stuff because Disney wanted significant events to be saved for the big screen.

Out of the old books, people LOVE Timothy Zahn, but I’ve always found him a bit boring.

Would highly recommend the Rogue Squadron books - they are quite solid.

I also love the Jedi Academy Trilogy and Courtship of Princess Leia, but it’s my understanding most people don’t like these. I read them as a kid, though.

stick to The Legends books.

Revan, Darth Bane books are great.
Jedi Academy by Kevin J Anderson is great.
Legacy of the Force series is fantastic (and my favorite)
Fate of the Jedi is also good.

most of the new books are horrible especially anything written by Wendig, who imo is mentally ill.

stick to The Legends books.

Am I understanding correctly that “Legends” basically means “anything before Disney bought them”?

correct. there is a certain high quality that comes along with giving authors freedom. there was a framework that all of the books worked within but they could tell the story they wanted and multiple authors would collaborate in the series like Legacy of the Force and Fate of the Jedi which tell the story of the solo kids and skywalkers kid. be sure to read the heir to the empire trilogy if you have not already as it lays the foundation.

But as for the movies… Yoda has this to say… 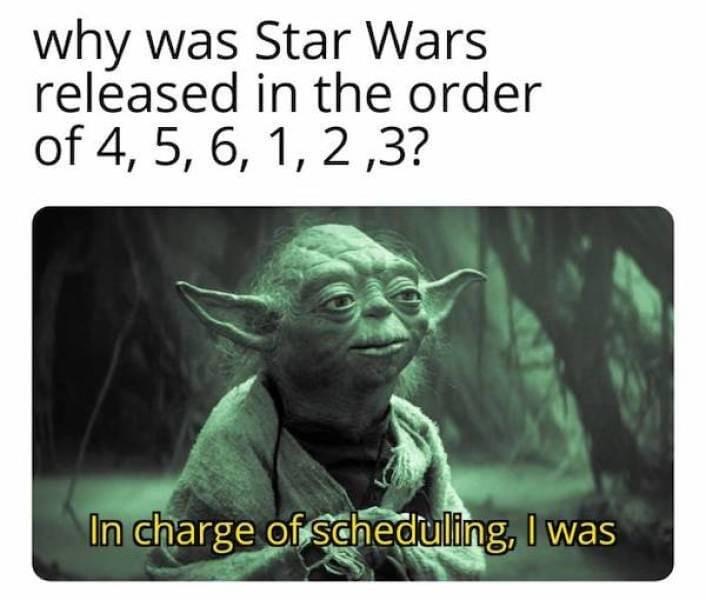 Timothy Zahn original Thrawn books are such great memories from my childhood. I devoured many of the Star Wars “legend” books in my teenage years. I also loved the Jedi Academy Trilogy and The Courtship of Princess Leia. I might have to make some of a these a re-read in my 40’s and see if I enjoy them as much as I remember.

I wouldn’t go that far, George Lucas had a good go with the prequels. I really enjoyed the Mandalorian too.

I think that “side quest” and “non-primary character prequel / sequel” type stories have a lot more opportunity to be good. When they’re working with the main story line though, it seems to become a matter of “how do we top whatever the last movies were”.

Kind of like some of the 2000s reboot of Doctor Who. For awhile it got to the point where every few episodes they had to prevent the destruction of the entire universe. That stuff is cool, but you can only do it so often before it gets a little worn-out, IMHO.

lol. wut? 8 ruined any chance of righting that disgusting sinking ship of a trilogy.

This says everything about what people think of the “new” direction of Star Wars in comparison to the characters of old (even though Ahsoka is a new book). 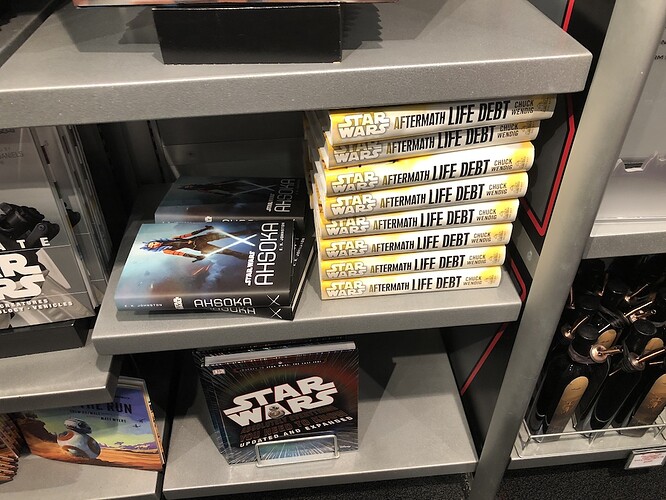 We’ll never agree I suspect, but 8 opened up the world of Star Wars in new and exciting ways, before JJ Abrams went ultra conservative again and closed the door and ruined the trilogy.

Well, the trilogy was already ruined due to lack of any overall planning.

Out of the old books, people LOVE Timothy Zahn, but I’ve always found him a bit boring.

I’m reading the current Star Wars: Thrawn book (the one with the white cover and half headshot), and while I can appreciate his previous books, I’m honestly trying to figure out what Zahn is thinking with the technical aspects of the writing in this one. He shifts back and forth between past and present tense in the same scene, talking about the same characters. The present-tense stuff is italicized, but I’m not quite sure why - and it’s confusing.

“Should we go?” X said.
“Sure,” Y replied.
X looks around and adjusts his weapon
“The ship is over there,” X notes.
X and Y walked to the ship.
X comes to a sudden stop

It’s like he’s giving stage directions for a play in the middle of a description of events. It’s just bizarre.

Ignored his editor? Or he succumbed to the same problem that Grisham had - skipping the novel and going straight to screenplay.