We have a need to wire our home for Ethernet. My wife’s office is a recent addition and as a result is a WiFi dead zone. So I would like to wire up her office and while I’m at it, a few other trouble spots. Some of the wiring will follow heating ducts, some might be attached to walls.

All the sources I see online are saying 5e slower 1Gbps vs 10Gbps for 6 or 6a. Of course 6 is stiffer than 5. Does that stiffness matter in practice?

Our house internet connection maxes out at 1Gpbs now. I don’t expect to pay for another speed bump in the next 5+ yrs.

You might already know - if by follow heating ducts you mean run inside a duct, then the cable must be plenum rated.

While your ISP may be limited to 1Gb/s at the moment, if you think or know you’ll be using a home server, NAS, copying files from computer to computer, etc in the future, 10Gb/s could be justified. The cable is the least expensive part of the job (Unless you’re looking at cat 8 plenum

I used a Wi-Fi mesh setup at my current house, so didn’t need to run any cables. My last house I did wire up (5e; garage up to attic, then to rooms), and cable stiffness wouldn’t have been a concern. I estimated it would take a day, and it took three, so, like I said, cable was the least expensive part of the job.

Generally, cost of materials is much less than labor and time, so go with Cat 6 or Cat 6A.

Cat 5e doesn’t go past 1 gbps but is easy to work with and has noticeable cost savings relative to the other cable types. But anything you put in a wall is a longer-term investment, so keep Cat 5e for patch cables, desktop or tabletop setups, etc. as can easily replace in the future.

For outdoor use (cameras, video doorbell, audio, other uses), Cat 5e is available in a variety of weather-rated flavors, including gell-filled, dry insulated, sun/UV protected, and direct burial, while it is much harder to find outdoor-rated Cat 6 or 6A.

If spanning buildings (like the main house to pool house, barn, standalone garage, outdoor kitchen), consider a fiber optic run instead of copper wire in the ground or conduit. Point-to-point fiber is not as crazy expensive as it used to be, and much fewer safety concerns (electrical, lightning strikes, other risks) by not having a copper link.

Whether the stiffness matters or not really depends on your set up.
I installed a stiff 6A cable, and I have had a problem in some conduits. But, I think the future proofing was worth it and I now have a shielded network cable with enough throughput to handle a lot of data.
In theory.

If you are going to have to read it through a narrow conduit, then a smaller diameter cable might be really handy.

If I had to go out and buy cable, I’d go with Cat6. I’ve been using 5e for awhile because I was given a 1,000’ box of butt-ugly green Cat5e cable. When running cable to places like an office or entertainment center, I usually only run a single cable and use a 4 port switch at the destination to handle multiple devices. In my experience, if you run 2 cables, you will need 3, and so on.

If you want to avoid laying cable altogehter, not sure powerline wifi extender would be an option, may be an interim short term solution

Any Mesh routers would be way better in performance than the power line.

Wow so many replies. If I forgot to thank you by name, I apologize.

Several of you mentioned mesh. I was trying avoid making the original post too long. We already have Bell Canada’s mesh system - they call them pods. Even with a pod directly outside office. Even so she gets poor performance. I’ve tried the Pod in about 6 locations. I can improve the pod connection to the router but when I do internet performance in her office decreases. I suspect our renovation work a few years ago with the kitchen and my wife’s office was done so well that it degrades WiFi signals.

@SpivR a wealth of knowledge. Cat6 is a clear winner. I promise no barns, pools or outbuildings

More seriously the next community member who needs to dig further will know these answers.

@glenthompson You remind of the trick we had a few years ago, run string instead of extra cables. When you need a cable, you attach it to the string and pull it through.

@fuzzygel we had powerline a few years ago, the ones we had then never saw above 50Mpbs even they claimed 250 (?).

@sangadi Mesh should work. However it appears the volume of wood between the router, our kitchen and my wife’s office is so large that it doesn’t work.

BTW on ATP (Accidental tech podcast), one of the hosts John (?) was talking about fiber vs Cat6 because he was thinking about the stiffness and future proofing benefits.

I had an electrician snake an Ethernet cable from basement to roof to family room. I have a switch for all devices connected and happier from day one. Every device is hard wired. Worth the investment

Cat6 is really the best compromise. 6a is more costly per foot and harder to terminate because of the extra sheathing.

Cat6 gives you 10gbps up to 55 meters and the higher gauge wires of 6 and above let you feel comfortable about using them in POE (power over Ethernet) use cases.

Once you become a speed junkie on your network, you’ll move up to five or like the rest of us want to do

run string instead of extra cables

FYI - Pull strings (and there are special/more expensive stuff made just for this - it really is stronger and less likely to break in the middle somewhere so worth the cost if you are bothering to use them), don’t work well over long distances when there are multiple bends or curves between one end and the other.

Also, they really are only valuable for longer runs if inside conduit. The walls themselves usually have insulation and other high friction interference. Raw pull string are fine for the run from behind the TV and an access outlet in the same room/same wall, but otherwise may not be providing the backup intended.

Nerds/Geeks that don’t do cabling professionally have been prone to recommend non-standard and expensive solutions that really aren’t ideal.

IMHO, and that of most installers, internally running fiber for residential use is overkill and borderline ridiculous unless you have a 10,000-square-foot or larger estate-sized home and installing a 10G backbone for video distribution and overall capacity.

I suggest fiber between buildings because of the isolation/safety issues, not bandwidth, and a single point-to-point fiber link, with careful planning, can be purchased already terminated and ready to use.

But for the majority of us (including my own home), Cat 6 (or Cat 6A if you have extra money to spend) is probably sufficient.

I recommend cat 6 for home Ethernet wiring. It supports 10 gbps up to 55m and is much easier to install and terminate than cat 6a.

Yes, it is a bit heavier and stiffer than cat 5e, but still reasonable. Make sure to buy good quality cable, not the cheapest you find on Amazon or a local home store. I used Cable Matters and have been pleased with it.

I also recommend the pass-through rj45 terminals and crimping tool. Take your time to carefully terminate the cables and test them with a cable tester.

Below is a link to a video describing a network installation in a new large home. The owner regrets using cat 6a cable and makes a good case for using cat 6 instead. The part about the cat 6 cable starts at time mark 2:40:
https://www.youtube.com/watch?v=qXQMGmn3xzY

Edited to add: For cable runs that you are sure will never need 10 gbps speed, cat 5e is fine. Even cat 5e can support 10Gbps for short distances.

Just to catch the world up, I ran Cat6 to my wife’s office. Since her office is an extension to the main house on technoposts, it was easiest to drill a hole in the dining floor and run cable along the base boards. Thanks for the advice, you saved from John or Casey madness on ATP thinking about using fibre.

My wife now has WiFi Pod/Mesh unit in her office. She gets 4ms ping, 500+ mbps down and 300+ up. Wired to her desk is 700 each way but for the moment that difference doesn’t seem to matter.

Fellow Bell customer, I just did this too, got a 75 foot white Cat6 patch cable and stapled it to some baseboards and around a couple of doorways. Honestly I have to read the side of the cable to tell the difference between Cat5 and Cat6. After relocating the Gigahub to a central location, (fibre extensions are a thing!), the main benefit of the wire vs wifi for me is stability of the connection to the old laptop that’s used as a server, but the boost from 500Mbps Wifi to 900+Mbps wired at my desk is nice too

By using Cat6 I should be able to upgrade my whole network to 10Gbps by replacing the switch and the Ethernet to Thunderbolt adapter when the price of 10 Gigabit switches becomes reasonable. By then Bell may have also rolled out 3 or 8 Gigabit in my neighbourhood.

Regarding “future-proofing”, I went through our attic 25 years ago and ran this: 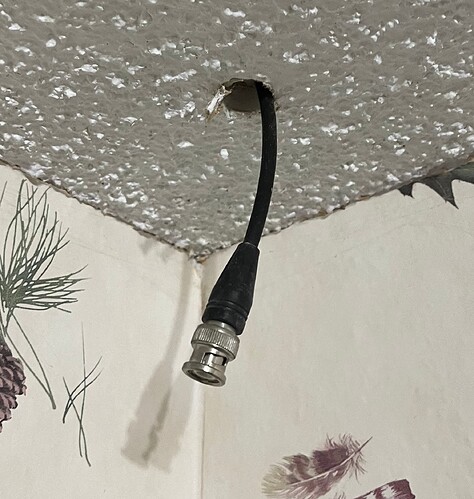 ;-). Hoping that Cat6 cable is futureproof for at least 10 yrs. If we still own the house at time it will be interesting to see if there is any benefit to wires then.

OK, so a general question… If one is building a new house (3500 SF, two levels), would it be better to do a top-line mesh wifi setup or hard wired with cables?

I would do it hard wired with a future proof wiring. This also helps to install additional Access Points for the WiFi, if needed.
My house has a Wired-Network with CAT 7 cable, and a Mesh-WiFi Network.

If one is building a new house (3500 SF, two levels), would it be better to do a top-line mesh wifi setup or hard wired with cables?

I built 10 years ago and had Cat5e drops put in each bedroom plus one in the family room. I wish I had put in more, but they were charging me $100 each. The builder thought I was nuts, “doesn’t everyone use wireless now?”

When we built, I worked for a company that had a lot of anti-WfH people, and we had no idea that in 2020, both of us would transition to full-time WfH plus have kids spending an entire school year at home as well. The WiFi started to get crowded.

If I was doing it today, I’d put in two drops in the downstairs guest bedroom (which has since become my office; I have a 5-port switch in there for three devices), one in the dining room (which is now my wife’s office), at least two behind the TV/entertainment center, and a couple in the basement (which I could easily do myself today as it’s unfinished). All those in addition to the one drop in each upstairs bedroom. Cat6 at a minimum.

Like @Ulli said, you can use those drops to install APs instead of relying upon a wireless backhaul (like the Netgear Orbi can use)

Both. Hardwire any fixed in place devices like TVs and desktop computers and use mesh wifi for portable devices. Also handy to run some conduit between floors so new cabling can be run if needed. In something like a home office I wouldn’t run too many runs but install a switch to handle the devices in that room.