Cool ways you use text expander?

I was wondering if people would be willing to share how you’re using text expander snippets. Here are two of mine, I can’t get them to show without the Markdown parts of the text being formatted (is there a way to implement text as code?). I would love to start a shared MPU text expander group.

Morning Review. I used this everyone morning in Day One. I stopped using it but want to get in the habit of doing this every morning again. I just realized Day One can read markdown checklists so inserts so I added that to my snippet. I borrowed this from Panda Planner who apparently took it from Tim Ferriss who took it from somewhere else I’m sure. 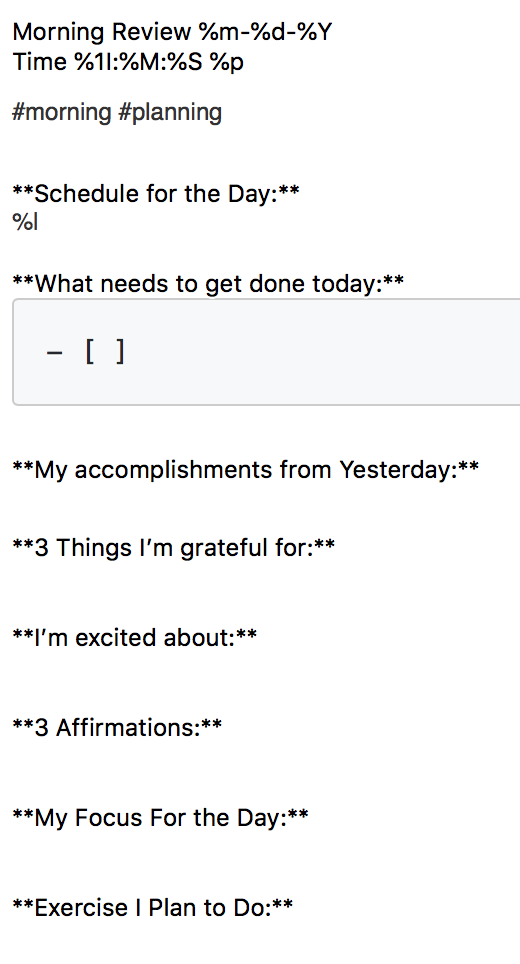 Here’s another snippet from the How to Stop Worrying and Start Living by Dale Carnegie. Carnegie referred to it as the Litchfield technique. I was hoping to create text expander snippets for each technique in the book, but haven’t had the time. There should be a space after each question.

(is there a way to implement text as code?)

To get a code block, put a backtick at the start and end of the line.

Gets you:
**Schedule for the day**

You can also put a backslash before any markdown character to escape just that character.

It mostly worked, but only one * showed instead of ** . Any thought on why this might be?

**My accomplishments from Yesterday:**

If you’re using backslashes to escape individual characters, you need one for every character (so in front of both asterisks at the beginning of the line).

Note that most markdown parsers will display closing asterisks if you escaped the opening asterisk, but that’s more of an implementation detail than somethings specified by the (rather loose) markdown standard.

Thanks! I was able to fix the formatting.

I use Typinator instead of Text Expander but they do the same thing.

I wrote about how I use Typinator personally here. I also share the sets I use in the end of the article.

Thanks, will be checking it out.

I just use IOS text expansion

On the Mac use Keyboard Maestro

I use it for names of composers who have diacritical marks in their names that are slow to type on my American keyboard layout. I type the names without the diacriticals (spelled incorrectly), and they’re replaced by the correctly spelled versions. For example:

These names aren’t impossible to type correctly without TextExpander, but it is a lot faster to do them like this.

Another one is a set of fill-in snippets I use in writing feedback and emails to students. The one I use most is this:

I also have some more complex ones that fill out web forms. The most complicated of those use AppleScripts (JavaScript/JXA, actually) to fill out looooong webforms with information from my clipboard.

I used iOS text expansion for symbols and the like. © ™ ℉

I’ve got various posts about using TextExpander. The ones that process clipbboard text (e.g. sorting, changing case) are quite handy. I had some great feedback on setting up temporary (auto-expiring) snippets. But I think my personal favourites are the ones where I use TextExpander to dump out content from the terminal (/scripts).

I use TextExpander on Windows as well and I wsh it would integrate with scripting outside of JavaScript there. Command line output from a snippet is very handy.

Most of my TextExpander use is pretty vanilla (my most common snippets are stuff that the built in text expansion could do just as well). One that is perhaps a bit cool:

I use TextExpander, but mostly for the usual mundane stuff. I use it for some common code stuff. For instance, I have a snippet that contains a basic HTML skeleton and another that outputs a skeleton of a JavaScript self-executing autonomous function, which I always forget the syntax for.

I have been using TextExpander for years. As a podiatric physician I use TE for charting and documentation. I use a bit of Keyboard Maestro as well, and Moom, too.

My biggest uses for TE are for anatomic parts /1mpj = first metatarsophalangeal joint. I use the “/” key to start all my snippets, but I am considering changing to make it easier to use on iOS. I use a couple other starting characters, too. For example, I use the semi-colon for diagnoses and their codes. For example: ;pfi = Plantar fasciitis (M72.2). These snippets saves me tons of time and makes typing and spelling some of the longer anatomical names faster and more reliable.

I have also set up a number of TE snippets to use for other procedures and documentation. I am a huge fan of checklists (see: The Checklist Manifesto, by Atwul Gawande). This is very helpful to make sure I don’t forget to document something. I also use longer and involved TE snippets for in-office procedures. I can pick from a drop down list of the typical anesthesia I use, the typical dressings I use, and much of the documentation of the procedure, using Single and Multi-Line fill ins where appropriate.

I have also done a ton of snippets within snippets using both the “insert snippet” command, as well as doing some (possibly untoward) moving and arranging of other TE parts within the “Optional” snippet, to allow for an entire aspect of documentation to be included and modified, or excluded.

I have done my fair share of voice dictation using Dragon and Siri and while they are faster than me if they don’t make a mistake, I have found that correcting mistakes takes away much of the time I save using voice.

Glad to have this resource and community here and away from Facebook!

I use Textexpander snippets for many things, but the most tedious typing I ever have to do involves biochemical pathways, molecules, enzymes and so on.

In Discourse, the superscripts don’t show, but in most anything else, the plus signs are properly superscripted in the expanded text. What can I say?

I also have entire emails entered with a few keystrokes such as emails sent to request reprints from the authors of scientific paper.s

Interesting: In the posting box, I see the (supposed to be superscripted) + and the following (not superscripted) “-” as separate characters. But once I hit post, they are converted to ±

Also, the “shrug” character seems to have suffered an injury to his right arm.

This is terrific! I’ve been working on trying to get an entire client agreement into text expander, so far having some formatting problems but I know I’ll get it eventually. And their support is great, if I give up I know I can send it to them and they will help me find the glitch.

I write two columns on a blog that get the same picture each week. My TE snippet enters the html code for the link to the picture and adds the text of the piece from the clipboard. In one of the two it also adds the link to my podcast at the end of the text. This saves so much time!

TE allows me to use DTPO as a type of low-key CMS. It’s obviously not intended for this, but meets my needs perfectly.

Simply put, when in a meeting with someone, I use a lengthy TE macro, that covers just about everything I usually discuss in those particular types of meetings.

By creating individualised/unique “codes” as possible options to select from the TE drop-down menus, I have DTPO ‘watch’ for those same “codes” in text files, in different Smart Groups.

By periodically checking those Smart Groups, and can then see who I discussed what with and when - since they are linked to specifically named meeting notes, and action on them, if necessary.

Once done - editing the text of that code to something else, also using a TE snippet, drops it out of the Smart Group - as ‘done’.