I thought like I had written this up fairly and posted it on the forum, but I can’t find it, so I’m posting it here with a title I can find in the future.

Stephen has made a quick (1m45s) YouTube video of this as well: 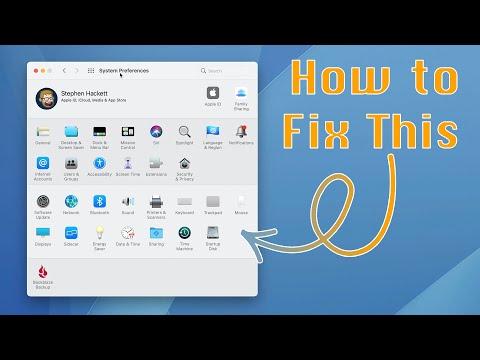 You don’t have to take what Apple gives you!

For example, here’s what I see when I open System Preferences: Boom. Done. Nice and neat, alphabetized, and only showing the ones that I use most often.

How did I do this? Using two options that are built into macOS, but few people seem to know about.

The “View” Menu in System Preferences

Go to the “View” menu in System Preferences by clicking where you see the ‘1’ in the image below: Now, chances are you may never have looked at this menu before, or if you have you might not have noticed the two most important options, which I’ll refer to by the numbers in red in the image above:

By default, System Preferences panes are set to “Organize by Categories”. However, a few years ago, macOS changed so that the System Preferences app no longer displayed the category names. Sure, people might have remembered them for a while, but now? I bet few people do. Using “Categories” is one of the main reasons that it looks so chaotic.

Switch to “Organize Alphabetically” and I bet your brain will immediately breathe a sigh of relief. “Yes, That’s so much better! Thank you!” it would say… if it could speak.

You could stop there and already improve your System Preferences experience by at least 37%.

But don’t stop there.

Actually, let’s think about it from the other direction: Which System Preference panes do you use most often? For me, it’s these:

but here’s all of them: I use Touch ID all the time, and Wallet/Apple Pay, but I don’t go into the System Preferences for them very often. So why do I need to see them all of the time?

The obvious answer is “I don’t.”

Go View » Customize… and uncheck all of the ones that you don’t use at least once a week.

I can hear some of you questioning my wisdom, and that’s OK. Change is hard. Questions are allowed. Even though I’m 100% right and you should definitely do exactly what I’m telling you.

However, someone might say “Well, I might not use them all that often, but that doesn’t mean that I want to disable them. I don’t want to have to remember to go back and go to ‘Customize’ and then check the box again just because I realized that I wanted to change a setting.”

That’s actually a fair point and a reasonable question. That does sound like it could be annoying and/or frustrating.

But… what if I told you… that your concerns are entirely unfounded?

Here is a secret bit of wisdom that I am here to share with you that isn’t secret at all except most people have never tried it so they haven’t seen it for themselves:

If you uncheck the box, it just does not disable anything. It simply prevents the icon from showing in System Preferences. You can still find the settings via “Search” or go to the “View” menu…

Let that soak in for a moment.

Now, go back to System Preferences and click on the “View” menu that I mentioned earlier… and look at the whole list.

But I have 16 icons showing in System Preferences (not counting “Apple ID” and “Family Sharing” at the top).

If I went through the “Customize…” menu and un-checked every blue checkmark, do you know how many items I would have in the “View” menu?

If I un-checked the blue checkmark next to “Mouse” and then went to the “View” menu and selected the entry for “Mouse”… the “Mouse” pane would open in System Preferences.

The same goes for jumping right to a specific System Preferences pane using LaunchBar or Alfred, etc. It will work the same as it always has.

The “Customize…” menu does not disable any functionality, it simply determines which icons you see when you open System Preferences.

So… why limit the displayed System Preferences panes to the choices that you actually use most often?

The only thing you have to lose… is clutter.

p.s. - to answer the inevitable question… no, I don’t actually need to access “Startup Disk” all that often. I wanted my System Preferences window to have the same number of icons in each row, so I left it enabled. I could swap it out for another, and probably will eventually.

@MacSparky and @ismh were talking about the lack of logic behind the order of panes in System Preferences. Stephen said he just uses search. Search is good, but there’s are two other suggestions I’d make, indicated by the two arrows in this screenshot: [System Preferences Customize Alphabetize] 1. Step One (white arrow): “Organize Alphabetically”. This will organize all of the panes alphabetically, which makes much more sense than the “Categories” that Apple uses by default. 2. Step Two (re…

This is great. As obvious as it seems in retrospect, I had never looked at the View menu in System Preferences to discover its secrets.

The logic of the default *Organize by Categories" is arcane and must be well-guarded by some secret department within Appledom. Why Language & Region and Notifications are in the same category is a mystery.

I had already used Customize to reduce to just 3 rows. What I would love to see is being able to manually rearrange the icons.

Thanks for posting this. I will rearrange my system preferences today. Am I correct to assume that “Wallet & Apple Pay” only shows up on computers with Touch ID (laptops and the new M1 iMac)?

One of the misteries of System Preferences is that it has a forward button.

Wow, I never even thought to look at the menu bar for System Preferences. Sorted. Like you said, I’m typically jumping straight into it from Alfred, anyway, but this is nicer browsing.

Thank you so much for taking the time to write down this piece. Cheers!

Thank You!. I never knew that sort option existed, It is much easier to find a particular setting now.

Ugh. I knew it was out there somewhere. Not sure why I didn’t find it, but I named this one with all the search terms that came to me, so hopefully when it comes up again I will be able to find this one.

System Preferences is that it has a forward button

Yeah, that seems like a relic, too, doesn’t it?

But if you click on a pane, and you can then click the < to go back to the start page, and then > to go to the pane you just had opened.

I don’t know why anyone would want to do that, but you can.

Thank you, I never knew about either the alphabetical view option OR the customize icon. As you anticipated, I’m not comfortable removing less used items even though I can search for them or change this later. I don’t feel I have a good handle on the settings I alter the most (other than granting permissions for new apps/devices). And, it’s useful for my memory to see the less used apps. It’s not a hindrance to me. However, I still need to document this adjustment in my system tweaks file for macOS because when I get a new mac or wipe a mac due to problems I don’t remember all the tweaks I’ve made along the way. But, this instruction is awesome and I love your method even if I’m not following it exactly. I may in the future!