Good news. I just turned on my computed and noticed this:

Hopefully, this means that it will stop eating up so many resources.

Which version are you running? Mine still flags “Intel” with no update available:

Version v140.3.1861, apparently. I might have checked a box to receive beta versions somewhere, but I am unsure, and I can’t seem to find it any longer. I also read somewhere that they would release it to part of their userbase as a test.

I think a lot of us would appreciate it if they were more transparent about how they roll out their releases as opposed to random auto-updates. But, having said that, I am nevertheless glad to see it out. The Apple Silicon build is in beta I believe. Hopefully out to all of us soon!

I think its a cryptic and slow roll out… Ive done nothing special and I have the AS version. I bet we all do by weeks end

I switched to Maestral a few months ago (when I got the new MBP) and haven’t missed the native app. Are there advantages I’m forgetting about that should cause me to reassess?

I switched to iCloud Drive years ago. What does Dropbox offer that iCloud does not?

Visibility into what’s happening. Progress icons. Buttons you can click to refresh/update when something isn’t as you expect.

Those are the snarky answers.

The real answer (for me) was far more robust sharing and security options than iCloud Drive. I use both - iCloud Drive for my documents and desktop folders and Dropbox for my work/client work.

Hopefully, this means that it will stop eating up so many resources.

Does Dropbox still use Python?

This was what made it super resource intensive in the past. Python is on the order of between 10 and 100 times less efficient than lower level languages, depending on what it’s doing and the framework/language being used. Also, it consumes a magnitude more resources - this is with native Python not Rosetta. I think going from Rosetta Python to native Python won’t make that much difference, it will still slow down a system considerably if it has to do a lot of processing.

There’s an official post on the Dropbox forums that said they are doing a limited rollout right now and hope to have a public eat for everyone by the end of the month (Jan 2022).

Inexcusably slow, but it’s a moot point now, as they seem to finally be almost ready to release at least something.

Here’s a link to the post, although it doesn’t say much more: 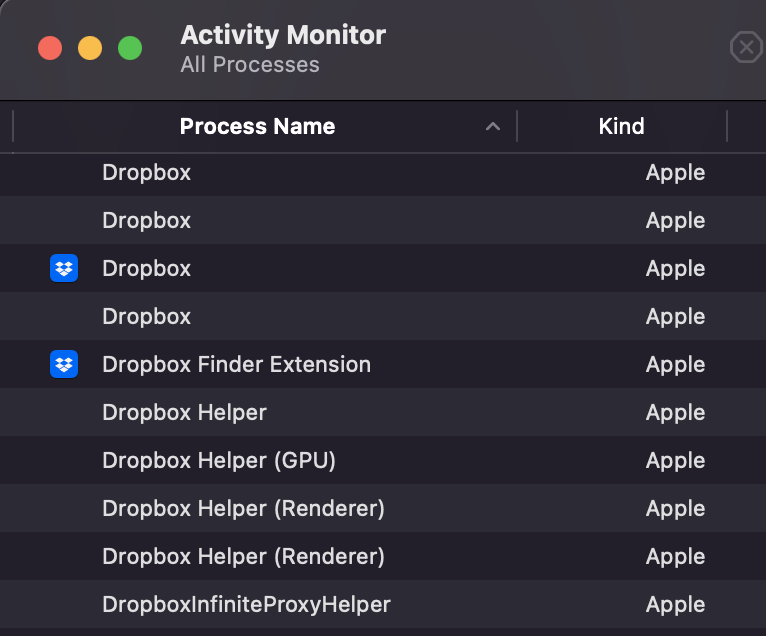 Those are the snarky answers.

My snarky answer would be “it works”. Seeing as iCloud hasn’t for the last 2 years.

Everyone’s experience varies, I know, but I haven’t had a single sync issue with iCloud (Documents or Desktop) in the last several years. This includes moving from multiple computers and keeping a desktop and laptop in sync at nearly all times.

Yeah, it was faultless (OK, sometimes a little slow) for me for years, too. Until it wasn’t. And now my issue has also spanned multiple OS versions and multiple laptops, while working faultlessly on one phone and two different iPads. Which reminds me, time to follow up with Apple.

BTW - an Apple Silicon installer is now available at this forum post:

Or use this direct link:

Note: They release betas pretty regularly, so if you are reading this more than a day or two after January 12, 2022, checkout the Dropbox forum here:

I switched to Maestral a few months ago (when I got the new MBP) and haven’t missed the native app. Are there advantages I’m forgetting about that should cause me to reassess?

Haven’t missed the official app once or had any sync issues I’ve noticed.

I was really enjoying Maestral until it ran into a problem with the API that the developer has not been able to fix in the two months since it was first reported:

so now I’ve gone back to the official app. Hopefully one day I can try Maestral again, but knowing that the app can so easily be crippled by an API issue and that Dropbox, Inc. is clearly in no rush to help makes it less likely I’ll let myself depend on it.

If you want to be sure you’re using the Apple Silicon version, download this and just install it right over your existing installation.

It should eventually upgrade itself, but I don’t know that it will especially since they are releasing separate Intel and Apple Silicon versions. Given Dropbox, inc’s history, I wouldn’t count on it working right automatically.

That link above is from this web page:

I just linked directly to “Offline Installer (Apple Silicon)” from the first post on that page.