I am currently running Eero 2nd gen and two Beacons. I really do not want to give up the Beacons, but don’t mind upgrading the main Eero to Eero 6. Will this work and will I get improve speed or the Beacon will be the bottleneck?

I replaced my first gen eero with an eero pro 6 along with 2 beacons and I’m not seeing any issues.

I looked into this a while back (I have a 3 unit Eero 2 Pro setup) and the company says that their newer units will interoperate with the older ones. You will not get WiFi 6 speeds when connected to the older ones though, of course.

Thanks. I will consider upgrading my main router to Eero 6 then. I really like the Beacons. It’s a same they don’t make a Beacon 6. Both tests were run from my M1 Mac mini in the office.

For both tests, the Mac mini was connected via Ethernet to a “remote” eero unit in the office, which is basically at the other end of the house from the router (that is, as far away as you can get from the router, unless you go downstairs).

I re-ran the eero pro v6 test just to make sure it wasn’t a fluke: Yup, I think I’ll be keeping the new one.

Did you check the Eero’s speed on the unit connected to the modem? I get 650-800 on my gigabit Cox line but the most I’ve seen at a device is about 450.

What were the speeds when connecting via WiFi? I’ve and similar improvements. It is more than just numbers on a screen though. It’s noticeably faster at everything.

To those who say “Hell hath no fury like a woman scorned.” I say wait until you see the fury directed to a husband and father of a flacky WiFi network.

During the lockdown when my wife was counting on a reliable network for numerous Microsoft Teams Video calls she started to experience drops in Wi-Fi connection to her new, company provided, Dell Computer.

She also said that my daughter was experiencing similar problems during her zoom ballet lessons.

I really must applaud Eero’s 2nd level Tech Support they were very knowledgeable and patient but after six hours my wife was still experiencing the same problems. We moved beacons, testing signal strength along the way. As a sidenote one of the things I learned is that the signal can be too strong and beacons can interfere with one another.

$600 is a lot of money but when your wife is unable to work effectively money becomes no object.

I purchased an Eero 6 pro and justified it by the fact that I would plan to have it for at least five years, and while my iPhone is the only one that has Wi-Fi 6 I expect that in the future more and more devices will support it.

Personally I did not notice much performance improvement when I went out to the Internet but I did notice it when I was copying files to my QNAP NAS. It is not so much about speed but rather volume, you can have more devices connected without degradation.

I live at the beach and have an 1800 square-foot house and so I was really surprised after installing the new Eero 6 Pro hub and moving the previous Eero hub to the furthest point and connecting it via hardwire CAT 5e Ethernet cable that my wife was still having dropouts.

So at this point I’m probably eight hours and $600 into a solution that is not working. Eero Tech support and Frontier seemed a bit confused about which box needed to be in pass thru mode. But we finally worked through it with us all on the line.

I hate when you forget the basics. Nature has a way of teaching them to you again.

One of the fundamental things I learned while working at DEC is to first ask “what changed.”

I had not focused on her new computer because she had indicated my daughter was having the same problems which turns out to be due to the ballet school versus my network.

We were finally able to get through to one of the more knowledgable systems engineers at her company who was able to determine that there was a setting in her new computer that was putting the WiFi to sleep.

The good news is that I was able to clean up the wiring to my Netgear switches. I replaced the cables from the Eero and Netgear switches to the router with Cat 8 cables, I now have WiFi 6 to my phone and I visibly showed my wife how much I love her and without having to remind her she knows she owes me one.

Has anyone upgraded to Eero secure or secure plus?

What are your thoughts. Do web pages load faster when ads and other junk is blocked by the router? 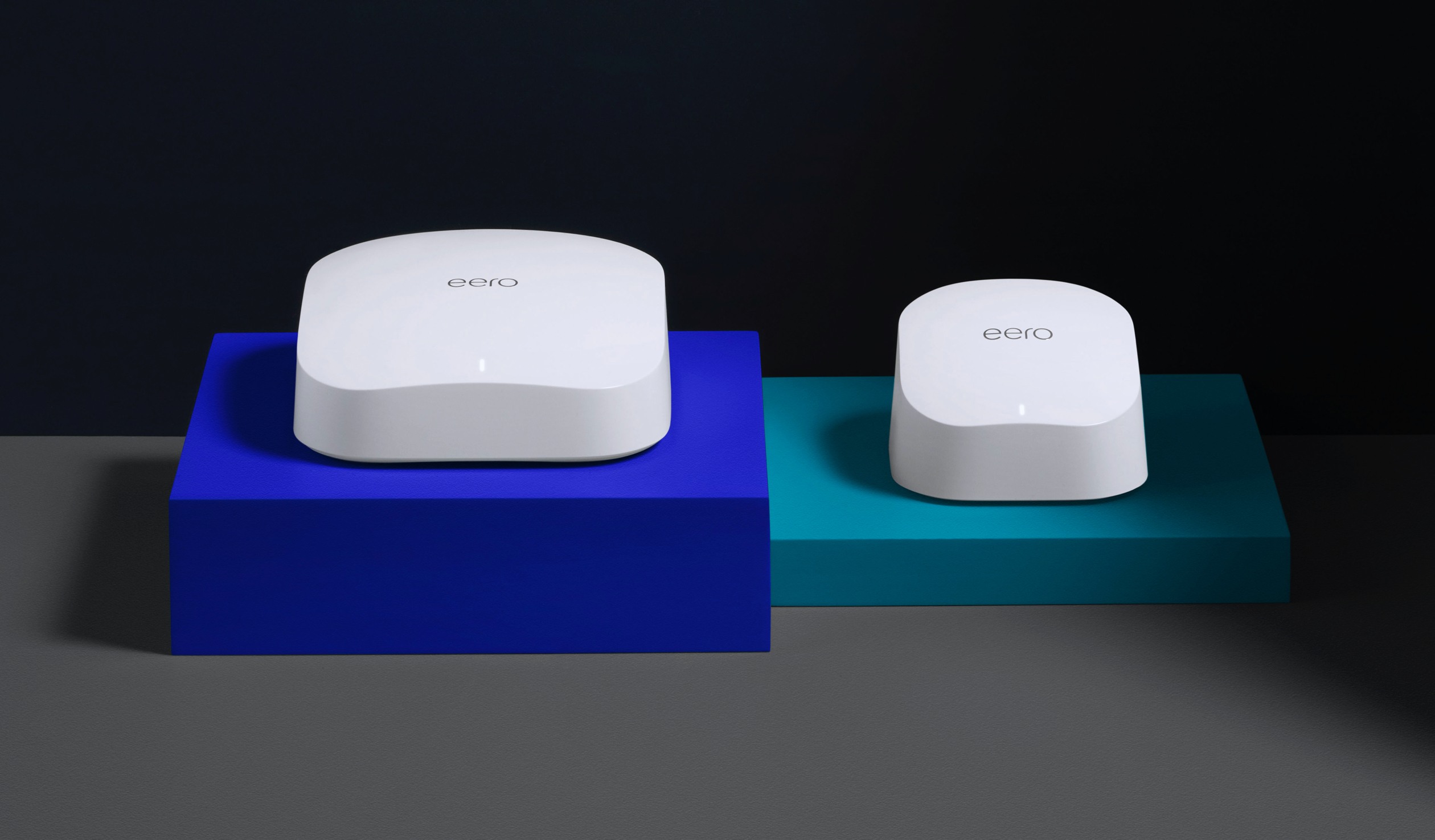 eero is the world’s first home WiFi system. A set of three eeros covers the typical home. They work in perfect unison to deliver hyper-fast, super-stable WiFi to every square foot. It’s simple to set up. Easy to manage. And gets better over time with...

I doubt any of the ransomware attackers would target me but I do worry about being collateral damage. Despite repeated warnings my wife and daughter are quick to follow links that are a bit sketchy.

I have most of the software that’s included with secure plus but if it was easy to move my subscriptions over I would be more likely to go with the bundled Eero solution.

Did you check the Eero’s speed on the unit connected to the modem?

I just did a speed test from the eero app itself, and it reports 461 down and 22 up, which actually isn’t all that different from the prevue

What were the speeds when connecting via WiFi?

Speeds via Wi-Fi were 262 down… now that was tested as a different time (just now) so it might not be a complete “apples to apples” test, but it’s still “262 over Wi-Fi” vs “95 on Ethernet” before.

I use Eero Secure+. Paid for most of the cost with the included 1Password subscription. Malwarebytes and Encrypt.me were bonuses. Haven’t really tested it to see how effective the blocking is and whether it improves load times that much. Might have to give that a test sometime.

What’s your topology? I’m getting 300 down on my iPhone, and 500 down on my iPad, and that’s on WiFi 5, not WiFi 6 (so the iPad is getting the max possible speed.) I don’t know offhand why the current iPhone can’t also get 500 when it’s on 5ghz, but that your iPhone is 150, half of mine, suggests a problem somewhere.

Has anyone upgraded to Eero secure or secure plus?

What are your thoughts. Do web pages load faster when ads and other junk is blocked by the router?

Secure is okay. NextDNS is cheaper but more fiddly. NextDNS will also tell you exactly what the bad visits are which is information you may or may not want to know; Eero abstracts the threat/content reports to only tell you which devices are doing it and on which day. Performance has been good. I also enable DNS pinning in Discover > Labs; that is a significant boost and doesn’t require a subscription. I don’t have Secure+ but it’s supposedly easy to move your subscriptions over. Secure+ also lets you run a public server from your house using a domain provided by Eero, with Eero keeping the information up-to-date automatically, which could be nice if you want to access something like a home media server.

I have most of the software that’s included with secure plus but if it was easy to move my subscriptions over I would be more likely to go with the bundled Eero solution.

I switched from a separately-paid 1Password Families account to the “free” bundled version that came with eero+. I don’t remember the process exactly, but I do remember that it was very easy.

Getting EncryptMe was a nice bonus. I don’t use it all that often, but it’s nice to have, and definitely “pays” for eero-plus-secure-pro-max or whatever it’s called. I don’t use MalwareBytes, but I guess it’s good to know that I could.

I don’t know how much of a speed difference blocking ads makes. Seems obvious that it has to make at least some difference, especially with the video ads and other crap they always seem to want to push.

I can tell you that I really noticed a huge difference in the number of absolute garbage ads that I saw when I was on my Mom’s Wi-Fi network for a week, which does not have eero+.

Thanks to everyone for this discussion. On Thursday I will be upgraded to 1GB speed which will make it worth considering some of these things.

I just re-ran the Wi-Fi download test on my M1 MacBook Air, a little after midnight (local time) and got 408 down.

I recently changed broadband providers in the UK from Virgin Media to Zen Internet. (I know this thread is more about WiFi, but David’s point is important) and went from 120MB down/10MB up to 65 Down and 20MB up.

The new ISP improved latency massively which has made such a difference to my Daughter’s online gaming, and everything feels faster, despite the slower download speeds.

And of course with the faster upload speeds, my Backblaze backup rarely gets backed up.

So whilst the headline figures give an indication, it’s not the whole story.

I doubt any of the ransomware attackers would target m

Ransomware attacks aren’t always targeted, many are randomly delivered via Spam or webpage drive by. Please don’t think that Security by Obscurity is a thing.