So, with the resurrection of Newton ($50/year), Superhuman (120/year), and finding myself wanting a true power user email app, I’m considering Airmail again. I’m ready to pay for a quality email app. I know they botched their switch to subscription in the worst possible way, I know support is really subpar, but it’s the only app that can be customised in any way you want to. They now have

At $10/year, it’s a steal compared to the other paid apps. If it works as advertised (… a big ask from those devs, I know), this + the Sanebox filtering might very well be my email Holy Grail.

Has anybody stuck with Airmail despite all their recent fails? Anybody happy with it?

I will experiment for a while and report back.

I use it, and like it. The send later feature is essential for me, and I also appreciate being able to snooze messages.

I also use and like Spark. I use Airmail for work email accounts and Spark for everything personal. (Keeping those separate helps me to stay out of work email after hours and on weekends.)

Things is my task manager of choice, and both work well with it.

I dunno man. If an app is essential to your daily workflow, 10/year is perhaps too cheap i.e. too good to be true? I have used various versions of airmail before, falling in their trap ever so many times. With many emails per day to process and many of those of very variant content type, the failures of airmail becomes clear quickly. (Rendering issues, search is hopeless, losing emails etc)

I send in so many bug reports, they always ask for more data. Seems more like a stalling technique than actually wanting to fix something.

They messed with their user base for years, never made a solid app, think they are all good now? Its possible but i would never try them again, certainly not for $10/year.

10/year is perhaps too cheap i.e. too good to be true?

Airmail hasn’t had the greatest track record for reliability (which you mention) so maybe setting the bar low is a good idea? However, that means it’s going to be hard to raise the price later if they aren’t making enough money…

Airmail hasn’t had the greatest track record for reliability (which you mention) so maybe setting the bar low is a good idea? However, that means it’s going to be hard to raise the price later if they aren’t making enough money…

Oh from their point undoubtedly they just try to attract customers. But from the customer’s point of view (ours?) the $10/year is a red flag - that is what I was attempting to point out.

I bought Airmail before it went subscription and was pretty unimpressed, having encountered many bugs, especially inconsistencies when swiping. From what I hear the search functionality still isn’t great. And someone on Reddit recently noted ‘Airmail 4 Marketing Email… fails to render correctly in Airmail 4’ D’oh! 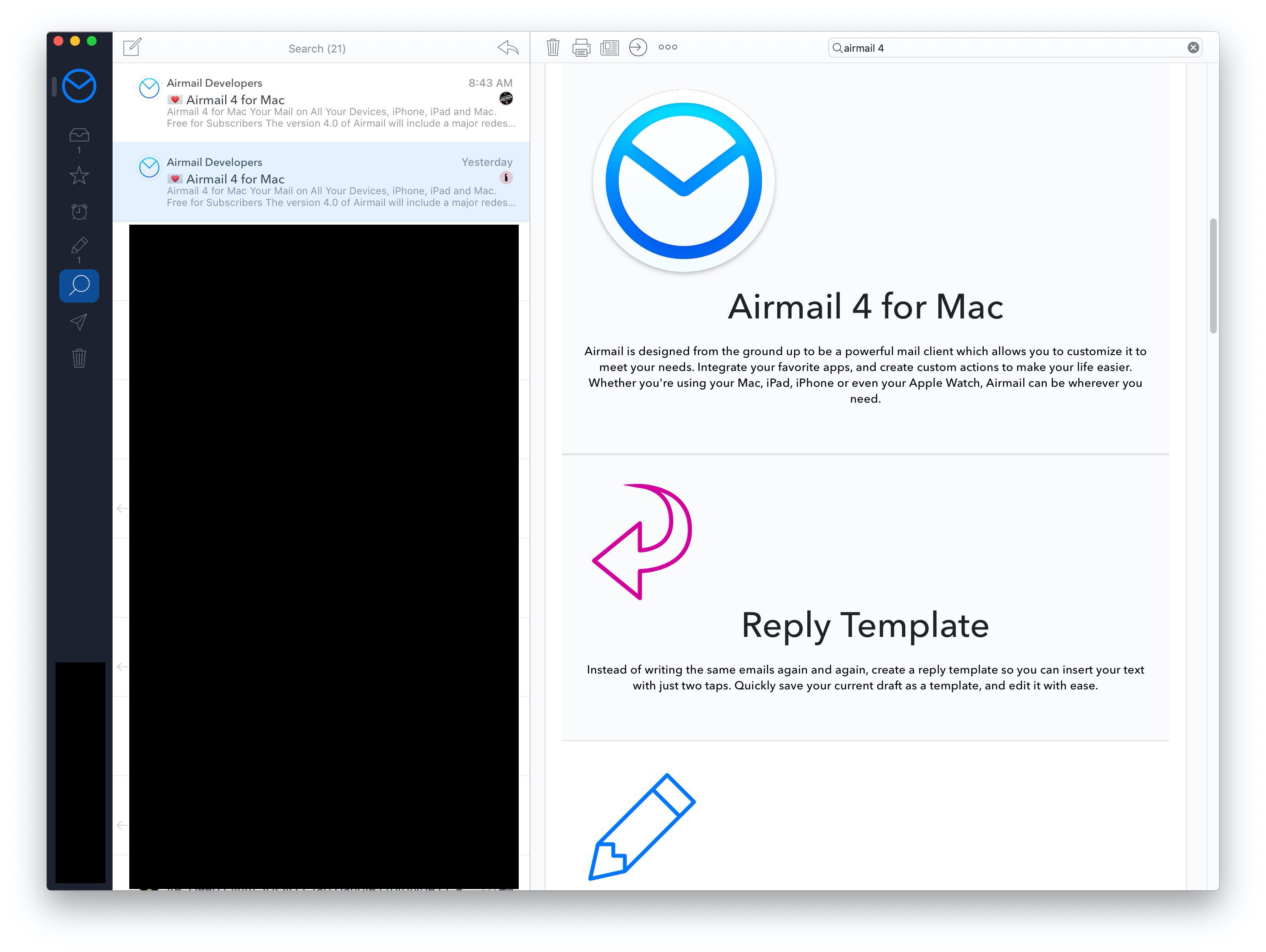 Glad to know it works for you (at least)

Yeah, they botched their switch to subscription but from what I see, it’s the only email app with a complete feature set. I know it’s always been buggy, I have used it for years before giving up in disgust, their care to detail and polish is laughable, but I hope the subscription pricing will allow them to get their game finally straight. What I can see is, since the switch, there has been many more upgrades (including major features) while the app has been left to die before.

Anyway, will report back!

Just discovered, as I was poking through Spark preferences, that Omnifocus is available as a service there, just like Things is.

So the integration is there. Whether it’s any good, I don’t know.

It works (I used Spark as my daily driver for six months), but on iOS , if I remember well, you can only send the emails to the inbox, needing an additional processing step which is a pain. Also, you cannot access the Spark:// links to emails easily the way you can on Apple Mail or Airmail.

I’ve tried repeatedly to use 3rd party mail clients, especially Spark. I’d love to use them but inevitably, I run into issues, e.g., rendering problems, problems copying extended text from an email (Spark’s card system layout makes this difficult), minor incompatibilities within iOS, etc. I’ve concluded that Apple’s mail app is good enough and overall is a better experience, notwithstanding the lack of power features. On the occasion when I need the power features I’ll process the email in Gmail. This is unfortunate because the 3rd party apps have a lot to offer, I just find the friction points to offset the gains from the added features.

I’ve tried all the different t clients out there, and I always end up frustrated because I have issues. Apple Mail lets me get on with my work, despite not being perfect.

Nevertheless, I hope it goes well for the op with Airmail, I’ll be watching with interest.

Also, you cannot access the Spark:// links to emails easily the way you can on Apple Mail or Airmail.

True, but one can use a Keyboard Maestro Macro that does the trick for me.

It’s a simple AppleScript that does the job in pasting the frontmost message spark:// link into wherever text box I’m currently typing. Ooooh that’s a VERY neat trick. Thanks for sharing! I thought this was possible only in Apple Mail. Means you can also have a TextExpander snippet. Very cool!

To be honest I have tried as much as possible to get by with Apple Mail and SaneBox and I have been fine (I like that Mail is blazing fast). I just miss being able to send reliably messages from Mail to OmniFocus on the go on my iPhone (still using Dispatch, but it’s getting long in the tooth) and I’ve been itching for a Send Later feature, so…

I have used Airmail on iOS/iPadOS for a few years – and though the subscription thing was annoying, I got past that and paid up because I like the way it operates. Courses for horses.

Lately I got fed up with the Apple Mail – for me it’s a mess compounded by endless issues with SpamSieve integration failing, shutting itself down, and other issues, and then Mail’s inability to correctly configure with my Dreamhost-hosted email accounts (for work)**. I gave up, deleted all accounts in Apple Mail, then moved all work over to Airmail. So far it is done what a mail client should do best: stay out of the way and don’t bother me with technical glitches.

Yeah, Airmail search sucks, and lack of Spotlight integration sucks, but instead of fighting everyday with the Mail client all I do now is go into and out of Airmail, get the chore out of the way and move on. And, SpamSieve works better with Airmail than Apple Mail for some reason.

FWIW, I have never had a technical issue or bug with Airmail. Just luck probably.

** I would abandon Dreamhost and migrate away, but have no time to deal with migrating to another hosting service.

I understand that. I use ASANA so I can send any email or email reply directly to my task manager so that I not a critical function. Send later often is. When that is the case, I use Gmail. I only need that function perhaps 1-2 times every two weeks or so, so that feature is not enough for me to abandon Mail. But again, I would jump to Spark in a heartbeat if not for the various issues that crop up when using it.

For power email use cases requiring extensive customization, there also are two lesser-known apps that I just finished reviewing: AltaMail and Preside. Their learning curves can be daunting but, if you really need all that they offer, they are reliable, highly rated on the App Store, and provide many if not all of Airmail’s strengths and none of its well-known weaknesses:

There’s no MailMate for iOS, but these try to play in the same ballpark.

Those both look very interesting. The devs have no access to my emails and the pricing isn’t bad ($10 and $25 per year, respectively).

I wonder why they’re both so under the radar.

So, reporting back as I said after some light iOS use and intense macOS use:

Never thought I would say that about this app but I’m… delighted. It works flawlessly, and even went beyond my expectations. It’s lightning fast, like Apple Mail is (especially when you disable the animations on the Mac), it’s beautiful, search works absolutely fine (using Fastmail as backend), and it’s all the qualities of Airmail we know - customisation, flexibility, power features. It still lacks some attention to detail here and there – some windows are funky, some translations are missing, some strings are too long and don’t fit where they should – but the basis functionality is really solid. Airmail + Sanebox finally gives me the email Holy Grail solution I had been waiting for. Very happy with my subscription and seriously recommending everyone who is not entirely satisfied with their current email app to give it another chance.

Ok, I’ll bite and give it one more chance but I’m skeptical.