Anyone try the paid app that is for posting photos? It looks to me to be a viable replacement to Instagram without the Facebook baggage and loss of privacy. 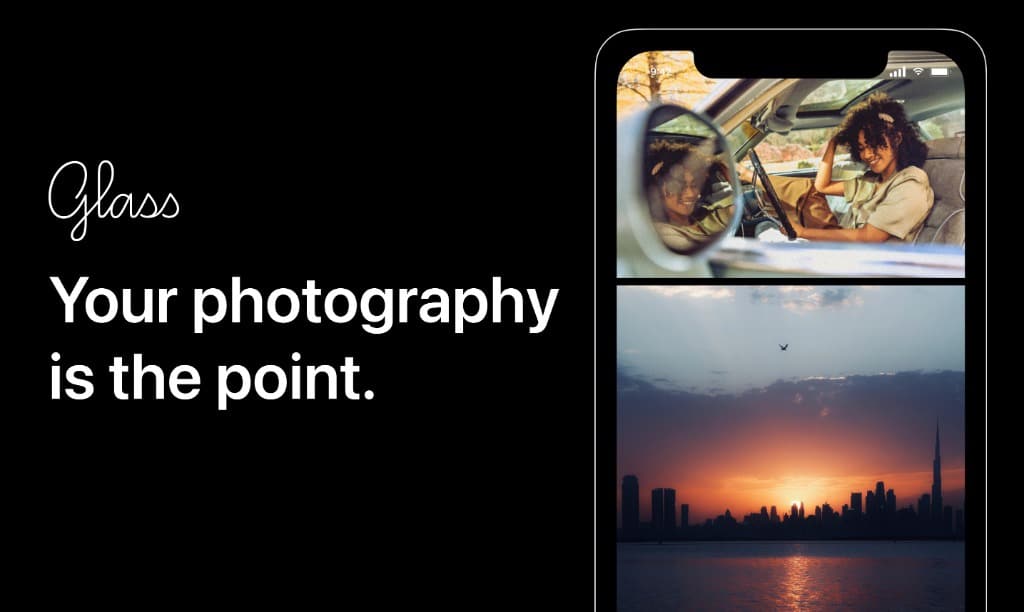 Glass, An Ad-Free Subscription Based Photo Sharing App That Focuses...

Glass is an ad free subscription based photo sharing app that focuses solely on photography.

It’s getting some really good write ups. The question for me is whether it can get enough people to sign up at $45 a year.

I can’t decide whether to join or not.

I’m number 3785. I’m going to be more keen about better photography when the wife and I upgrade our phones this year. The distraction free interface sounds great …i’d like to see good sharing options as well.

I’ve signed up, but there are significant overlaps with another service I use, micro.blog.

The quality of the photography on Glass so far has been excellent though. I’m amazed that Flickr hasn’t been able to achieve something like this, given their massive headstart.

It’s a really polished app already. I love that the focus is on photos and not number of likes or followers. In fact, you can only leave comments so it encourages a sense of community.

Edit: I have 3 invites if anyone is interested in joining Glass.

It’s a beautiful app. Myself and my wife have already switched over. No more Facebook owned companies for us. It’s glorious.

https://500px.com has been providing a similar service for years, with a free tier.

Does anyone remember the pay to use competitor with Twitter from years ago? I don’t remember what was called…but it’s long gone.

yes that was it…. App.net - Wikipedia

You can get a free month of this if you look at this week’s show notes to a very popular Apple blog’s podcast. Hint: the initials of the blog are DF. (It feels wrong to actually post it here.)

It’s $30 a year after that. iPad app is great and a web page is coming soon. I am really impressed with it, but it seems to be full of people who are really good at photography, so I am a bit intimidated to post myself.

You convinced me to sign up @Leeabe51, my handle is @geoff-airey, anyone else a member and wants to share their username?

@ptgn123 I’ve been a member since last year. It’s a great app and service.

The podcast is The Talk Show with John Gruber. I think it’s ok to say that here. The moderators will correct me if not.

It’s not a replacement for Instagram, because all your friends and family are on Instagram. They’re not on Glass, and they never will be.

However, from the podcast, I learn Glass is a place for photo pros and serious amateurs to share photos and tips. And a serious amateur can just be anybody who would like to take nicer photos, even if they’re just using their phone. (Same as how a Mac Power User is anybody who wants to use their Apple gear more effectively.)

I bought a Nikon D3500 and a couple of lenses for an African safari trip my wife and I took in 2019. I used it heavily there, taking literally hundreds of photos a day … and have barely used it since. The podcast makes me think I might like to pick it up again, and start sharing photos to Glass.

The podcast is The Talk Show with John Gruber. I think it’s ok to say that here. The moderators will correct me if not.

I just didn’t want to give the code out here. But yeah, I am not sure why I was being cryptic.

I am @leeabe51 on it, but I haven’t actually posted anything.

I did not post the code either, partly because I agree with your decision. If people want the code, they should listen to the episode.

Also, I can’t remember the code.

Can anyone who’s a Glass member confirm whether the iPad app is available on M1 Macs please?

I’ve not joined Glass but early on it struck me as something that would not last and I still have doubts. Just observing from the outside it seems like the sort of thing that got some early traction in the Apple community, a jump on the cool new thing sort of thing. From the casual onlooker perspective my initial thoughts/critique was, why not Flickr? I don’t actively use Instagram or Flickr as much as I used to but if I were interested in more serious photography in the way that Glass seems to offer itself, I’d just go back to Flickr. I just logged in again and after a few minutes looking around I still see many of my old contacts perusing their photography in a serious way. It reflects my memory that Flickr was the place for serious amateurs/semi-pros. But it’s also open and assessable on the web to any platform with excellent apps. The pro plan is a bit more expensive than Glass but comes with quite a few side benefits that come with membership. And it’s got a decent free plan.

When I last used it regularly my experience was that it was a very positive community. My guess is that Flickr is sort of the old thing whereas Glass is the new shiny.

It does not appear to be available.

I were interested in more serious photography in the way that Glass seems to offer itself, I’d just go back to Flickr. I just logged in again and after a few minutes looking around I still see many of my old contacts perusing their photography in a serious way.

I used to be semi-active on Flickr in its heyday and went and logged back in after years last month (had to go through the hassle of changing it out of Yahoo mail). The majority of the people I followed haven’t posted in years. It doesn’t seem as busy to me, because it used to be a could post a picture and it would still rack up some views and a comment or two. It seems kind of quiet now. There is a lot of nice stuff there, I just don’t think it’s the place to go now like it used to be.

I am skeptical of Glass making it as well, it needs a web version (it’s coming) and a free tier to get people on there. Also being iOS seems like it is severely limiting. I am willing to give it a try though and I like it so far.