How many of you have your own white board?

I do. I sprang for a porcelain one, 4’x3’, couple of hundred dollars. I don’t use it often, but it’s nice to have the work space, and to see the residue of my mind on it.

I think this was the last time I sat foot in an office supply store. I’m thankful for that.

I kept one until very recently, I’ve been working myself to use my iPad Pro more instead.

Whiteboards are the best thing for working Kanban boards, when you have large projects that involve multiple jobs and tasks, and you need to see it all laid out on timelines. You could use a Gantt chart planner like OmniPlanner, but for many projects that can be overkill.

I thin OmniPlanner is overkill for anyone whose job is not solely planning.

Sadly. My significant other have veto:d all of my attempts to acquire one. Apparently, they don’t look good. Not sure if she refers the whiteboard itself or my handwriting…

Instead, I have to make do with my iPad.

I’ll loan my flipchart paper and stand. That may make a sleek whiteboard look like a better choice.

Great idea! The browner the color of the paper, the better my chances at persuading her. You don’t happen to have a chalkboard as well?

You don’t happen to have a chalkboard as well?

Personally, I wouldn’t go for the chalkboard. I just think about all the dust that it would create. Pens are also more readily available.

But think of the sweet noises you can create with nothing but a chalkboard and a chalk.

I could not image working without a having a whiteboard in the corner, I also find notes on post it notes to be effective

You don’t happen to have a chalkboard as well?

My spouse, however, approves of chalk usage on sidewalks. No chalk boards here anymore…,

Exactly! Think of it this way: after having argued unsuccessfully in favor of the chalkboard, the chances of her saying yes to the question: “can I at least have a whiteboard?” should be vastly improved.

My spouse, however, approves of chalk usage on sidewalk

Lucky you! I happen to live in a city where it rains about every second day. There’s no way I could use the sidewalk as a proper kanban board.

I have 3, one I set up every year for the lambing scoreboard and other times I use it to plan LambTracker code. SOrt of kanban style, all my bugs and enhancements are on 3 inch post-it notes and I use it to organize and plan them on occasion. One is small, used for short notes and the latest is a 3 panel display board with a felt board on one side and whiteboard n the other. Will be used for a class on sheep AI this winter, probably at the farmers market this month and maybe even for SW development stuff.
Here’s the lambing scoreboard from this year: 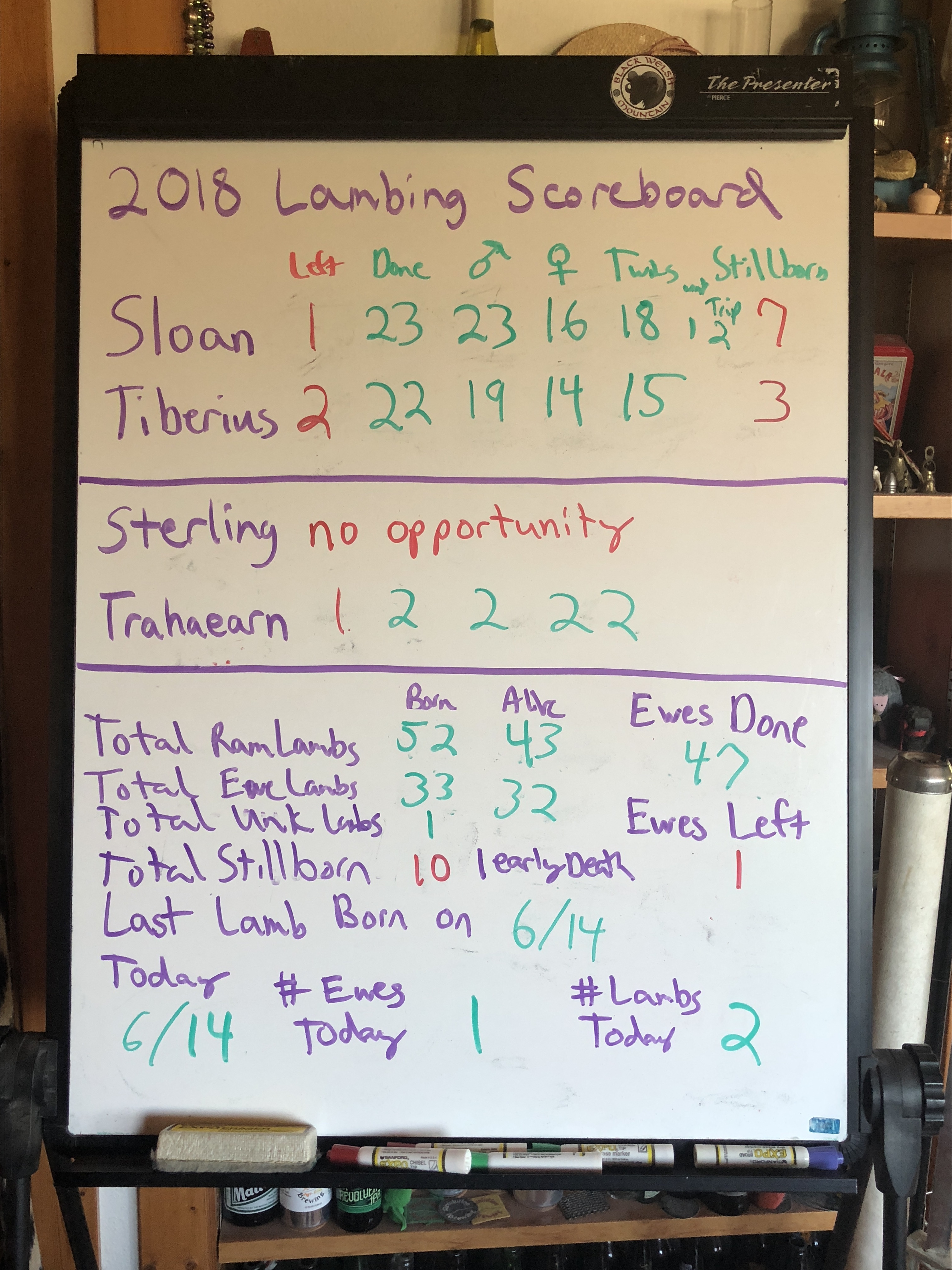 I bought one of these rolls.

Had really low expectations, but was pleasantly surprised by how well they work. Had two up on my walls for weeks now, and they remain in place, completely through static electricity. So can be removed, moved around, put back up.

For someone looking for a simple, non-permanent solution, I would recommend looking at this. See Amazon sells different versions/brands, but they presumably all work the same.

Here’s the lambing scoreboard from this year:

The most techie sheep farmer I’ve come across!
That’s a high loss rate for stillborns, is that the norm?

No very abnormal for us to lose than many as stillborns. In a typical year with 75-85 lambs we’ll lose 2-3. Wierd thing is most were fetal twins to an otherwise normal twin born alive. There are several diseases that can cause that but no definitive diagnosis as the cost to verify was prohibitive and with no vaccine or treatment it didn’t seem worth it other than my own scientific curiosity. Good news is that those ewes are now probably immune.

In fact this year has been a total disaster, we’ve lost 2 adult ewes and 3 adult rams this year as well. 2 rams to urinary calculi, 1 to heat stress from fighting, 1 ewe in a horrible dystocia, had to shoot her to put her out of her misery and then to a PM to discover the cause, 1 to bloat just as the vet was here treating her. Our drought is a huge part of the issue. We had to keep most of the sheep in on dry hay all year, only ewes and lambs got any grass at all and everyone is already back in on hay now. Hay quality was poor at best (we do testing on every batch) and that caused some problems. Given everything I’m actually surprised that the lambs have grown as well as they did, nearly all of them have an average daily gain of .3-.5 lbs /day with no grain supplement. Other than 1 lamb that was an early death (he was twin to a fetal stillborn and weak from birth) all the lambs are very healthy and doing well.

I used to have, the largest I could find. It was 2 by 3m, covering a whole wall of my office. I loved it.

I no longer have the space, so I make do with the Post-It flip-chart sized easel pads. The huge post-its are very useful, and the easel is simple enough to put up and down in my tiny room.

Maybe you can write an app/website and create infrastructure for Fantasy Farming(™), people could select their rams and ewes from various real-life farms, score by number of healthy offspring, etc.

smiling I doubt if it would interesting except to avery few folks but it is fun to think of.