iOS Software Keyboards — What Do You Use

For slide typing, Google & Padkeys. For symbols Unichar. Gboard swift input… Padkeys for the complete keyboard… Google has great acceptance/recognition of near enough swipes and swiftly moving finger swipes. But Padkeys is the one i use because of the layout. Since I discovered UniChar I have more fun with symbols. 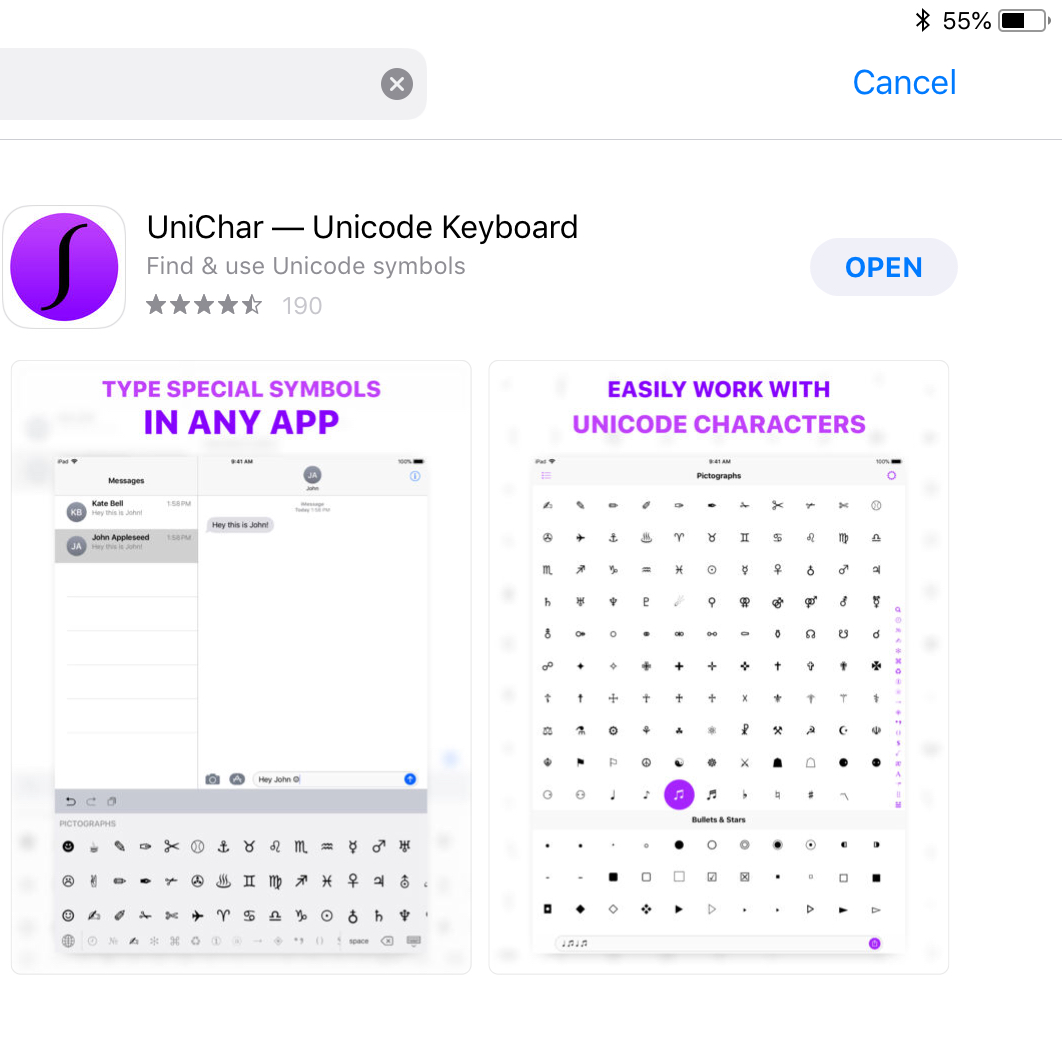 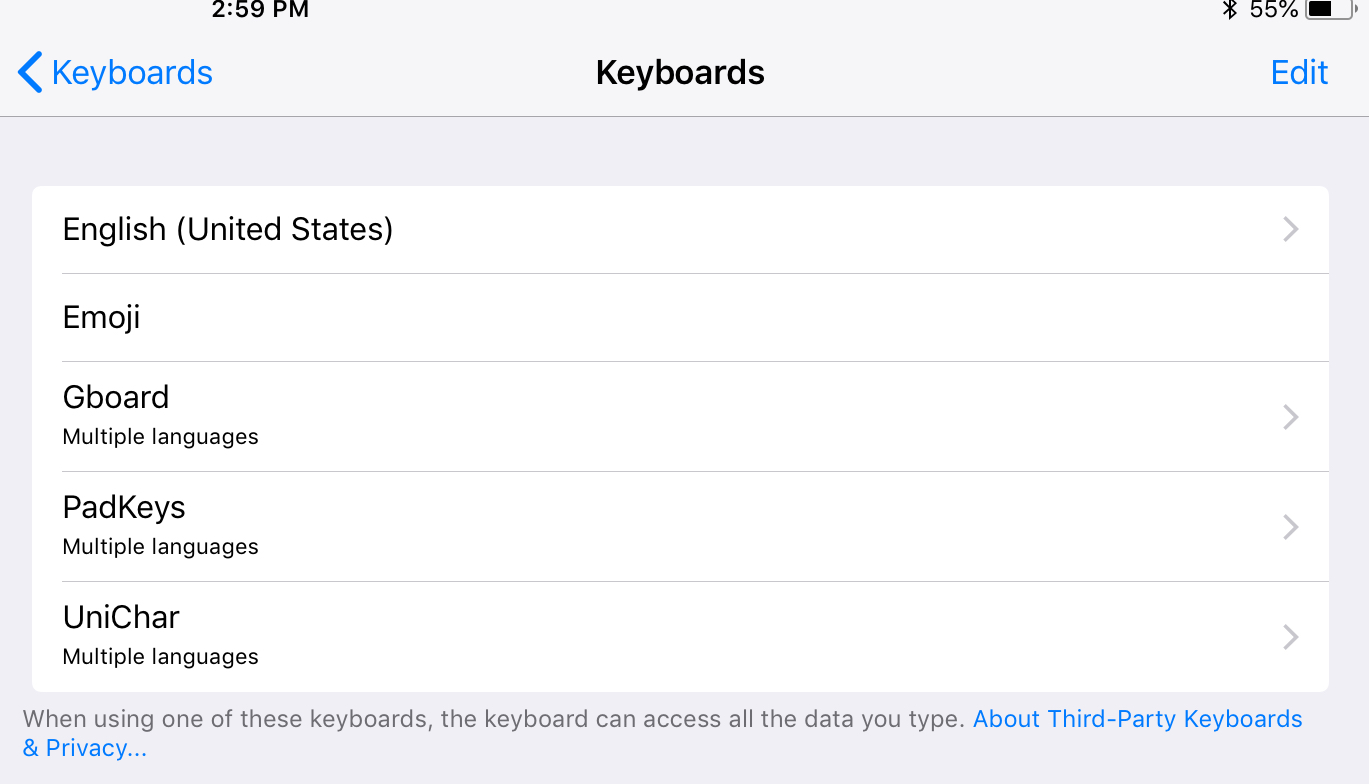 Nintype is customizable out the wazoo, supports two-handed slide typing, and enthusiasts claim they can achieve up to 130 wpm with hit.

I can’t even type 130 wpm on a regular keyboard.

I tried Nintype for a while but I determined I’m just not smart enough for it. 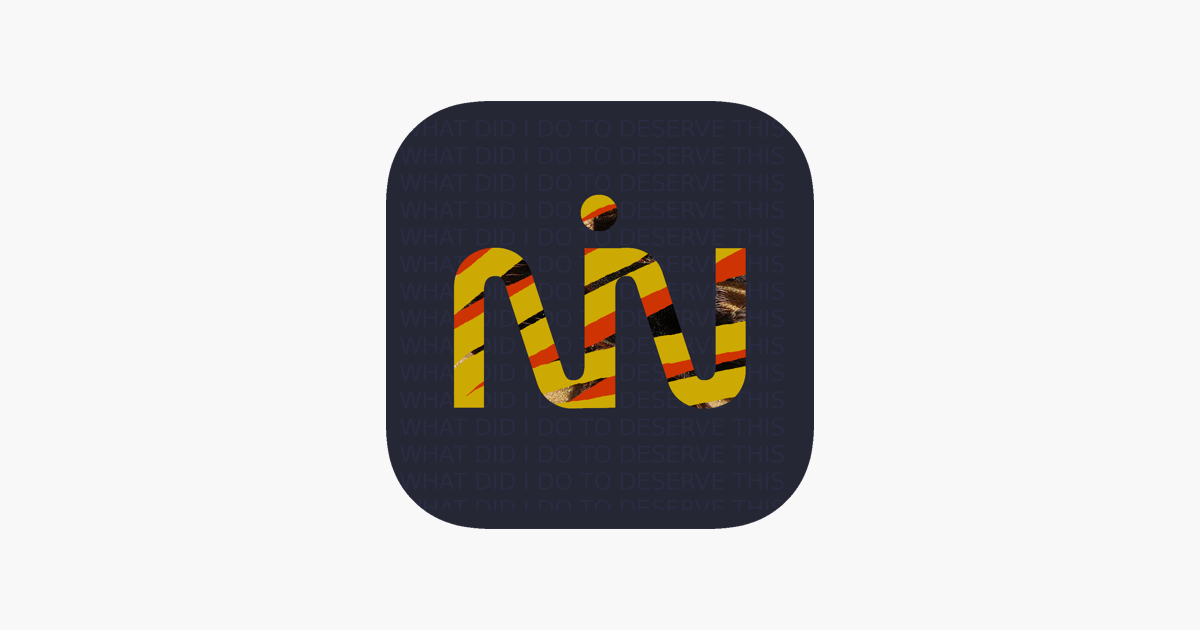 ‎Nintype, as used by over 150k people! ----------------------- Transform your iPhone or iPad into a highly productive device where you can actually type relatively quickly with it - so writing emails, reports and articles are much nicer, because...

i tried nintype on and off for a while. It’s just too buggy for normal use. Gave up and moved to Gboard.

I use Gboard. If Apple introduces Swype typing to its keyboard I would give up Gboard.

i tried nintype on and off for a w

Haven’t tied it. Not updated in a year is concerning.

I’ve been using SwiftKey for a couple years now and really like it. Every now and then, my iPhone will revert to Apple’s default keyboard, but it’s easy enough to get SwiftKey back again. I wish that Apple would come out with their own keyboard for swipe typing.

I use TextExpander keyboard. It provides access to all my shortcuts. I wish they would redo the UI. It’s really ugly and the key to change keyboards is positioned in an odd place.

Just putting this out there for the uninitiated, some keyboards send your keystrokes back to their masters, who can collect personal info, conceivably usernames and passwords, from you. Bitmoji, for example, is one I installed for a few minutes, read the agreement, then deleted.

PadKeys Keyboard does not use the network and sends no data off your device. No cloud, no accounts, no opting in or opting out.

Their privacy statement has more to say, but this is the heart.

I haven’t used Swiftkey recently. As I recall they collect data to make responses more personalized. Haven’t the slighest idea if this is an issue.

John, do you know of “proven” problems? Yes, I agree prudence is a virtue.

I use SwiftKey exclusively.
If I’m typing something in English, after typing I switch to the Grammarly keyboard to run spell check.

I’m using Swype (on my iPhone), but unfortunately Nuance has discontinued it.

Suggestions for a keyboard that offers swiping and auto-complete without full access are welcome!

conceivably usernames and passwords, from you

But data entered into any app or web page has the potential to be exfiltrated. Keyboards just have the ability to persist across apps from different authors.

End of the day. Don’t use an app you don’t trust.

Keyboards are one of my biggest annoyances on iOS.

1.) Have the stock Apple keyboard, since I prefer its dictation to Google’s.
2.) Have Gboard installed, since I prefer its swipe ability, and the built-in GIF/Search functionality is very useful.
Since Gboard expanded its language support, I could drop my 4th keyboard (Path Input) – which supported the 2nd language I frequently type in.

The annoyance is that switching between Gboard’s 1st and 2nd language, also requires a tap on the “Globe” button - so instead of me switching to the next keyboard as intended, I more-often-than-not merely switch languages…

3.) Textexpander’s keyboard. I really wish they would fix it, since typing on it is horrendous. It might be because I don’t do it enough, but always make way more typos in TE, compared to the others.
I really only keep TE around to allow me to quickly insert lengthy email addresses - that the auto-suggest mostly remembers to offer, but still fails to do enough times to warrant my keeping TE available.

I don’t know what they solution is, but wish Apple would come up with an easier way to quickly jump between the keyboards.

The long-tap on the Globe button mostly allows one to see the other keyboards, in order to select them, but doesn’t always work (here’s looking at you, Gboard, which simply offers ‘next keyboard’).
And when it does, the order frequently gets ignored.

It doesn’t happen all the time, but enough for it to be very annoying - when jumping from one to the other, the next keyboard that is supposed to pop up, doesn’t, forcing me to repeat the whole process again (cycle past Gboard) to get to TE, to then go back to the Apple version.
Drives me nuts!

Of course, the ‘simple’ fix would be for the Apple keyboard to offer Swipe, GIF/Google search, dictation, and Emojis, with alternative language support. And snippet expansion, integrated with TE. Easy.

+1 for SwiftKey on iPhone. Have used it for many years. I find it is not as good on iPad though.

My first three smartphones were Android, and real 3rd-party keyboards are one of the few things I miss from Android. I only use the stock keyboard on my iPhone. 3rd party keyboards are hampered by the operating system, and I find it frustrating to cycle through them and switch, so I’ve kept Apple’s keyboard.

On my iPad, I sometimes use the TextExpander custom keyboard where I can assign a key for each snippet to use. This is very handy when grading assignments on my iPad. I can pull up a keyboard that only contains my feedback snippets. I only use it for specific tasks, and I stick mostly with the stock keyboard the rest of the time.

While we’re on the subject, when did this happen? So annoying, blah blah 12 [space] "I deleted all that stuff you typed. You’re welcome. "

@JohnAtl Wooot? Where is that button? Cannot see it this side?

It’s the regular keyboard when switched to numeric, as far as I can tell. iOS 11.4.1
I do have Copied installed, but it shouldn’t have altered the stock keyboard.
Could it be changed in the Discourse app?

@JohnAtl Nope - cannot get it to appear. Also running iOS 11.4.1, iPhone 8+.
Nothing under the numeric, landscape or portrait, or in the Discourse app.
Very strange!

is the backspace/delete button, instead of the ‘enter/l/m’ button…

This is on my iPad Pro, so that’s probably the difference.