I was curious if anyone keeps all their photos on their iPhone or do they empty their phone out periodically.

My workflow is using an app on my phone and Mac called PhotoSync, all the photos and videos get sent to my computer.

From there, Hazel runs a bunch of rules for sorting and naming (screenshots, photos, videos)

Once Hazel is done doing it’s thing, all the photos get transferred to my Synology.

In case anyone is wondering, my reason for using PhotoSync is that after many tests with Apple Photos, Dropbox, Google Photos, and any other app that claims to backup your photos, there was always issues with the wrong metadata after transfer.

After transferring, I’m always in debate whether to keep the photos still or delete them. The cool thing about PhotoSync is that it recognizes whether it’s uploaded that photo before or not, which is why so far, I keep the photos on my phone after transferring. Plus, it’s nice to just flip through randomly and show people my kids and their antics lol.

I use PhotoSync and a very similar workflow. No problems or reasons to change.

I use iCloud to sync photos to my iMac at home. From there I have two backups. One local and one offsite using backblaze.

Similar setup but using OS’s image capture instead of PhotoSync.

Got very curious with it though. Does it sync over wifi? That’s one of my struggles with Image Capture.

The iOS Synology app has a photo upload too but it’s not very reliable from my experience.

I have been using DAM. (Digital Asset Managment) tools for many years now. IPhoto -> Aperture -> Lightroom -> Apple Photos. I am testing Lightroom CC right now but the performance on device is terrible… Mac and IPad that is.

Apple Photos with iCloud Photo Library has been “perfect” for most of my needs. I have around 47000 photos and 1000 videos in the system. Apple has been improving the system for several years and it works well for me. The photos get synced to my iMac and backed up locally to time machine and remotely to Backblaze. A couple of times a year I update a 2.5in drive and keep a copy in my safe deposit box.

I have a lot of wishes for Apple to improve the software! I have not had any meta data loss.

Does it sync over wifi?

yes, generally flawlessly. I use wifi direct to my mac as I had some issues a few years back with videos going to Dropbox. I believe the issue has been fixed but that got me in the local network sync habit.

Yes it does works very well. Also syncs via geofencing as well, which is cool.

I rely on Dropbox and Google Photos. I have the added responsibility and complexity of being Photo Master for my family of 4 and all the photos they take on their iPhones.

What I do is install Dropbox (DB) and Google Photos (GP) on everyone’s iPhones and set up shared “Camera Upload” DB folders that are added/“shared” to my DB account. Every few weeks or after a big event I ask my wife and kids to sync DB and GP. GP backs up all the photos. DB syncs the actual photo files so I can access them via my iMac. From there, Hazel, and yours truly, organize them in my Master archive, which is then also backed up to a remote disc via Hazel. There is some manual intervention but there almost has to be with all the variables needed to manage photos three days.

I have been using DAM. (Digital Asset Managment) tools for many years now. IPhoto -> Aperture -> Lightroom -> Apple Photos. I am testing Lightroom CC right now but the performance on device is terrible… Mac and IPad that is.

I’m kinda torn. Have all my photos in Lightroom but have version 5 or whatever before CC and don’t use it like I once did. Photos for iOS photos works great for me but it’s weird being in two systems.

You really need to be in one system. I have a master set in Apple Photos. I have a test library in Lightroom CC. I am not happy with CC yet. There are just so many things i am used to from Lightroom Classic. (Or Apple Aperture). Anyway I will stop LR CC pretty soon as it is doing me no good for now.

I just carry a MacBook Pro with my iPad when I need the features that are not in the iPad version. With. IOS 12 I can now import RAW photos from my Olympus cameras… I am getting happier.

Great minds think alike @FrMichaelFanous . You process sounds much like mine.

To help correct metadata issues I have a couple of Hazel Rules that identifies images requiring a Geotag and allows for resetting of capture dates (ie adding actual capture date to images that were subsequently scanned).

All photos also have keywords added via Hazel that records the subject category (Family, Travel, Event etc) along withe other details such as the trip location, event details or the name of the people in the photo. The Keywords used also determine the folder structure the files are automatically filed away into.

It is tempting to just leave photo management to the Photos App but I much prefer to have a curated catalogue of images and videos. 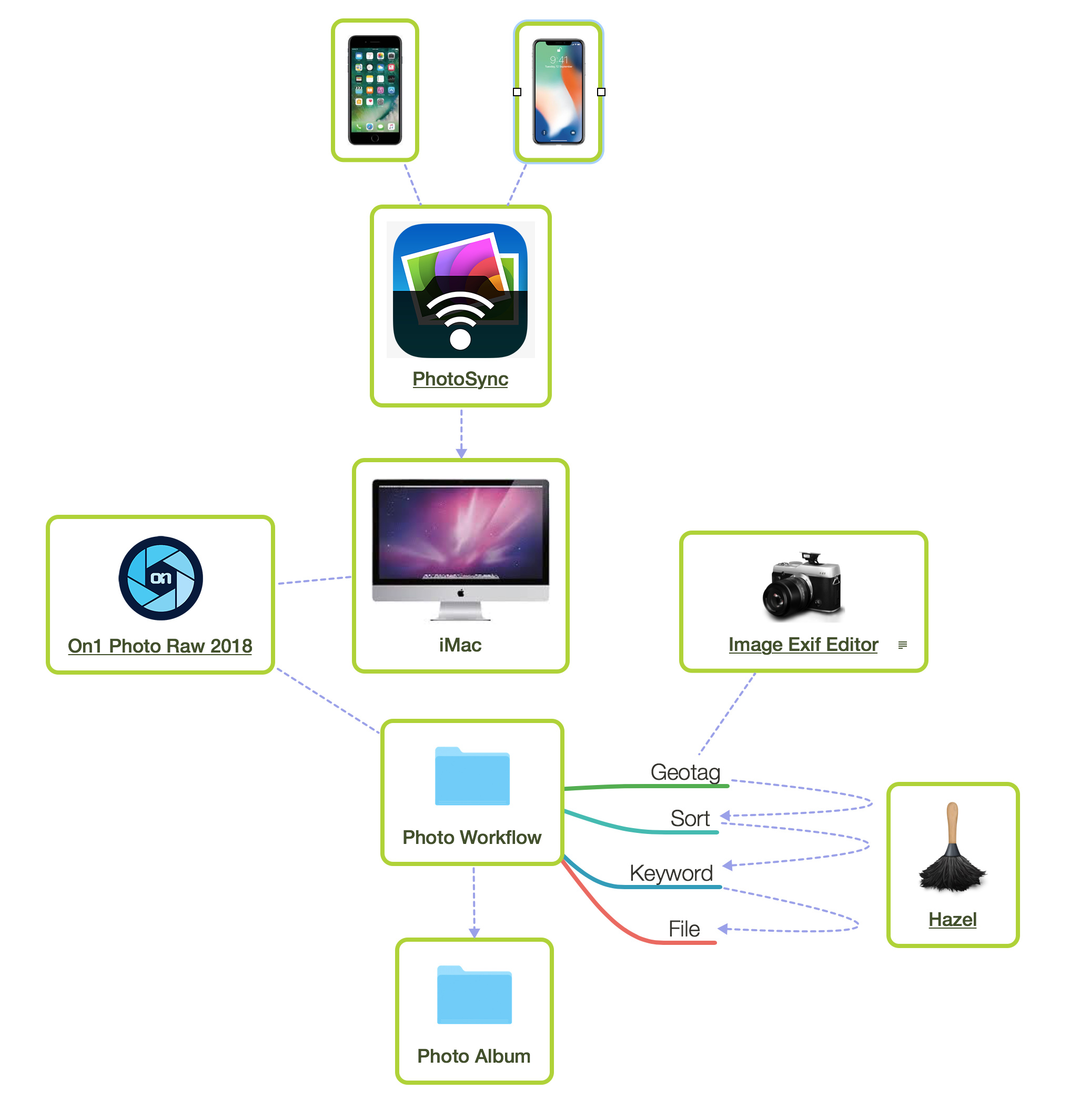 Could you expand on the Hazel bit? Thanks!

See the links I posted here – this was the foundation for my approach:

I built a photo workflow based on this link, which is very helpful even if that’s not your goal: http://www.theinstructional.com/guides/organise-dropbox-camera-uploads-with-hazel Modified in part to include exiftool as discussed here: https://www.noodlesoft.com/forums/viewtopic.php?t=3331&f=3

It is tempting to just leave photo management to the Photos App but I much prefer to have a curated catalogue of images and videos.

You really need to be in one system. I have a master set in Apple Photos. I have a test library in Lightroom CC. I am not happy with CC yet. There are just so many things i am used to from Lightroom Classic. (Or Apple Aperture). Anyway I will stop LR CC pretty soon as it is doing me no good for now.

I just carry a MacBook Pro with my iPad when I need the features that are not in the iPad version. With. IOS 12 I can now import RAW photos from my Olympus cameras… I am getting happier.

Good point. I need to figure out where to go from here. I used to use Aperture and then switched to Lightroom. That was a great switch as Apple iPhoto at the time wasn’t able to handle everything. Given I store my 700GB of photos on an external drive I’m unsure if Apple Photos can do or handle that. Maybe I’ll ask in another thread about how people do that.

I empty my phone out at least monthly, otherwise I’d run out of space

I use PhotoSync as well. My photo Workflow is:

Transfer all photos to iMac using Photosync
in LightRoom import all new photos from the PhotoSync folder into the catalog, renaming them according to my LR presets, adding all my LR workflow keywords, the copyright data and source.
Then in my LR workflow I do things like add the remaining keywords, verify other EXIF data and do all my editing and removing bad pictures there.

Hi, I will write up my Workflow and post it in the next week or so along with the Hazel Rules.

Has anyone noticed PhotoSync failing to flag some photos as new? I haven’t had time to troubleshoot properly but it seems like some photos shot or edited in third party apps are no seen as new & thus require manual import.

I tend to use Dropbox to copy my photos off my devices, then use an auto-import to sort, change and edit in Lightroom CC (this includes photos taken with other cameras).

THEN (for non ‘arty’ photos), I export to a relevant folder in Dropbox (all done on a Mac) and sync’d to my Synology (and Blackblaze/Amazon Prime).

I export due to taking too many photos! And use the Synology/Amazon as I can easily share so my wife can easily see them, and they can be shown on our AppleTVs etc.

It works, I miss ‘Picasa’ as a non-destructive photo album application (that simply scanned for new photos) - I would like to try Apple Photos, but I would like it to scan for new photos in a certain folder AND not to touch the filing and naming… (does it do that now!??)

Such great ideas. I’m giving PhotoSync a go this weekend.

I have been using Image Capture but it needs wired connection to a Mac and renamed files on the Mac are downloaded again from the iPhone (I like to keep some photos on my devices).

I’ve also stopped doing edits on my iPhone when I’m not sharing those photos…and that is because of the AAC format.

How are you all dealling with the .AAC files on the Mac? I don’t use Photos app on my Mac and that seems to be the only app that reads these. This is something I wish Apple would standardise!!!..or am I missing something?