Hey everyone. I have a 2020 Macbook Air. I’ve been doing more power intensive tasks like video editing and uploading and I was wondering if the M1 machine would be a worthy upgrade. My rendering times are pretty long. I end up having to edit videos that are about an hour long and it is taking over an hour to render them. Would the M1 Air or Pro speed this up in a significant enough way to justify the upgrade? Thanks!

The Internet consensus seems to be “yes” as far as whether it would speed up your video rendering dramatically, but obviously only you could decide whether it’s “worth it”. Any idea how much you can get for your 2020, and which M1 machine you’d be wanting to get?

Also, do you know 100% that all of your software is compatible with the M1?

I don’t know about the compatibility issue yet on the software. I think I can probably sell my 2020 MacBook Air with i5 and 16gb ram for about 900. It’s only a few months old. It would depend on which M1 machine I went for but there would only be a few hundred difference most likely.

What software are you using the render video?

I have a 2020 Macbook Air. I’ve been doing more power intensive tasks like video editing and uploading and I was wondering if the M1 machine would be a worthy upgrade.

All I can tell you is that I traded in my (2019) 16" MacBook Pro with 16GB of RAM, and replaced it with a MacBook Air with 16GB of RAM and it feels more like I switched from a computer that was about 6 years old.

I read all (well, most) of the reviews and benchmarks that told me this would be a faster computer, but I was still surprised to experience it myself.

I would see what Apple would give you for a trade-in. You can find that out without having to commit to anything. If they’re giving you a decent amount, you will have some time after the new one arrives to use it before you have to send in the old one. If it doesn’t meet your expectations, call them up and tell them you want to cancel the trade-in.

Only downside is that, last I looked, shipping times for the new MacBook Air with 16GB of RAM was approaching the end of January.

… I’ve been doing more power intensive tasks like video editing and uploading and I was wondering if the M1 machine would be a worthy upgrade. …

I didn’t do any scientific benchmarking, just some quick tests: compared to my prior MBP, the M1 is a significant upgrade when using Final Cut. Never before the bars in the activity monitor or whatever the queue in FCP is called filled so quick.

Honestly, I’m using iMovie. I’d like to eventually get into Final Cut but right now, iMovie does everything I need it to for now. I’m a pastor so this year has changed how I have to do something things. Trying to make sure I make adjustments for whatever comes next. I have a couple of side gigs as well and I will use the computer for some of that as well.

I can’t remember if you use Logos Bible Software or not. But if so, does it work well with the M1?

iMovie is totally fine! No judgment. I was just asking to be able to confirm that yes, your renders will significantly speed up.

According to this video, yes. 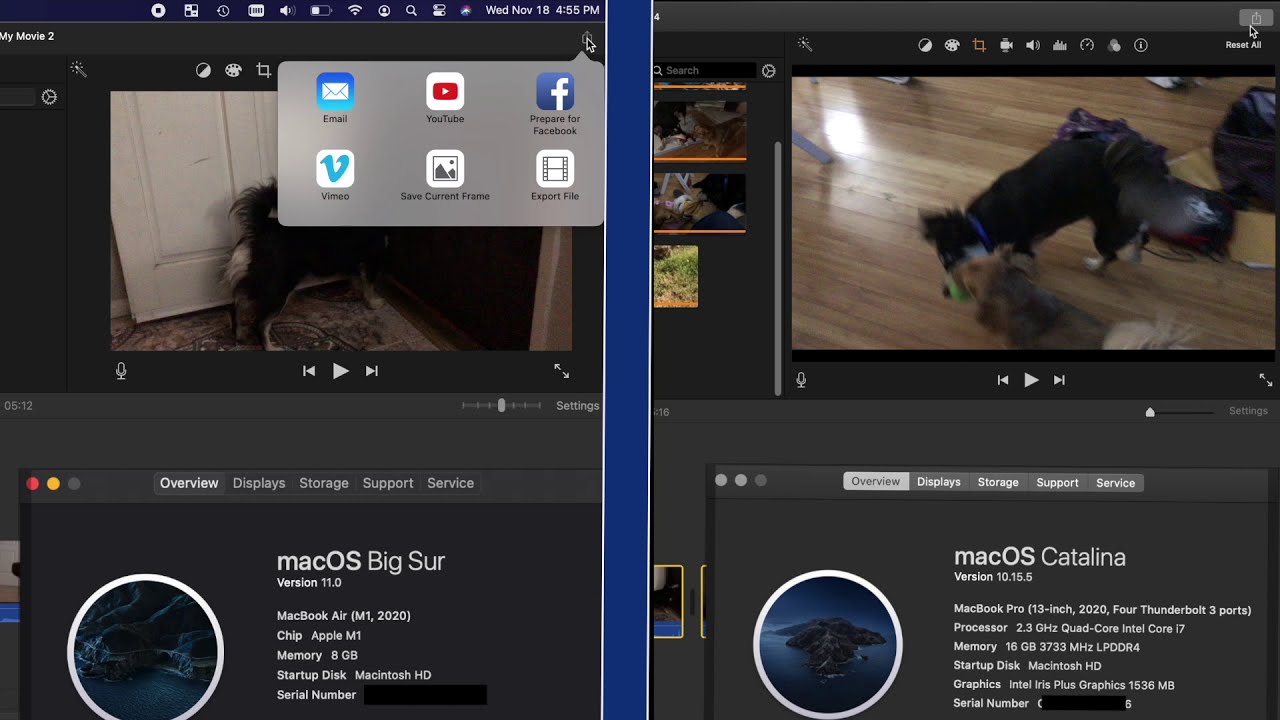 I can’t remember if you use Logos Bible Software or not.

I do but haven’t installed it yet – I’ve been using https://app.logos.com because Logos is such a huge app and was historically slow, even on new hardware.

However, I am curious now, so I’m installing it and will report back here and also to https://doesitarm.com.

It seems to work fine. It’s still Intel-only, and LogosIndexer is still murder on the CPU when it is doing its first setup, but after that it seems to work perfectly as far as I can tell.

Thanks! I appreciate you checking that out for me.

All I can tell you is that I traded in my (2019) 16" MacBook Pro with 16GB of RAM, and replaced it with a MacBook Air with 16GB of RAM and it feels more like I switched from a computer that was about 6 years old.

Holy cow! Is it really that good? You make me want to trade in my 16" MacBook Pro! It also has 1TB of storage and 16GB of RAM and the 5500M graphics with 8GB of video memory.

Holy cow! Is it really that good?

Again, it is that kind of switch for me but I can’t promise it will be like that for everyone.

When I went from a MacBook Air to the 16" MacBook Pro, it seemed pretty much like the same computer, except that video stuff (think ‘Handbrake’) was a lot faster. But otherwise, it felt the same.

When I use my 2012 Mac mini, it still works but there are times when it slow or unresponsive and I realize that I’m spending a lot of time waiting for it to catch up.

Someone commented a few years ago that there’s no “spinning pinwheel” on iOS to tell you to wait, because iOS is designed for you not to have to wait. Working with the M1 feels more like working on an iPad in terms of everything keeping up and going as fast as I can go.

Sure, I can make it to things that will take a few minutes to complete (read: HandBrake) but most of the stuff that I do is done as fast as I can do it.

Here’s an example that may help.

I do this every single day, so I have a Stream Deck key which triggers a Keyboard Maestro macro for this. On my 2019 16" MacBook Pro (8 core i9, I think), I had to add pauses in-between most of the steps because sometimes Keyboard Maestro worked faster than macOS, and if any of the steps get missed, I have to cancel the whole thing and start over.

I was very pleased with how this performed on the MacBook Pro. It was certainly faster than I could do it by hand, and it didn’t seem all that slow.

But running it on the M1 MacBook Air is so much faster.

That’s not something I can really benchmark. We’re probably talking about fractions of a second and people would look at them and think “Well, that difference is too small to matter.” But as something I do every single day and am used to watching how it goes, you’d think the MacBook Pro was a much older system.

To me, the real reasons that I wanted the M1 have more to do with wanting to move back to a 13" (it’s just so much nicer when sitting on the couch) and no Touch Bar (sorry David, I really tried to like it and make it work, but I never liked it), and no fans.

Touch ID on the M1 is faster. Did I ever think Touch ID on the previous Macs was slow? Not really. It took however long it took. I had the same thought with Touch ID v1 on the iPhone, but when Touch ID v2 came out on the iPhone I think everyone who had used it went “Oh yeah this is definitely faster.”

Now when I look back on it, not only does Touch ID on the MacBook Pro seem slow, but the computer was almost always warm-to-hot. The M1 is cool to the touch, and the Touch ID sensor is faster.

I guess that video of Craig Federighi watching the M1 MacBook wake from sleep (as silly as it seemed at the time) really made the same point. Were people really bothered by how long their MacBooks took to wake from sleep? I never really noticed it. I lifted the lid, the screen came on, I put my finger on the Touch ID sensor.

But now, when you lift the lid and the screen is already on and ready to go? It feels like things are happening much faster.

All of which is why I made the comparison to switching from an old computer. It’s not as if the MacBook Pro felt slow, but the M1 makes it feel slow in hindsight. Would you feel it was as big of a difference as what it feels like to me? I’m not sure. Maybe these things wouldn’t feel that noticeable and maybe there aren’t similar things that you do that would feel much faster. Again, these aren’t benchmark-able comparisons where something takes 90 seconds and something else takes 20 seconds. This is everything just feels a little bit faster and so it never feels like I’m waiting for the computer unless I’m doing something I know will be intensive (Handbrake).

I hope that’s useful to anyone who might be thinking about upgrading.

I have a high spec 2020 MacBook Pro 16 inch (2.4ghz, 8-core i9, 32gb 2TB SSD, AMD 5500M 8GB) and I use it with a 49 inch LG Monitor. I bought a 13 inch MacBook Pro M1 but unfortunately it will not drive the monitor. I can get the resolution required using Switchres but the quality is terrible so at the moment, I have went back to the 16 inch and I am using the 13 inch MBP M1 as a portable option.
Has anyone else had problems using an M1 with a monitor?

Not sure where to put this, but here seemed a good spot…

Last week I mailed my 16” MacBook Pro for Trade-In. I was planning to use the $1600 they said it was worth to pay for my M1 MacBook.

It was received on Monday.

Today I received this email:

Subject: Your trade-in is a success.

Good news. Your trade-in is complete.

Thanks for using Apple Trade In. Everything checks out, so there’s nothing more you need to do.

I nearly had a heart attack before I realized that it also said:

Then I realized this is the trade-in for my iPhone which I sent in weeks ago and hadn’t even realized Apple had never told me was “All Set” but I assumed it was “All Set”.

But now I am wondering… what would happen if Apple took a month to tell me that my 16" MacBook Pro isn’t worth as much as they originally said? It’s going to be far too late to return the M1 MacBook… (not that I would!)

Let’s hope I don’t find out.

Sadly they only offered me $180 once they saw my 2016 MBP after offering $510 initially. I’ll probably get it back rather than take the lowball.