The HUE Motion Sensors are 20% off right now.

Multiple switches the problem? Do it yourself? Turn off power to the swtiches. Take off the coverplate and take a look. (WeMo switch perspctive) Can you spot a neutral wire? Does the box look big enough? (Some plastic boxes seem smaller than older metal style …getting the wire-nuts & wires to fit in one plastic box was a pain.) Can you get a cover plate that matches your switches… I assume they make four gang cover plates.

Have not cleaned up this switch and plug but it works well. 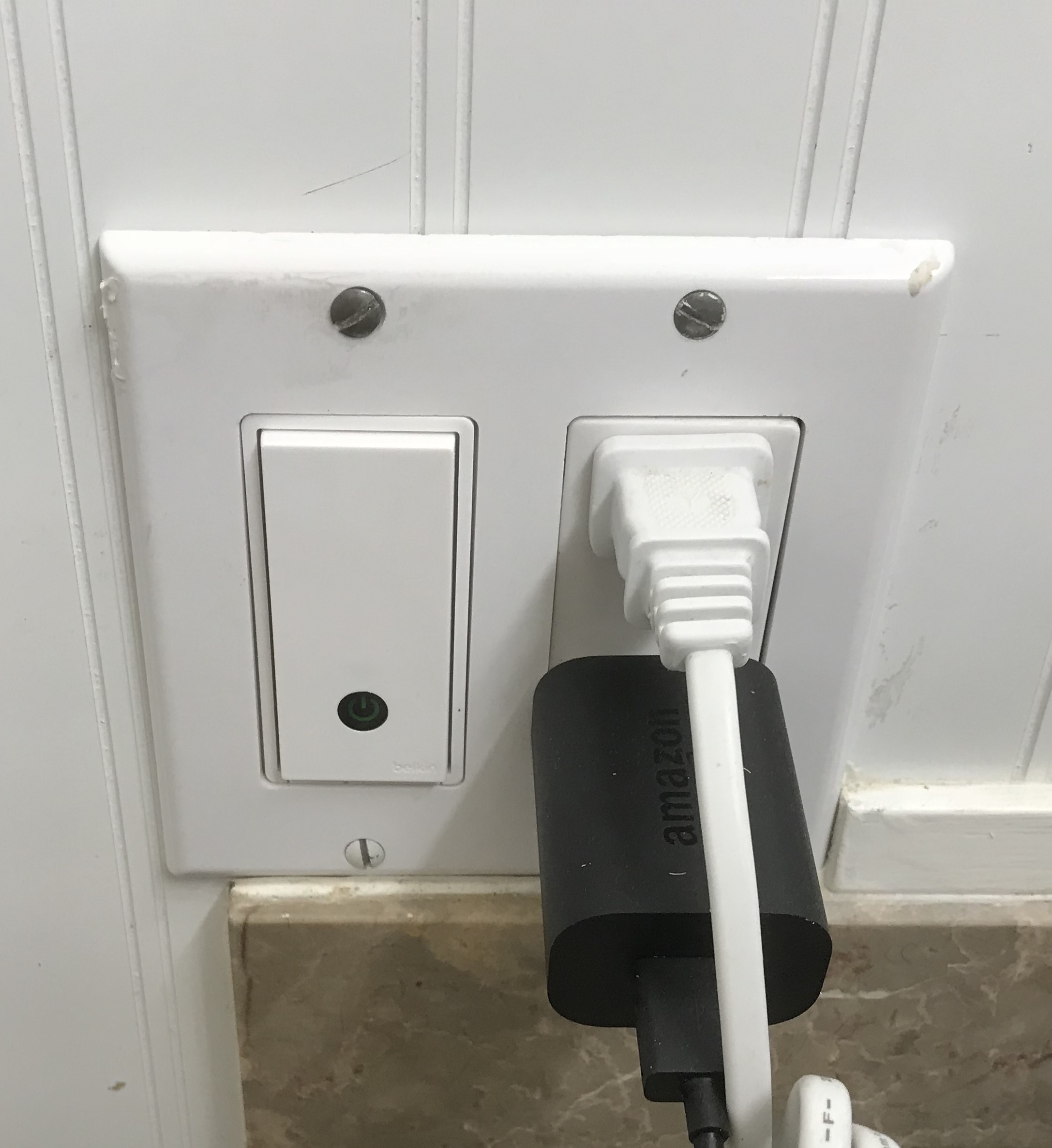 My Amateur’s Perspective
I hear comments about 15 minute installs. But, I have stared at single switch boxes for that long. Even though proper tools were at hand, new cover plates … and/or were 40 minutes away.

One thing I have been playing with to augment Homekit is Homebridge. I have a homebridge server running on my Macmini (running as a headless server, so it is always on) and I am getting a homebridge server up and running on a Raspberry PI. One thing that Homebridge allows me to do is send notifications from device events. For example: I have an Home isp8 SmartPlug. When the outlet changes state (connected to a lamp most of the year and runs the Christmas tree during the holidays), I receive a push notification of the change.

Also, many HomeKit devices (example the Elgato Eve Room) do not publish themselves as sensors. So I cannot do automation related events around them. However, with Homebridge, I have a “software” motion sensor that trips periodically and can serve as an initiating event for Homekit automation events. There are a ton of homebridge services available and you can even publish your own.

I love the idea of putting a couple of fans, coffee, etc, on home kit enabled power plugs. but, like David, I live with someone else who doesn’t want to tell Siri to shut off the fan. are there any buttons or switches (that don’t require wiring into the wall) like the Hue switch/remote that would work for power?

are there any buttons or switches (that don’t require wiring into the wall) like the Hue switch/remote that would work for power?

I’m using the Logitech Pop switches to control some of my Hue lights.

The NanoLeaf Remote may be a good solution. It’s the same price as the Eve Button but you could configure side 1 to put the coffee machine on, side 2 switches on the fans, etc. Gives you a few more options than a single button.

That’s assuming the other half is happier to interact with a glowing dodecahedron over Siri of course.

Here’s what get me started with HomeKit:

I saw this idea on YouTube and wanted to recreate it because I thought it’d be extremely useful:

I managed to do this by attaching a Hue light strip to the underside of the bed frame, and then placing a motion detector low to the ground where it was picked up by the whole room. On when motion detected with a lovely orange diffuse glow, off a minute after motion stops. Works brilliantly, and I’m happy to report that it’s just as terrific a solution as I’d hoped.

Of course, now that I have the hue bridge and setup in place, I’ve gone sorta crazy with the lights, but it’s fun to have everything just kinda work on its own.

I’m using the Logitech Pop switches to control some of my Hue lights.

Thanks! I guess I should ask a more basic question: do you need a HomeKit hub, like an Apple TV or a HomePod to use a button like the Logitech Pop or the NanoLeaf Remote (or the Eve) to control other HomeKit devices?

If you buy the bundle it comes with its own bridge. It can also control things like Sonos - we have a button next to our front door and the “one tap” setting turns off all the lights and the Sonos which is really handy!

They will work without a AppleTV or HomePod but only when your iPhone is in the house, and you won’t be able to control the HomeKit devices whilst out of the house. You can use an iPad as a Home hub, again assuming it stays in the house.

I’ve been using home automation since my first foray into X10 in 1985 with a serial port PC interface. As the tech has progressed, it has become way more reliable and user-friendly. The basic automation functionality (turn on/off/dim, scenes, timing and motion) was there even back then. I still have a bunch of X10 modules stored with the Christmas lights and break them out every year along with the wireless remote to control it all. MPU # 409 “Holiday Tech” motivated me to explore modernizing the X10 stuff. I got a Raspberry Pi and set up Homebridge and was reminded why I had cut way back on X10 stuff. The over-the-AC-wiring signals for X10 can easily get lost so the X10 modules were sporadic, even with the phase bridge I have that connects both AC legs (phases) of the breaker panel. Setting up repeats of the on or off commands in Homebridge might help but I decided it wasn’t worth it. I will probably just configure the Pi as a NAS instead. In automating our home, like @MacSparky, I need a system that accommodates family who will turn on / off switches. So I like a mix of Alexa / Homekit stuff, X10 at the fringes and dedicated (non-connected) automation to make our house work. High use area lighting has automation with a physical switch to press and some timing scenarios (no sensors yet). The outside lights have a dedicated switch I got a while ago that you set once with lattitude and time zone and it tracks sunset/sunrise on its own for years through power outages. The furnace thermostat is a pretty basic 7-day programmable unit since our main heating source is a wood pellet stove. I laughed so hard at the “turn David off” bit in # 445 that I just ordered a hue starter kit for the bedroom lamps so my wife can turn me off too.

They will work without a AppleTV or HomePod but only when your iPhone is in the house, and you won’t be able to control the HomeKit devices whilst out of the house. You can use an iPad as a Home hub, again assuming it stays in the house.

That’s what i feared, and of course why didn’t i think of that. Okay, i’m going to sit out on the HK automation for a little bit more!

The episode was great and I gained a lot out of it! Good recommendations and ideas - thanks to @MacSparky and @katiefloyd!

However, there was one thing that stroke my attention more than anything else. At one stage Katie says something like “I live a Homekit compatible lifestyle”
That is an interesting statement - I am dealing a lot with adapting technology to human needs and interactions and the last we accept is to require humans to adapt to technology. Of course, we are not always successful doing so, however, specifically when it comes to applications interacting directly into human daily life, technology should be adapted to humans and not vice versa.

This was just a phrase but an interesting question came with it, imho: should we adapt to technology - or are we forced to?

Hi, enjoyed the episode, David mentioned a solar powered light he was using outside, any chance of a link please?

This was just a phrase but an interesting question came with it, imho: should we adapt to technology - or are we forced to?

Great point. The issue really is the problem that all the big tech companies want their own home automation sandboxes. We should have described this on the show but it’s an issue. I think @katiefloyd and I ultimately decided that since we’re already all in with Apple, we should work with (and cover) Apple’s home automation strategy too.

The trigger/ condition I want is “Someone is home” so I can trigger living room lights before sunset only if someone is home.

I’ve found mixed results with these conditions. I have a lamp on an Evo Switch, with a rule set to turn on at sunset when no one is home.

For instance, a few nights ago, no one was home and the light never turned on (leaving my dog in the dark). I checked to ensure to rule was still active and all.

Selling a home with custom automation

I have started dabbling in home automation and started to wonder about how I would deal with it when I come to sell the house. If I show the house to prospective buyers then they would assume the home automation they see comes with the house (all of the hue bulbs, lutron switches, thermostats, etc). Upon the new owners taking possession they would need the Homekit (or other) codes to either set up the devices again or take over the existing account. Or should one keep the old switches, thermostats, etc. and replace the home automation devices before showing the house to prospective buyers so they can be reinstalled in the new residence? The answer will likely differ with the individual but it would be interesting to hear Katie’s and David’s thoughts as they have both the legal and technological aspects well covered.

I remembwr on one episode Katie said she removed her home automation before showing and selling her last house - and it made her realise how much she had come to depend on it!

Thanks Rosemary/ Now that you mention it I do recall that comment and is likely her preference to move the devices with her.

On the show, there was the wish mentioned that IFTTT/third party triggers could be tied into HomeKit actions.

For those who are automation-savvier than I (and who actually own smart home gear), is there a way to set up IFTTT to hit a KM “Web trigger” and have KM do something in the Home app?