The nominated March 2022 software of the month is Brett Terpstra’s Bunch:

What’s Bunch all about?

From the banner of the Bunch site

Bunch is a macOS automation tool that takes a folder of plain text files containing lists of apps and commands to launch and provides an easy-to-use menu for triggering them.

Its intuitive syntax makes it easy to get started, and its array of features allows you to automate everything you need to work smarter and faster. Build “contexts” of apps and settings for your different modes of work and play, and switch between them with a couple of keystrokes.

Bunch lives in the menubar of a macOS (not for Mobile devices, AFAIK). It executes commands found in a plain text file. Here’s an example of Bunch’s syntax, from the Bunch Samples

How are you using Bunch?

Do you have any favorite “Bunches” that you can share?

Has Bunch operated the way you expected – or what challenges have you had?

I use Bunch, and I currently have seven bunches defined. Although I doubt I’m a “power user”. And I’m sure others will comment on some of the more advanced features.

My current set up consists or four monitors and ten spaces and I use Bunch, along with other tools and settings, to set up applications, folders, and files across these monitors and spaces.

One of my hobbies is photography and I have two bunches related to that. One for image
ingestion and another for processing.

Here is my Photo Ingest Bunch:

Here‘s what is going on:

I needed to experiment with the order things happen and the delays added to get everything to open in the correct space. But now it works for me.

I’m also learning SQL, and I have a Bunch that launches SQL tools and online references and tutorials. I like that I can easily change the items that open by simply editing a text file. For example, once a tutorial is completed I can replace it with a new URL (or comment the line if I want to save the reference).

There is extensive documentation and the developer, Brett Terpstra, is active in the Forums and has quickly responded to any questions I have had.

I find Bunch a useful tool for how I use my Mac. And look forward to seeing how others are using it.

Thank you @MevetS – that’s an interesting use case.

I have a very simple Bunch that merely launches 5 apps, which I use after logging into the MBP. The Bunch hangs with spinning beachball every time I use it. Even if I wait 5 minutes after login to attempt the bunch. It’s just easier to click the five icons in the Dock and away I go.

Have you or anyone encountered this behavior? It has stopped me from experimenting further with Bunch.

I did have the spinning beach back when I first started using Bunch. But I do not remember what the issue was or how I fixed it.

One thing you could try, and may already have, is to comment out the apps and turn them on one at a time to see if there is a specific app that causes the issue.

I do know that in System Preferences my settings for Bunch are:

And in the Troubleshooting section of the Bunch docs it lists a few apps that do not work with Bunch. And there is a log you can check to see what may be causing the issue.

Good luck if you decide to try debugging the issue.

hi @anon41602260 thanks for leading this month’s discussion.

From a use case perspective, just wondering how is the experience using Bunch versus shortcuts. I do not have experience on both. Just thinking whether I can do what Bunch is designed to do with nested shortcuts, may be not as elegant

From a use case perspective, just wondering how is the experience using Bunch versus shortcuts.

Interesting question. I suspect that there are multiple ways to accomplish Context setup on a Mac, some methods easier than others based on the individual use cases and one’s familiarity with the tools.

I’ve not had a reason to use Shortcuts on my Mac, but this sounds like a fun exercise and a good excuse to try it out.

Can anyone suggest a good reference for getting started with Shortcuts on the Mac? Most of what I’ve found is targeted at iOS (although if it is the ‘same’ across platforms that might be ok?). Thanks in advance.

Ok, so I went ahead and created a Shortcut that is equivalent to my Photo Ingest Bunch.

It is not clear how to copy/paste a shortcut (is that possible?) so here is a screen shot: 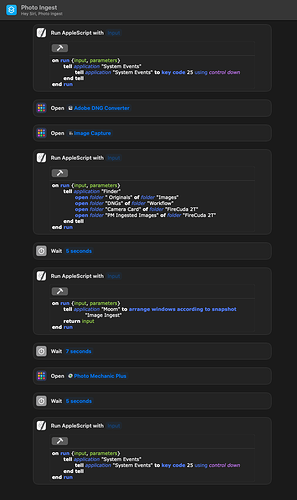 I find the Bunch easier to read and follow what is being done. This is of course a personal preference and is in part due to my level of familiarity with each tool. I’ve been suing Bunch for some time now. This is my first Shortcut.

And I would appreciate if anyone can tell me the Shortcut commands to:

Note also that the first run of a Bunch launches the applications. The second run quits those applications (this can be overwritten). I do not see how to do that with one Shortcut.

For those familiar with ScreencastsOnline, the weeks tutorial is on Bunch. A great co incidence to watch a video of it. 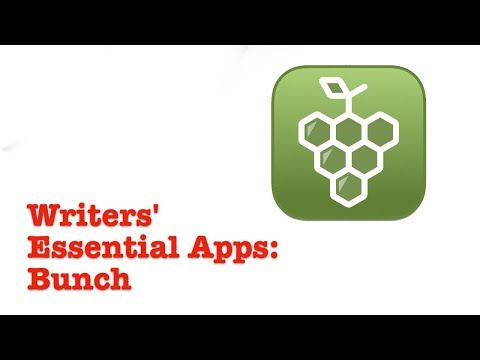