Excellent. Thank you so much for sharing this!

I’m still trying to figure this workflow out. Bear with me, I’m still new to using and understanding Workflow. I run the workflow on my iPad, (using blank option). I type in the title, it opens up in Drafts. I write 2 sentences in the Discusson section, and then I add some tasks using the shortcut key on the iPad that inserts [ ] before each action item.

I then tap on Services from Drafts (new note in Evernote). A new note is created but everything is crammed into like 2-3 lines of text, it’s no longer divided as nicely as it what in Drafts.

Also, couldn’t see where the action items went after that. Didn’t see them in Reminders.

The step where you may be getting off track is the Drafts Action. When you are finished typing your notes, ie the meeting is finished, choose the action “Meeting Finish” from your Drafts Actions. This is the Action linked in my original post.

It is that action that formats the note for Evernote, parses the lines marked as to-dos and sends to Reminders. I hope this helps — jay

I don’t see that option in any of my Drafts actions. Do I need to be on the premium version of Drafts?

You need to install his action (from the link above), which can be done with the free version of Drafts

@jayelevy @RosemaryOrchard So I installed the Draft action, but when I run it, this happens (after authorizing Evernote)

I then noticed after the beep and error, the title starts repeating itself in the Drafts note.

Checked the log, it says notebook not found. I tried adding a new notebook called Working and .Working still getting the same error

Go to the Trash tab and find the last draft you processed using the Meeting Finish action.

Tap on the draft to open it and then tap on the ‘i’ at the top to see detail about the draft.

Tap on the “… action performed” entry in the ACTION LOG

Tap on the Action to see the RESULT. What displays in MESSAGES?

But I have added the notebook to my Evernote.

Neither of these worked, is there something else in the notebook name?

Looks from the action like it is set for “. Working”.

Can you use other Evernote actions successfully?

Can you edit the action’s Evernote notebook?

I can use other Evernote actions successfully.

I tried editing the notebook and that didn’t work.

I think to edit the script I need to be a premium member.

Yes. I think you would need to be a Premium subscriber for Drafts 5 to edit the action step.

If other Evernote actions are working it should just be a case of having the right notebook name in Evernote.

I tried it with “. Working” and it worked just fine (see below). Maybe double check your spelling and character case for the notebook? 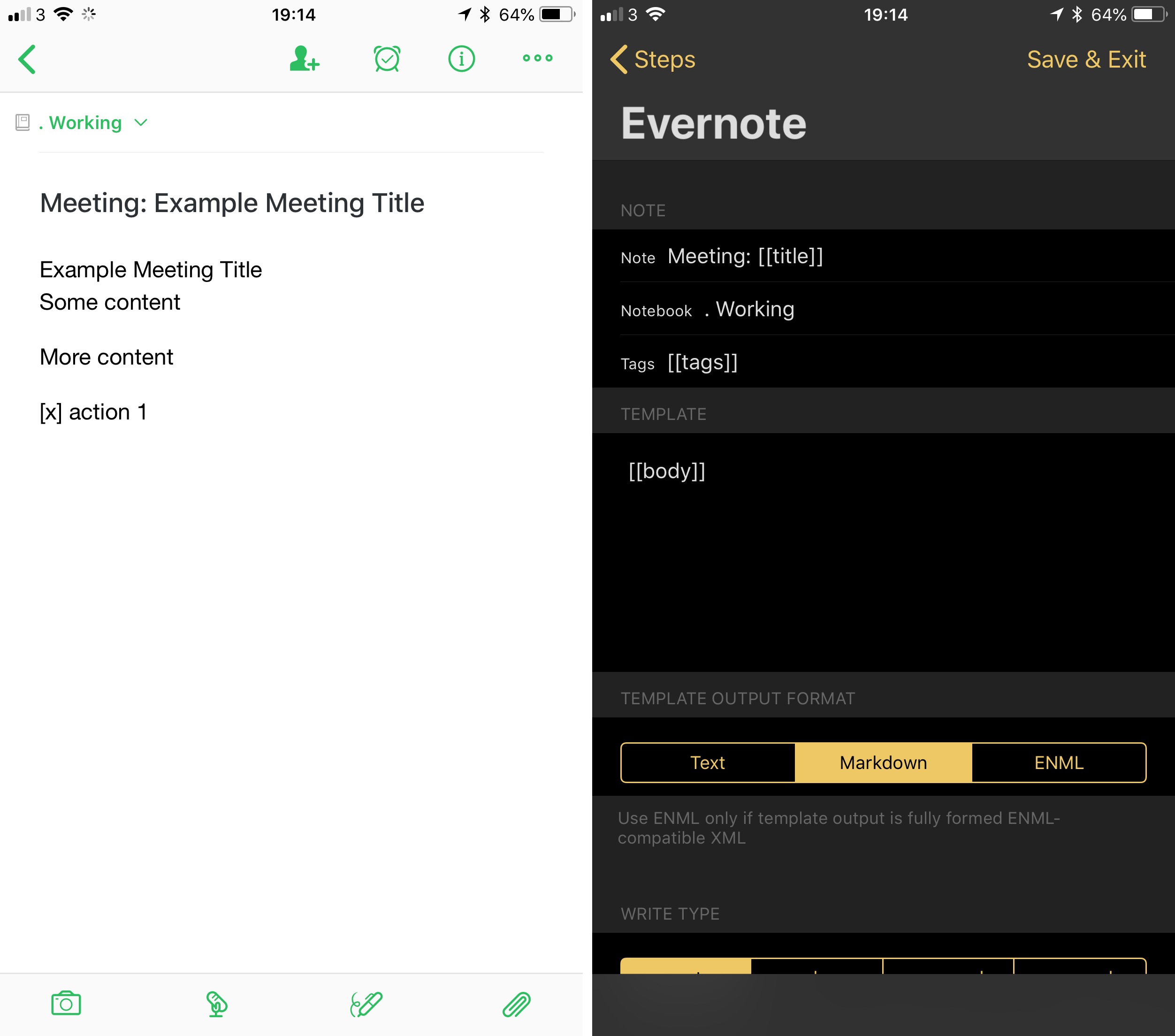 Got it to working finally without editing the action step.

Very strange behavior on my side.

Creating the Evernote notebook via (iOS) and then running the action script would not work.

Creating the Evernote notebook via MacOS first and then running the action script worked.

All spelling and character spacing was the same.

Glitch in the matrix.

Thank you @sylumer @RosemaryOrchard @jayelevy for all your help and my endless questions!

Glad you got it working. It sounds like it must have been a notebook name matching issue. I created the notebook via iOS on Evernote so I wouldn’t think it was an issue with the client app maybe autocorrect being overzealous?

Super! Glad you were able to get it working. Enjoy! — jay

I found the calendar selection for today only a little limiting when prepping for meetings coming up, so I duplicated it and made the calendar look at next 7 days. A very simple tweak and even more power from this Workflow!

That’s a great example of why this is both fun and powerful… with little effort you can take what someone else has created and tweak it to make it your own.

For those of you who use Outlook on your Mac, this is a simple Alfred Workflow to mimic the iOS workflow described above. After installing the workflow, simply select the meeting of interest on your Outlook calendar and then launch Alfred with the ‘no’ keyword (Note from Outlook).

The only additional setup required is to update the Arg and Vars step (yellow box) in the Alfred Workflow with the Evernote notebook you want to use. – jay

Love your workflow! It would be very useful at work. However, I’m using bear and OmniFocus.

I have already adapted the end of the drafts action to create a bear note. But I have a hard time wrapping my head around how to process and create action items and putting them into my OmniFocus inbox…

It’s my first try at scripting drafts actions, I want to learn but don’t know how to start…

Anybody have any ideas?

I am not conversant in OmniFocus scripting, however you may be able to use the logic within this Action to adapt for OmniFocus.

with the relevant portion from the OmniFocus action

I’ll begin there! Thanks!!