Noticed this app was free for the phone and 50% off for the tablet (Black Friday Thread). Downloaded and was struck that there was some clear documation and the app syncs with Dropbox.

Any experienced users out there willing to share impressions?

How does this compare to Devon Think?

I’m considering abandoning Evernote , and it looks like Devon Think or Notebooks may be contenders. I basically need an app to store documents/notes/(some pictures, but not as a gallery program), that syncs to the cloud and works on Mac, iOS, and PC.

I dropped a number of different notebook apps and DevonThinkPro for a simpler setup. If it’s a file (PDF, image etc) then it goes into KeepIt. If it’s a note, snippet, list or something for a notebook, it goes into Bear.
Sadly KeepIt doesn’t have a Windows app which may rule it out. For Bear, a web app is coming soon apparently.

I just commented on this in the BF thread. It’s fast and lightweight, leverages QuickLook for reading any file the Mac/iOS can, and doesn’t require docs to sit in a proprietary database. It doesn’t do as much as DevonThink (which I own) but it’s very fast and seems to work well.

I currently use EagleFiler on my Mac, and don’t have a cross-platform solution so I’m slowly evaluating it as such, but I’m generally reluctant because I like EagleFiler (which it resembles) so much.

When I first launched it I simply set as my app’s ‘home’ folder my 30Gb+ Documents folder, and it loaded almost immediately, effectively turning it into a Finder replacement where I could also edit files.

Here’s an example of some sub-sub-folder action, as seen by the Mac Notebooks app, using my customized choice of font and background colors: 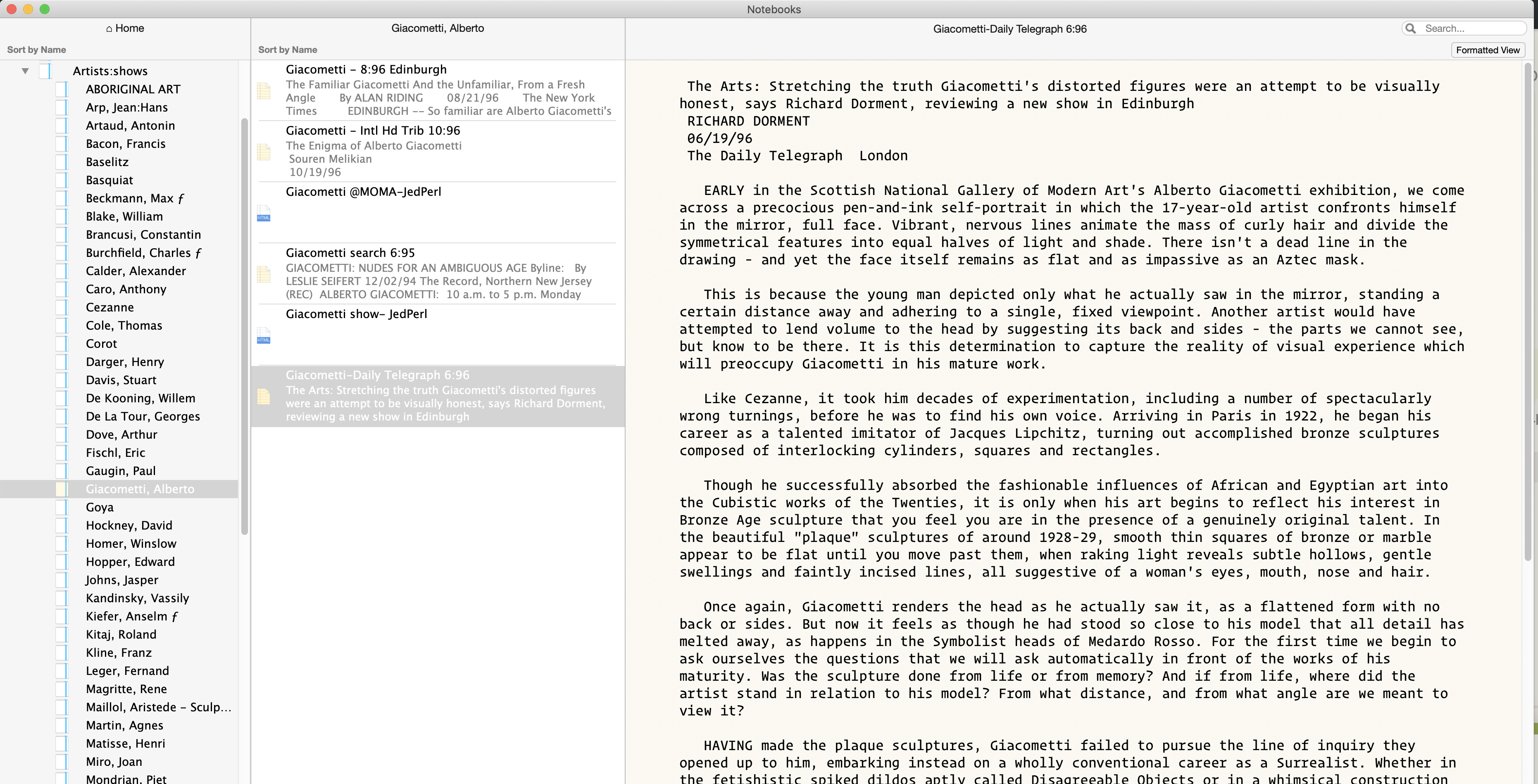 I started using Notebooks in August due to this blog post on The Appademic: Note Taking, Research and Organisation with Notebooks iOS. Since then I’ve found nothing else that makes it as easy to search, write, and organize, while still being able to easily access this information from any platform as it is just plain text files (saved in a Markdown format).

I have about 1300 notes currently and am in the process of extracting an old FileMaker Pro database (that I begrudgingly inherited) that will end up adding another 2400 files. I have Excel, Word, PowerPoint and WordPerfect files in the directory. (Yes I know, WordPerfect really? But the education industry has two extremes in regards technology, either blaze a trail or lag behind 20-30 years). Depending on what platform I’m on they either are view-able, or gives you the option to open the file.

I would definitely recommend downloading and trying it out, its strengths lie in the ability to quickly get to what you want by search, it’s on almost every platform, and if it isn’t then at least if you have a web browser you can access the files via Dropbox, and finally the editor allows for Plain Text, Markdown or Formatted Document (RTF) so you are covered no matter how you like to use text files.

I would recommend looking at Polar Bookshelf as well.

Markdown and ePub editor are feature words that caught my attention. I got the Dropbox sync working. I’m liking the possibilities of multiple platform. The documentation from the developers looks strong.

I think there is no iCloud sync as iCloud doesn’t fully support syncing of nested folder structures? It’s the same with Scrivener as far as I know…

I thin there is no iCloud sync as iCloud doesn’t fully support syncing of nested folder structures? It’s the same with Scrivener as far as I know…

Apparently some limitations remain persistent in iCloud syncing that Apple is not keen to quickly address.

Markdown and ePub editor are feature words that caught my attention.

Notebooks exports to epub format that can easily be read in Apple Books app, but I’m finding that reading imported epubs can be hit or miss with Notebooks on my Mac. I’m not necessarily blaming the app because it reads files by leveraging Apple’s QuickLook framework and there’s no epub QuickLook … but I have installed a wonky old open-source QL plugin for epubs that itself is hit-and-miss, so it’s likely that issues are related to that (so I’m probably lucky to be able to read any epubs in the first place inside Notebooks).

In all I’m quite liking Notebooks on the Mac, and I’m going to start experimenting with duplicating my current EagleFiler/Devonthink folders and files to Dropbox, and see how well the app works and sync with iOS…

I started using Notebooks in August due to this blog post on The Appademic: Note Taking, Research and Organisation with Notebooks iOS .

That’s a great article (and website) - just got the chance to read it. I didn’t realize some of the useful features Notebooks has for iPads, like its side-by-side 2Up button. Makes me want to get an iPad again!

I’m pretty impressed with Notebooks. I needed to make some notes about a project, started on paper, then considered the myriad apps I have. I decided to give Notebooks a try. Created a Markdown document, added headings and threw in a few screenshots. When I looked at the preview, it was a nicely formatted document. Very impressive. Looks great. I’ve been playing with it on my Mac and it reads my Documents folder amazingly quickly. I still need to create a Documents-only Dropbox folder to sync with my iPhone, but so far so good. (I wonder if the upcoming update will finally offer iCloud support.) It still doesn’t replace my use of Apple Notes (no sharing/collaboration, no easy checklists) but as a Devonthink/KeepIt-style hold-all app it’s looking pretty sweet on the Mac (in spite of the iOS version being more full-featured).

Did you ever use Evernote? I’m considering replacing Evernote with Notebooks.
One thing I’ll miss though is the (when it works) Web Clipper in Evernote.

Although, I also believe that the clipper makes it too easy to add everything on the web to Evernote (and becoming the “roach motel” MacSparky mentions).

I tried Evernote in one of its earlier incarnations, hated it, hated its (then) slowness and clunkiness. I saw early on that Evernote’s business model would end up putting the screws to people once they got their lives inside it, and they did exactly that, but aside from that they’ve had years of subscription stagnation that’s put them in a bind (they’re on their 3rd President in 6[?] years). Not interested!

I don’t need a big roach motel; a small one will do, for specific things. (Ultimately if forced I could probably migrate to Apple Notes, but it would be somewhat painful given its limitations.) Overall I feel I get better options overall from specialized apps - I save full-text versions of articles to Pocket, I print some things to PDF (and place then in Documents or in EagleFiler), I make notes in Apple Notes, I write in Ulysses (and other things), I have specific apps for alarms (Due, MultiTimer) Todoist for actionable to-dos and apps for calendaring.

What do you mean by this? What happened to Evernote?

What I meant by putting the screws was the dramatic curtailing of features in the free plan, alongside the 2016 changes in pricing tiers.

As for the mention of the stagnation and effects on the company, the CEO was pushed out in October, just weeks after the simultaneous ‘exit’ of Evernote’s Chief Technology Officer, Chief Financial Officer, Chief Product Officer and SVP of Human Resources - plus the layoffs of 15% of the workforce. And back in 2015 Evernote fired 18% of its workforce, shut down three of its 10 global offices, and replaced its long-time CEO Phil Libin with former Google exec Chris O’Neill (the guy who got fired this past October).

This is all tangential to Notebooks, so we could probably discuss it elsewhere - if you search the MPU forum you’ll find at least two Evernote-specific discussion threads from the fall which discuss this, and the years-long stagnation in Evernote’s subscription base.

I’ve been looking hard at this as well as an Evernote replacement and possibly a place for my work notes/Zettlekasten to land. I’ve been impressed so far but am having some difficulty with internal linking between notes. The developer has been pretty responsive so far on Twitter so I’m optimistic that the issues are due to my ignorance.

I’ve also been looking at Bear. Bear is lovely to look at and easy to use; the main downside is that it is yet another proprietary database that you are locked into.

As a sidebar I used to use Devonthink many moons ago but it felt like it required a lot of management. Maybe it is better but I have no desire to go back.

The Archive is good for (and made for) zettelkasten. Notes are highly linkable, and stored as plaintext.
I’m currently torn between continuing with The Archive, or moving (back) to Tinderbox, as demonstrated by @beck in her wonderful videos.

Yes I’ve been playing around with that app as well. It’s handicapped a bit by the lack of an IOS version. I know that 1writercan serve that purpose.

I’m trying to cut down a bit on the number of apps I’m using.

I used Editorial heavily when I was using nvALT a year or so ago, you may want to check that out and see if it fits your workflow.