I’ve been using OmniOutliner—the functionality is there, the Mac and iOS syncing is frustrating…and it’s biggest detriment is that it is very ugly.

I’m a Professor and use it most often to outline courses, lectures, projects.

Any other great programs I should look at?

Want:
iOS and Mac functionality
Paid app is fine but I prefer to avoid subscriptions if possible
Great interface that could even be “delightful” to use (like Things for to-dos)

Thanks for any help.

I don’t know if I see anything “ugly” about OmniOutliner. It gets the job done. I don’t use all of the features that are available in OmniOutliner. Maybe the repulsion is because there is so much stuff hiding and waiting for us to discover it?

Once I mastered the level styling, I felt more at ease with OmniOutliner.

Maybe we feel better when we like simple streamlined software?

I like MindNode but I prefer iThoughts X for my work. They’re mind mapping software but they do have an outline view. But it won’t have the ability to create columns like OmniOutliner does.

Numbers has a checkbox feature to create in their documents. Apple Pages and Microsoft Word has basic outlining features. Not sure what is else out there.

I’ve seen Outline for Mac but haven’t tried it.

I agree re: OO - I had a Pro license with v3 but it never stuck, in part b/c of aesthetics and the very unintuitive styling system.

I do most of my outlining in TaskPaper which can be converted to Keynote and/or Markdown easily.

But lately I’m much more likely to start in MindNode than an outliner.

I don’t use OO much – it’s fussy and the iOS app is horrible on a phone. An outliner should be unobtrusive, which OO definitely is not. Just my opinion.

You said you were not interested in a subscription, but I suggest you check out Outlinely. Nice Bear-like interface. macOS and iOS. Good dark mode implementation on Mojave. Import and export options. The annual sub is reasonable, and there’s a “lifetime” (i.e., one-time) option too.

Outlinely tries effectively to clone the look of Dynalist.io (not Bear), which is an online outlining service/webapp with a decent free tier and a too-expensive $100/yr Pro version. (It came into being when Workflowy.com was seen as stagnating, though in recent months Workflowy has reinvigorated its developement).

Outlinely for Mac ($40) got several updates this summer (someone off from school?) that fixed some bugs, added attachments, and supported Mojave Dark Mode, but there were no updates for more than a year before that. iOS version is free, but you have to pay $15/yr for syncing.

Personally, I use OmniOutliner, but I’m not delighted with it either. I’ve been toying with replacing it to some extent with Taskpaper, which I’ve had for a while. 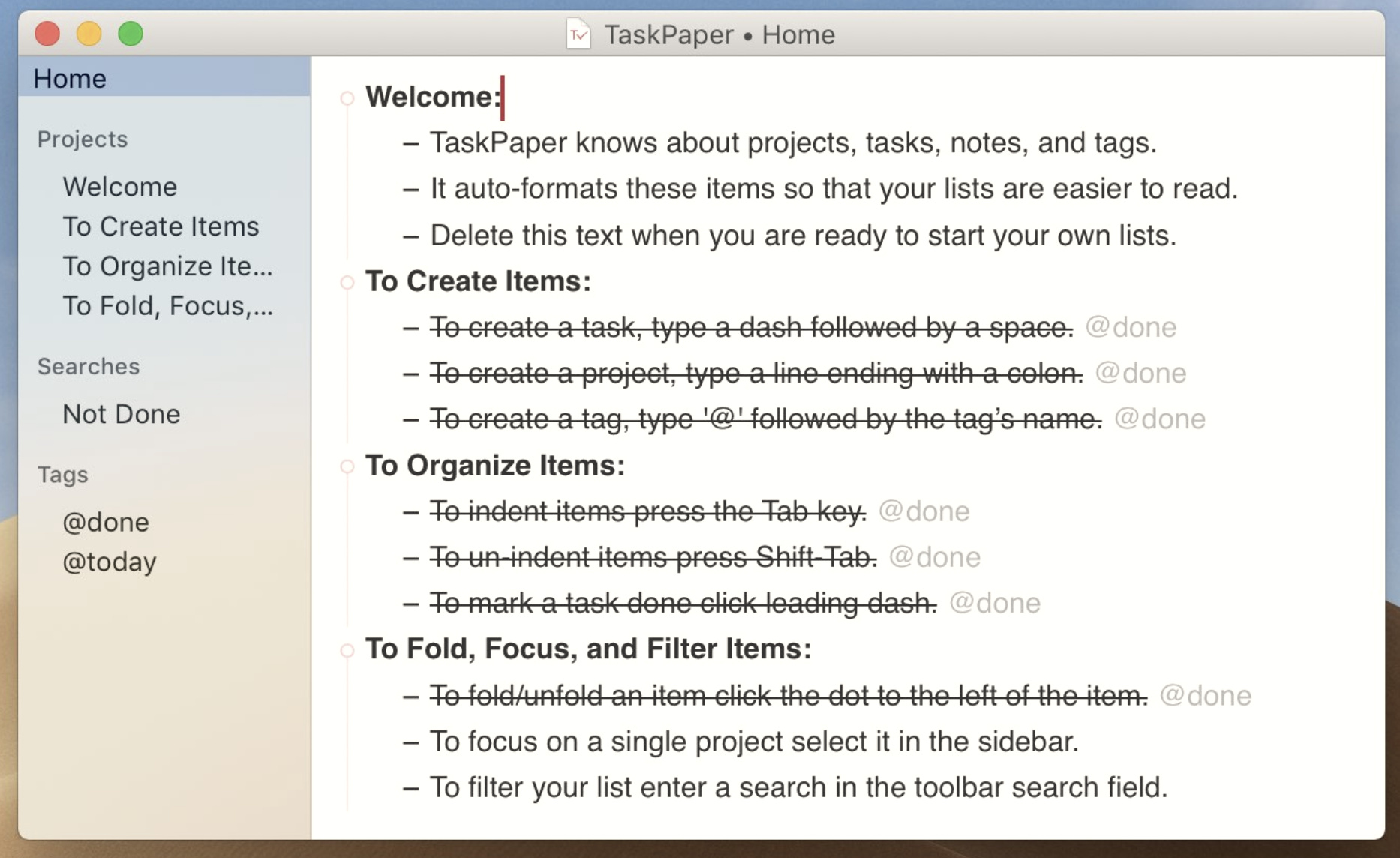 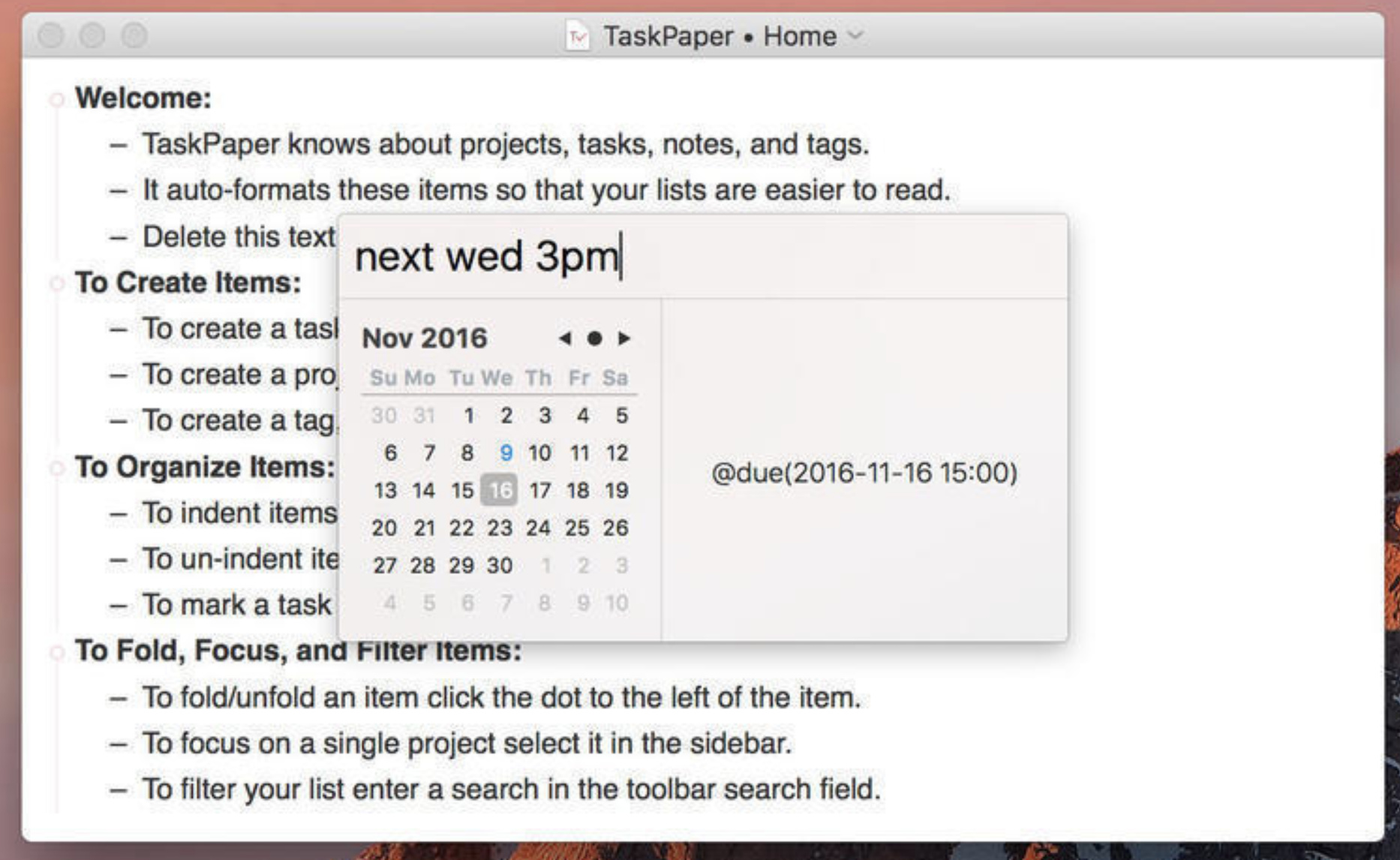 Thanks for pointing out to Dynalist…I am trying it now. I find the pro version overly expensive indeed. But I am starting with the free version anyways.

In the summer of 2017 the devs were finalizing Dynalist’s new Pro structure and briefly offered lifetime 50%-off yearly pricing to sign up. Then last Xmas they offered a one-time, 1-year 50%-off deal. So if you decide you like it and need any of the pro features (bookmarks, Dropbox backup, etc) wait a couple of months for a sale. (Personally, I think that 50%-off the current price ought to be the normal price for the non-free tier.)

One nice thing about Dynalist is that they’re public with their Trello-based roadmap, and users can vote on the most important future features.

If you like Dynalist’s structure but want the privacy inherent in controlling all your data, then Outlinely is a lookalike option (with some limitations).

For now I’m staying with OmniOutliner; it’s a solid, stable cross-platform app but I’m not crazy about its general UI, or the sometimes-horrible themes, and Omni is spending most of its time on updating its biggest-earning app, Omnifocus.

I have been using OmniOutliner for a couple of years to plan my university classes and find it excellent.

I have tried other software but keep returning because it does all I need and has a relatively easy to use interface. It also plays well with OmniPlan and OmniFocus, which I also use for my courses.

I briefly looked at Omnioutliner and several other apps. No opinions other than there is no need for me.

Ugly/clunky is in the eye of the beholder.

Would MindNode be an outline alternative? It does build a more formal linear outline — see bottom corner. For presentations the standard mindmap can be a splendid tool. It all depends. 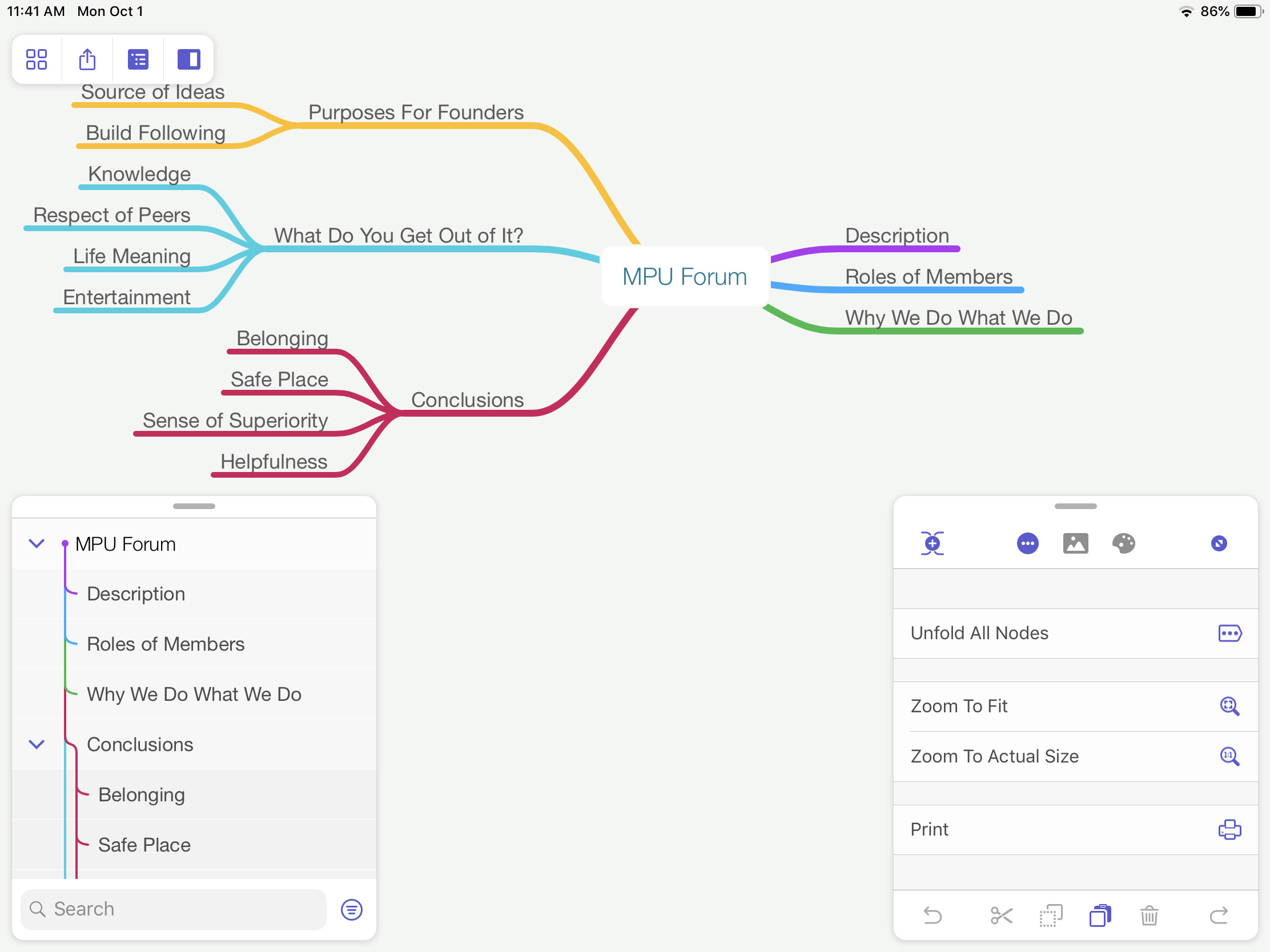 I’ve tried most of the above spending several years using OmniOutliner.

Last year I switched to writing my outlines in markdown. I use Sublime Text as my editor and wrote a bunch of macros (python) to manipulate the outline the same way OO does. For ex: I can move an item and it’s sub-items no matter how nested. Promote and demote operates on the whole nest.

I am trying to recreate the same workflow using drafts but I don’t have a lot of time to learn JavaScript.

The big benefit for me is that I can now use LaTeX equations in my outline.

Would MindNode be an outline alternative? It does build a more formal linear outline — see bottom corner.

You can’t edit/hoist/move items in the outline views of any Mac/iOS mindmaps I’ve seen. (I own Mindnode and iThoughtsX for Mac and iOS). That’s a biggie. And if you’re the type of person who uses outline nodes for text paragraphs, a mindmap is a less than ideal solution. Compare 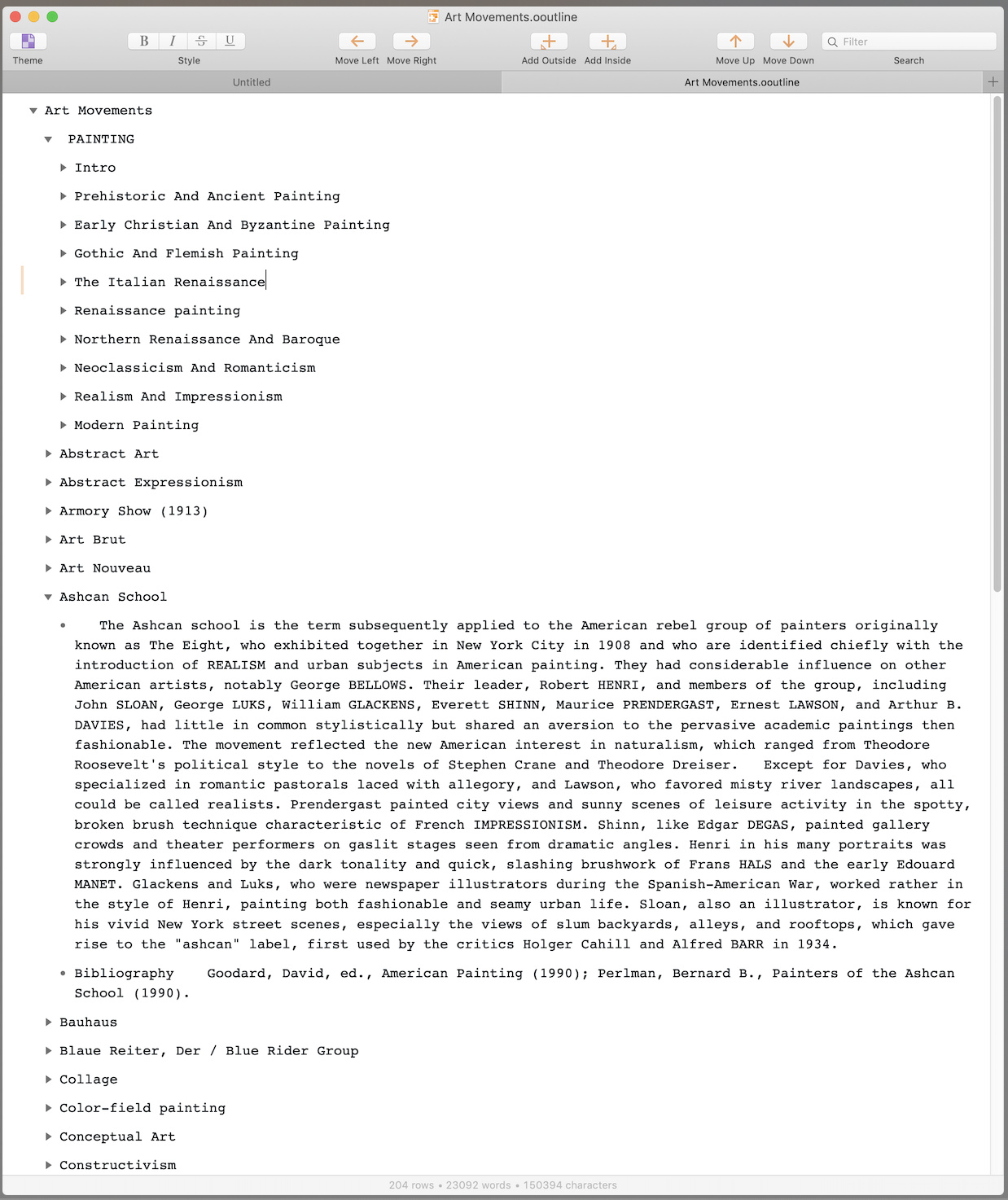 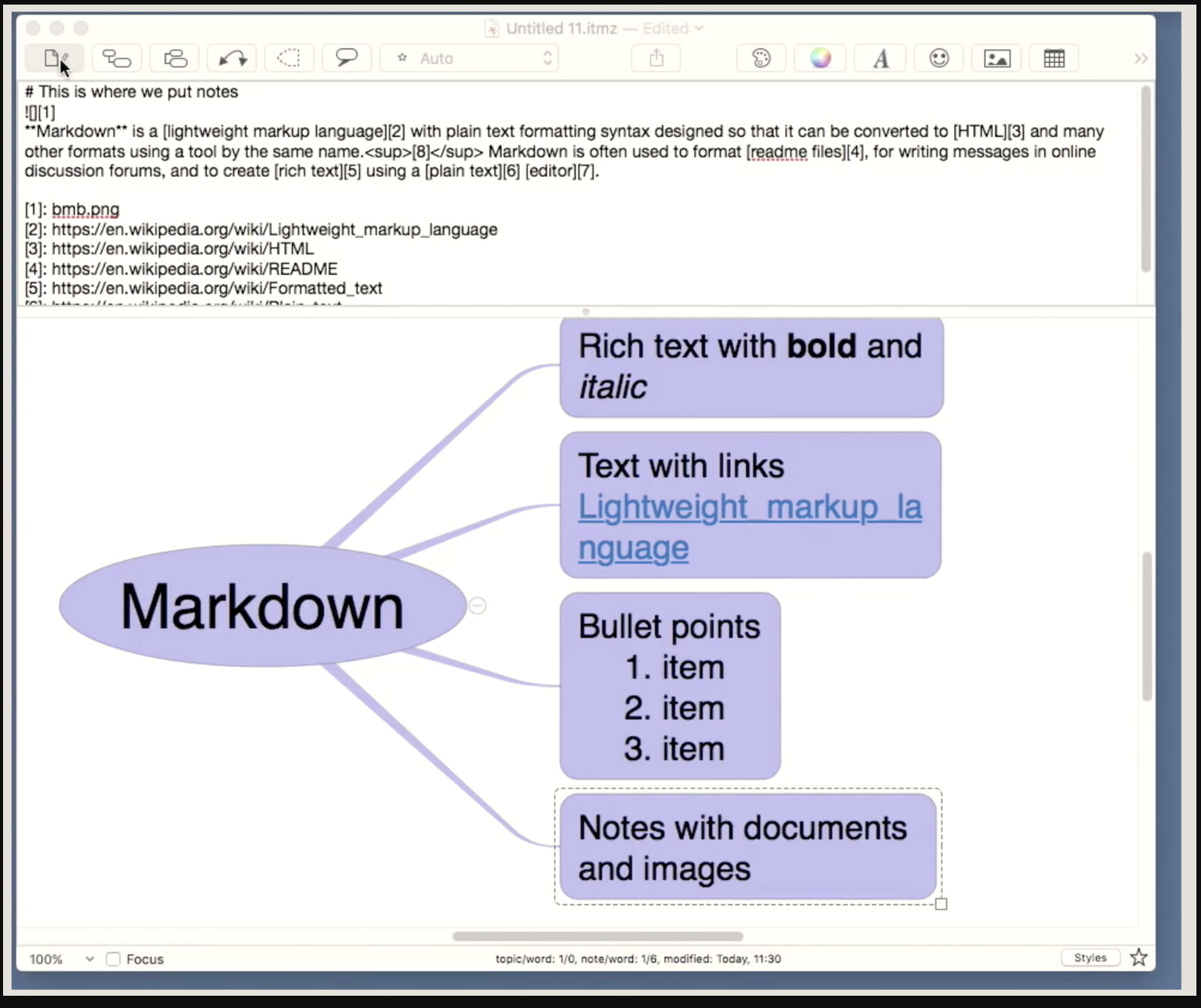 I can see why you’re looking. OO was always just weird to me. Sort of like looking at rows in a dBase II database.

Sort of like looking at rows in a dBase II database.

Now that brought back some memories!

Sort of like looking at rows in a dBase II database.

I’ve been looking for a Markdown outliner what StephenL made Sublime do, except that I’m not versed well enough in scripts to make that kind of magic happen.

Taskpaper is great for to-do lists and looks like it got a recent update (it’s been years since the other programs by the developer got an update).

Taskpaper is great for to-do lists and looks like it got a recent update (it’s been years since the other programs by the developer got an update).

I think there’s really only one other app now - WriteRoom. And on developer Jesse Grosjean’s Twitter he mentioned something this past summer(?) about updating it.

TaskPaper has been a gem Jesse originally wanted to deprecate and replace with FoldingText, but he was really slow at working on that other app, and there were a lot of stalwarts who stuck with TaskPaper. So last year(?) Jesse sold or gave FoldingText to another dev, Mutahhir Ali Hayat, who’s apparently (slowly) rewriting it from the ground up, giving it a “major re-imagination”. Not my cuppa’ to be honest. But Jesse has returned to TaskPaper and seems to be updating it regularly now.

One thing to consider that I haven’t seen mentioned is the lifespan of your outlines.

Mine rarely last more than a few hours before they get moved into Scrivener (with headings as documents typically) or some other writing program, or Keynote, etc.

But a lot of what OO seems oriented towards is using outlines as the basis for longer reference documents, full first drafts, etc., which I personally would never consider doing in an outliner.

You mean there was another option, lol?

a lot of what OF seems oriented towards is using outlines as the basis for longer reference documents, full first drafts, etc., which I personally would never consider doing in an outliner.

Is it possible you’re confusing OF with OO?