Overcast? How do I determine that Smart Speed is actually working?

So after the most recent episode, I’m giving Overcast another shot. I always listen to my podcasts at 1 1/4 speed. However, with Smart Speed of Overcast, I’m beginning to question if that function even works. Even though there are no settings, is there anyway to prove that the podcast is shorter other than timing it directly.

First, I would follow your advice and not think too much about it. But if you want to verify:

In general you should notice the pauses are shorter when you play it back with Smart Speed enabled and you will the timestamp maybe move inconsistently. Keep in mind that smart speed can be quite subtle with shorter pauses. I would also suggest not necessarily testing this on any of Marco Arment’s podcasts because they likely already have some of this done in post-production to begin with.

Another way to test is to listen to a passage at 1X with Smart Speed that has music that varies in volume, or has a fade-out. Usually during quiet passages or during the fade out you’ll start to notice it speed up. Basically smart speed can kind of ravage any non-speech sounds. It can be difficult to detect because it is mostly just a side-effect rather than the actual desired effect.

I suggest doing this test at 1X rather than 1 1/4x because it will be much more obvious, but smart speed will work no matter what your playback speed is (it’s just harder to hear it shortening the relative length of silences at higher playback rates since the pauses are shorter in absolute terms).

The music at the start and end of the Clockwise podcast is a good way to see how much it will speed up.

By default my podcasts are set to the 2+ setting in Overcast. Music sounds “wrong” if I hear it any slower speed now.

It works. I’ve used Pocket Casts myself (it’s cross-platform, does video and has other niceties that make it better for me) for the last few years, and it has a smart speed function called “Trim Silence”; according to the app “In total you’ve saved 94 hours, 37 minutes, 12 seconds using this feature.”

The music at the start and end of the Clockwise podcast is a good way to see how much it will speed up.

BAM! That’s the one, I knew there was one set of intro/outdo music that really set it off, and the clock ticking is a perfect specimen.

I always just assumed it works b/c if you look at the time on the detail of an episode it is always less than the time on the list of unplayed episodes from the podcast’s main screen. Hopefully that makes sense. For example, StartUp Podcast released today is listed as 24:30 on the main screen but if I drill down to the episode detail it is 23:22.

Not really an outside datapoint, but when running on mine it shows the actual x speed above the smart speed button (which is constantly updating). So if I have it set at 2X it will say 2.34X then 2.28 and keep changing as it finds pauses.

I definitely notice a difference listening to the Automators podcast. I have a hard time following Rose’s accent at accelerated speed. That one podcast I set to 1x instead of my normal 1.25x.

Not sure I can listen to the ATP end theme at 1x speed anymore.

I’m at 504 hours saved by Overcast. Worth every penny! 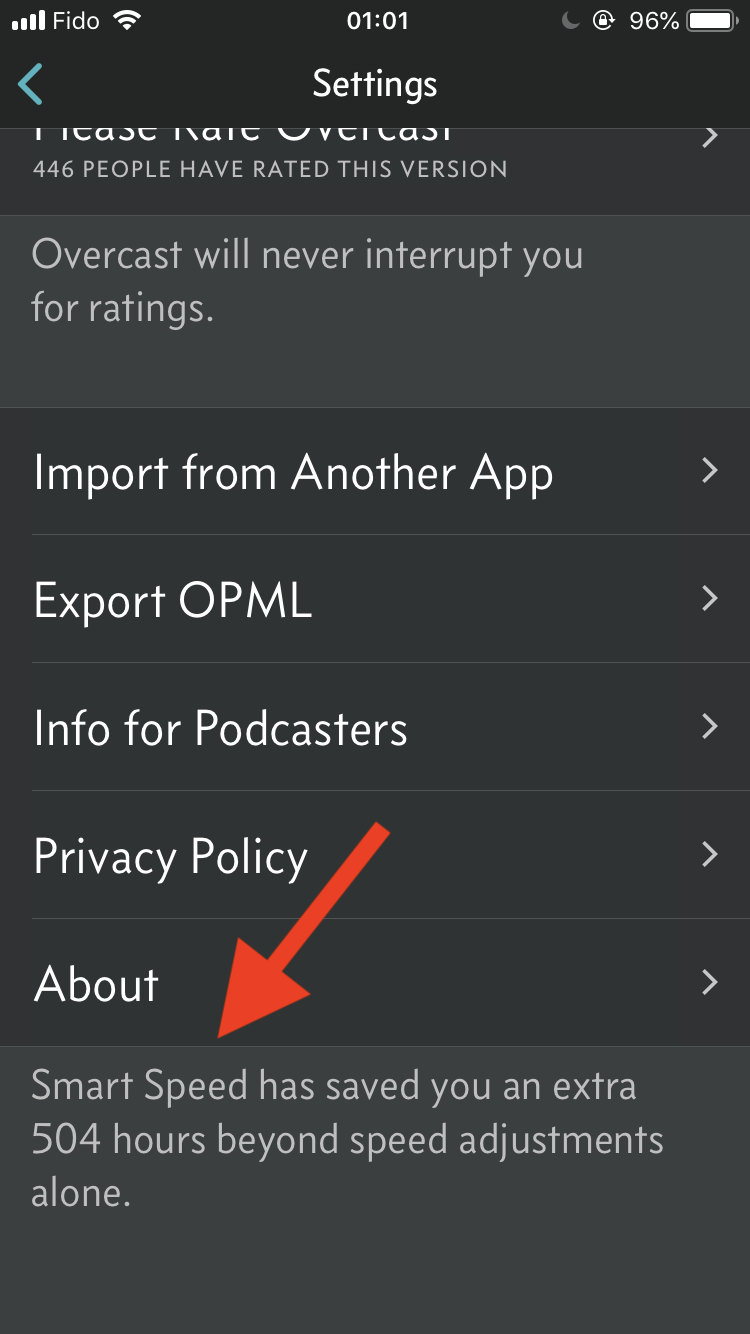 Unlike everyone else who’s posted here, I don’t want to speed through podcasts. I want them to play back slower. Okay, not just to savor the content, but to help me get to sleep. Fast playback sounds frantic and unsettling, not what I need in the middle of the night. If i miss something I listen again and probably catch what I missed. Overcast used to have a negative speed option but now doesn’t. So I’ve switched to Pocket Casts.

That’s Interesting. here is mine after 3 days!

Is the Smart Speed functionality only available if you buy the software and not available on the free version?

Speed funcions are set in the playback window - swipe right (show the window to the left) from the show art:

From here you can set it for just this podcast or for all. The options are:

I want them to play back slower . Okay, not just to savor the content, but to help me get to sleep.

Have you ever heard Dolly Parton’s ‘Jolene’ slowed down? Sounds amazing.

There is still a less than normal speed playback available in Overcast; only a single option, but it is there…

That’s it. I assumed it was turned on by default. I didn’t know you had to turn it on. Now i bet ya it works

This is how much I have saved so far.

Even Smart Speed at 1x is worth it. The only podcast I can stand over 1x is gruber.

Well, the good news is once I figured out I had to turn on Smart Speed, it is incredible. I already saved 7 minutes just on a half an hour run at the gym. Not sure how it works so well, but I’m a convert!