Years ago I made a small Mac app called Go2 and put it in the Mac App Store. It was there on day one when the MAS launched, but it didn’t do as well as I hoped it would. I moved on to other projects, and eventually shut down development of it. Fast-forward a few years, and I discovered that a friend of mine still uses the app every day, and he asked for a couple of updates. Since the codebase was so old, I couldn’t just add the updates he wanted, so I built an entirely new app that for now I’m calling “Moose”. Then it lets you set a system-wide hotkey to access the bookmarks.

It saves the last four opened bookmarks in the menu for quick access. Since I put so much effort into it, I’m thinking of putting it back in the app store, but I thought I’d reach out to the MPU community and ask a question. What would you like from an app that could bookmark any URL?

No subscription, for one thing!

This looks like a cool concept for an app. A few features that would make sense to me:

Wow, I see a great possibility on using it side-by-side with Hook!

From my point of view, robust keyboard shortcut will be great! The layout of Moose reminds me of FSNotes, a great app inspired by nvALT. With that, I am thinking all aspect of app navigatable with keyboard, for example:

The tag part could make for an interesting app launcher: I have hundreds of apps on my Mac , a lot of them I forgot about their purpose.
If you could come up with a way to bulk import apps into a group (tag) by checking the list of apps installed and showing a window allowing us to select (checkbox) which one to add , it could be interesting.

That looks intriguing. I would definitely second the need for keyboard access: such an app only makes sense to me if I can be faster with it than by using my usual other means (mostly Alfred). Clicking in the menu bar is going to take too much time since that means that I have to reach for the mouse and I use most apps full screen.

However, make it for instance easily accessible via Alfred for all the custom items that you store, enable some sync (I use two Macs) and I would be very, very interested.

(Only my two cents of course.

Thanks all! Lots of good ideas here, I don’t want to promise anything, but I can say that I’ve added a few to OmniFocus. A few notes:

Here’s a short screencast of using the Menu Bar, each time the menu pops up I’m hitting my defined hotkey, ⌥⌘Space. 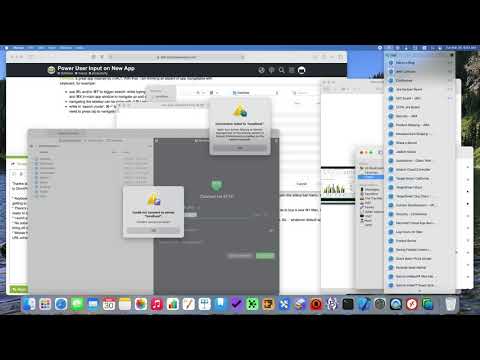 thank you for listening, and really looking forward to using it. Keep us posted!

I would love this. And tagging or even a short notes/description field (optionally displayed, eg as a line or two of smaller italicized text under the link?) and would be great — I have a lot of circumstances in which I need various apps, documents, links, etc. etc. infrequently — and like someone above, it would be great to have a reminder for why I saved it. If it were searchable, so much the better.

I think things are moving along well.

I’m having difficulty figuring out what this app does. It seems a bit like Hook, which is an app that lets you bookmark anything — URLs, documents, tasks in Things or OmniFocus, etc. But different from Hook in that this app also lets you organize and display those bookmarks in a convenient window. Correct?

That sounds about right. I’d saw where it differs is that Hook is all about establishing relationships between objects, and Moose is a library for storing bookmarks.

When you’re ready for beta testing, I’d be happy to help.

This sounds like, well, what I wish Hook was. I can see myself relying on a system like this for organizing everything.

But I’d be concerned about futureproofing.

Future proofing is a valid concern. That’s why I’m putting in plaintext import and export, and why there’s no cloud component other than iCloud sync. The idea is that Moose should keep on working for as long as there’s a macOS.

I had an app idea some time ago, which you could integrate and solve a real problem for a lot of users.
Many “power users” try to create links between different tools. (See Sparky’s Project Status Board for example.)
Say you manage your tasks in Things, your notes in Bear or Drafts, store documents and files in your Dropbox or iCloud files and visualize the project in Mindnode.

It would be possible to put the according URLs in the note section of a Things task, but it looks very messy:

Your app could—besides all the bookmarking features—also help to set up custom URL mappings to clean up those quick link collections.

The result could look as follows:

go2://o as a generic command to trigger the look-up of the “real” URL scheme to call. The user should be able to define a group shorthand (e.g. ITP) and go2 could register it as a new parameter to the o(pen) action. The values BEAR etc. are also user defined and just trigger that the corresponding defined URL (the lengthy bear://... one from the first screenshot) is opened in background. Managing the various mappings for the different values is done in the nice interface of the Go2/Moose app.

Sadly, I don’t have the time to build it and your app has already laid out most of it and an integration looks possible.

Let me know what you (and the others) think

PS: Sorry that I used Go2 in the mock-up screenshot. It could of course also be moose://. However, I would enjoy that the URL would be readable as “go to o(pen) ‘Important Test Project’ in Bear”.

No subscription, for one thing!

And I agree to this.

And would like to add that an Alfred integration would be wonderful. It’s real inconvenient to manage your own custom links with custom workflows in Alfred. A more user friendly interface to mange those URLs and have them nicely callable with the proper app’s icon (which Go2/Moose seems to do elegantly).

Interesting, I’ll think it through.

Hook’s basically like a Swiss army knife for linking. We add new linking features in just about every release. For instance, we recently added support for deep links to PDFs.

We don’t aim to replace other apps however. So if Moose becomes a linkable app, then users will be able to invoke Hook within it, and get the best of both worlds.

it’s a pleasure being able to chat like this with a developer.

Does everyone feel this way? Personally it makes me vaguely uneasy to have the forum pulled into the app requirements/design business.