It is interesting in that I miss two things in Things and one thing in OF (that’s a lot of things! My writing teachers would be horrified.)

In Things, I miss the “when” date and the quick entry feature.
In OF, I miss the review feature.

But, for my needs, I gain more with deep system integration with Reminders than I lose not having those features. I’m also growing more “dependent” on the smart lists and tagging features in Reminders, which I find constantly helpful.

I miss start dates, too. Not having them has forced me to conduct a weekly review (and then tag the items I want to accomplish that work week), but I’ve also noticed I’ve been reviewing tasks almost daily and that’s been really helpful.

I also love the Fantastical integration. When I was a Things user I experimented with dragging/dropping over to Fantastical but it got too unwieldy. I’m sure time blocking doesn’t work for everyone, but it’s been effective for me.

Cultured Code is known for not speaking about new versions, and they often use these very general statements. Their history indicates Things 4 should be released this year or early next year:

In 2017, there weren’t a lot of early indicators for Things 3. One day, it just dropped. I’d expect the same thing to happen with 4.

Yet another point about Cultured Code development ethos is that they always get the new OS features done thoughtfully, beautifully, and timely with every major OS release.

They have a stellar tracking record on this. As an example, Things’ scribble implementation, to date, is best in class and was released on iOS 14 launch day (see post). Same thing happens with its widgets, keyboard shortcuts and many other features. These releases are never preceded by teasers, public betas or anything flashy.

Don’t let the lack of a major version number fool you: this app is constantly being updated and improved.

I agree with this. Unfortunately, the new features they add (like scribble) are not useful to me. So it’s a beautifully implemented feature I’ve never used. I assume we’ll see the same again this year.

Perhaps we need to pivot to a different set of expectations where major version numbers are becoming less important.

Todoist doesn’t have “version X.0” anymore. I have the Ulysses app and they consistently produce iterative features that accumulates over time. It certainly has enough noticeable features added on over time. The app says version 23 but I really haven’t paid attention for a long time.

Is version numbering even important anymore?

And features like scribbling may not be important to one person but it might mean the world to someone else.

I wouldn’t wait for Things 4. I’m just trying to keep up with my own workload and making sure that my app is helping get things done. Maybe one day, Things 4 will come around. We’ll celebrate then.

forced me to conduct a weekly review (and then tag the items I want to accomplish that work week), but I’ve also noticed I’ve been reviewing tasks almost daily and that’s been really helpful.

In this case, the lack of a feature may be beneficial.

I do a weekly review but in addition, I created several smart lists (see below) to help me identify upcoming todos that I need to be working on. I have a lot of presentations and reports to give so I’ve created smart lists to help me stay on top of these. Something similar can be done for upcoming tasks. I have one for things to work on this coming week based on the due date.

This is where tags and smart lists come in handy.

Come Monday, the new features for Reminders and Notes will enhance both apps. 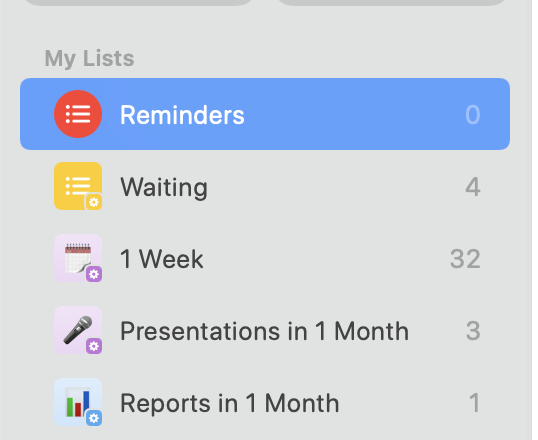 Following up on @Wilson_Ng’s point: Things should abandon the version whole-numbering. At the first opportunity–perhaps Monday–they should just change the product name to Things. Just Things.

Version numbering would only be used for tech support and documentation purposes, and the version number will be the year followed by a dot-number. Things 2022.1, Things 2022.11, and so on.

Too often, I see discussions about how Things 4 is taking forever to come out. It creates the impression that Things is falling behind.

I am a Marketing Professional. They should listen to me.

They will drop the numbering when it goes to a subscription. Then there won’t be a version numbers, you are either a free or a paid user of the the app.

Versions are important in an app that doesn’t use an ongoing subscription model.

I’m an original Things user, so I love the app. But, what has bummed me out in recent years is that the updates seem focused on stuff that’s fairly peripheral (the how—like scribbles) rather than introducing expanded core capabilities (the what—like more advanced filtering or saved searches). On a feature basis, they are falling behind. Even if one loves the more minimal ethos. In terms of UI and execution, no argument that they’re without peer. Besides the 5-year interval precedent, and the fact that they are not a subscription so new versions to drive purchases are critical, and the new OF coming out with Todoist really increasing its pace of updates, the best evidence for T4 is how thin updates got this year. A lot of them were “under the hood” and very small improvements. It seems they’ve had a lot time to be working on it.

The only substantial thing I can reminder them adding this whole year was markdown support in notes.

That’s going off memory, but that’s it.

Versions are important in an app that doesn’t use an ongoing subscription model.

Yes, this is true. I hope they’re able to sustain their business model. With version upgrades, we do have to wait a long time because a lot of new features get bundled up together to make it a Big Bang release.

With subscriptions, we’re able to get new features at a steady rate instead of going 5 years. Todoist is able to churn out features faster than most tech companies.

Mindnode’s subscription model has allowed it to bring features up to date to match MindJet Manager and iThoughts.

Hopefully Cultured Code is able to keep their doors open so that a new Things can come out.

I think their biggest problem is that Reminders has made the functional gap very small. Indeed, Reminders has capabilities that things does not.

I switched from Things to Reminders + GoodTasks a few months ago. TBH, I don’t know if that was a great idea … but neither do I see any reason to switch back. And when I’ve finally upgraded to iOS16/iPadOS16/Ventura, I’m optimistic I can ditch GoodTask.

I switched to Things3 for about 3 months after being a Omnifocus user for years. When OF announced their subscription model, I looked for an alternative and settled on Things3.
With the new updated Reminders app in iOS 16 and Mac OS Ventura, I realized that this gave me the functionality I needed with seamless integration. So, I uninstalled Thrings3 on all my devices and now only use Reminders for the past 4 weeks.
With OF and Things3, I was spending too much time tweaking their respective systems. Reminders makes everything simple for what I need.
Cheers,
Bud

OmniFocus hasn’t switched to a subscription model. It’s just an option they offer next to the same one-time and upgrade licenses they’ve always sold.