I just finished Federico’s excellent iOS 13 review. One thing I was curious about is he went all in with the new Reminders over the summer. I’ve been a long time Things (and before that Omnifocus) user. I’m not convinced that Apple Reminders can replace Things yet, but I’m thinking about giving it a try. Has anyone else tried making the switch at least as an experiment?

Things seems like a very capable app. I prefer a service like Todoist or TickTick to better integrate with multiple platforms. (And in Todoist’s case I love the 2-way-sync with calendars, so I can change an event in Google Calendar and it will change immediately inside Todoist). You haven’t said why you think Things is insufficient for you, but since Reminders is free you can find out for yourself if your specific use case would justify a switch. On the other hand, since Things is a one-time purchase, and you own it, exactly why do you feel the need to switch to Reminders?

At any rate, I’d generally be wary of following Federico’s path, as he changes his apps constantly. He has used (and rhapsodized over) Omnifocus, Todoist, Things and most recently GoodTask, often contradicting earlier justifications as to features he needed. His articles and podcasts about GoodTask (which is also based on the Reminders framework) especially seemed like stunt-casting, in which he’d deep-dive into the app, spending countless hours delving into its plumbing and customizing it… only to drop it for Reminders itself. He did the same thing with Todoist, explaining years ago how he “needed” to be able to share and collaborate with others and that’s what made it superior for his use… only to surprise-switch to Things which did not offer that capability.

I don’t use Reminders as my main task manager (I’ve been using Todoist for a year), and I haven’t upgraded to iOS 13 so I haven’t played with the refreshed Reminders. But when I want to use the Reminders framework I use Memento (reviews here and here) , which is a cleaner, powerful, prettier front-end to Reminders (using Apple’s API for Reminders), and offers shortcuts, an Apple Watch app, integration with Messages, Siri support, app themes, an iOS widget, custom time alert presets, and more.

Since I haven’t used the updated Reminders I don’t know how much it has caught up to Memento, or whether it’s even made Memento superfluous.

Things is great, but I generally prefer to use Apple’s apps if they are serious about it. For example, Apple Notes was largely neglected until iOS 9, but I now use it every day as my main note taking and capture app. The first party apps have better integration throughout iOS/MacOS that is hard to beat.

Reminders also has some features that are missing from Things. For example, location reminders, plus the cool new Messages reminder.

Things is also designed around the GTD paradigm, which I used to follow strictly, but I find less and less helpful as time goes by. I find myself mindlessly adding contexts which I then ignore.

I’m going to try Reminders for my personal tasks as a test. I’m not sure it would be adequate at work where I have to manage many projects with different people and teams.

You’re right about Federico’s review #excellent! I bought and have tried to use OmniFocus 2 for a while but find it to be overkill for my needs. The new Reminders has had some great updates and am giving it a try.

I think it boils down to:

I was thinking of switching until I heard this week’s Connected. The fact that the relevant chapter is called “Reminders is bad” sums it up! There seems to be a major iCloud bug that has broken it for some people.

I have been using Reminders since post iOS13 release instead of Todoist and I love it. I was never a GTD follower so can’t advise those that are how it stands up to other apps, but I will say my favorite feature is that since Fantastical can read the Reminders database I now see my dated reminders in the app instead of having to connect an external cal from Todoist.

I started with Reminders and ended up with Things. It works, looks great and the only switch would be maybe to Omnifocus. Maybe.

Just an update. I’m sticking with Things as I realized that I would miss all the features it has for organizing my life. But I’m using Apple Reminders for geofencing and Remind me when Messaging tasks, which Things can’t do.

I’m sticking with Things as I realized that I would miss all the features it has for organizing my life.

Just out of curiosity, would you mind to share which features exactly you were missing?

While reminders looks nice, as there are no tags or perspectives, when you end up with a long list of items to do today or tomorrow etc, there is nothing that let’s you know what project the items are from. So if you have a list of same named actions for multiple projects, there is no way to know where they came from

I have used Omnifocus for years. I’ve had two tries to simplify and move to Things … and it just never sticks. Now, after using Things for 2 months … I’m going back to Omnifocus. I’m resisting the idea of adding a task to Omifocus to “Try Things”.

Things is just SO GOOD for me. That said there are features with Reminders that always makes me want to make it work.

Jon Mitchell wrote a great write up about Reminders

Here are my personal Pros / Cons for Reminders:

All that said, Reminders overall “works”. I don’t understand some of the design decisions Apple made here, but I’m hoping that they iterate on it quickly (that I feel like isn’t likely) and some of the low hanging fruit gets picked.

Todoist is on the eve of releasing a rethink/rewrite, which is supposed to offer a Kanban card view (a la Trello) and better subtasks (which is a current deficiency). I haven’t upgraded iOS/macOS yet but I’m very hopeful about Apple’s Reminders and its new subtasks.

I don’t think I could switch completely to Reminders since I have a lot of repeating tasks in Todoist, and everything has a(t least one) tag associated with it which makes for easy sorting.

Todoist lets you set multiple alarms prior to a task event, so I use that feature to make Start alarms.

I’m finding that my needs slightly exceed Reminders’s abilities, are are easily well within the features of most commercial task managers; it’s mostly a matter of what seems natural/pleasurable to use. Todoist is … acceptable … to me, and I’m waiting to see what the revamp looks like. But task managers are really a personal thing, and my ideal app doesn’t exist but has elements of the capabilities and interfaces of Todoist, TickTick, and Things. (Omnifocus is just too too much for my needs.)

Todoist still has not implemented Kanban? They were talking about almost a year ago … Hopefully they get it together. I always liked Todoist as the best multi-platform GTD app.

If Omnifocus works for you, then stick with it. It is definitely the most powerful task manager out there. I used it for years, but became frustrated with tasks being hidden. I like Things because your task will be visible in at least 1 of the main tabs. I never have that feeling, is OF hiding away a task in this perspective?

Todoist still has not implemented Kanban? They were talking about almost a year ago … Hopefully they get it together.

The CEO gave a sneak peek last December, and they said it would be available at the end of this year. No change there, no word on them not having it together. And most of the new features are already live in beta.

A frustrating—albeit minor—inconsistency in how Fantastical handles reminders:
On macOS, Fantastical places scheduled reminders in line with calendar events. This is great when you want to plan out a day. It’s easy to interleave blocks of time and scheduled tasks, and see them all in one place.

On iOS’s calendar view, for whatever reason, the reminders appear separately in the “all day” slot. This needs to be tapped to see them. There’s no way to view the cadence of a day, as the DayTicker (the main view) simply displays everything one after the other, with no discrimination between ten tasks in an hour and a four-hour event.

I personally use Reminders for this kind of scheduling, and manage projects and plans in OmniFocus. It’s nice because both ends up having distinct roles in my approach. Nonetheless I’d love a mobile calendar that displays these intuitively.

Todoist did not have a proper update in more than a year so they should try harder.

Was curious about this, so I looked it up. Here’s the preview @bowline mentioned.

Sneak peek at something that's coming in 2019 to Todoist 🙌 — This is a very rough draft, and we don't have a release date yet, but we are very excited about boards, and they're coming to every platform. https://t.co/4RXOwDhHSx 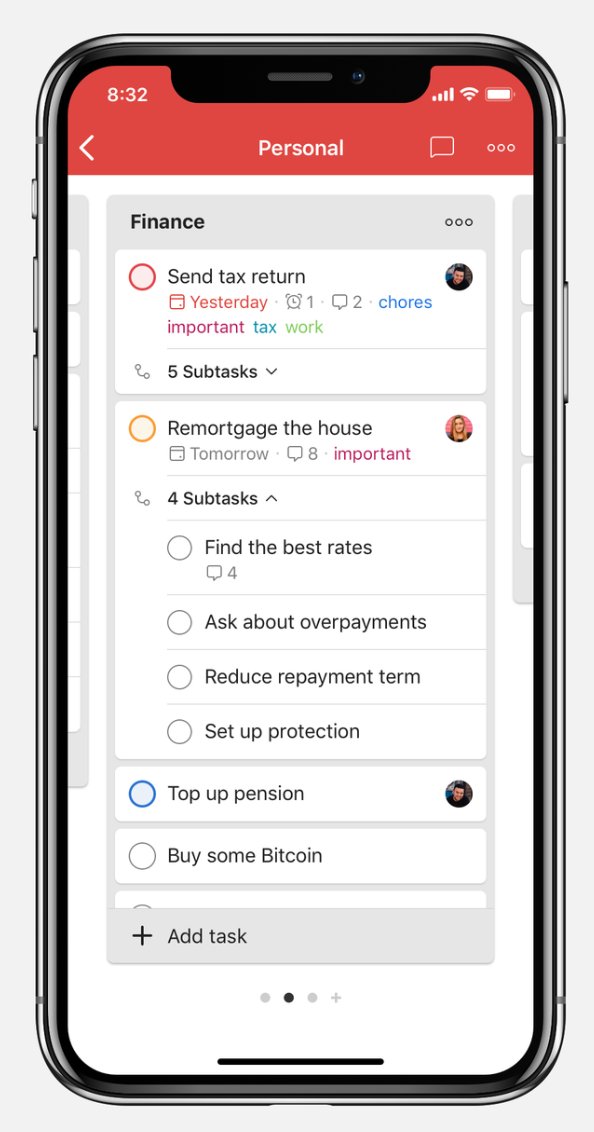 I loved Todoist but shifted to OF because of the customization it offered. (And because OF seems like the only task app that takes duration metadata). I do miss the Karma system and the web automation it allowed, though. Maybe I’ll switch back when this is released…

I do wish more of these apps would allow for customized metadata. Tags are kinda dumb for things like task duration, “Do” dates, and other kinds of information.