Can anyone recommend a good RSS app for the new iPad Pro?

I’ve been a longtime Reeder user on both Mac and iOS, but I’m getting annoyed with it’s buggy display on the 12.9” iPad Pro. I’m looking for something that can hook into FeedWrangler and preferably has been updated for the 2018 iPad Pro (or at least doesn’t have any annoying graphical bugs on the new iPads).

Fiery Feeds. Been using it for months now and really like its features!

I am a big fan of lire because it can download and cache articles. Reeder should appear in the version 4 by the end of the yer.

For several years, I have been a big fan of Inoreader. I haven’t tried it on iPad Pro, but it works great on iPad, iPhone, and MacOs browsers. The developers are very responsive and the app is frequently updated. I use the premium version, but the free version will give you a good feeling for the app.

I don’t know about FeedWrangler, but Feedly has served me well.

I can recommend Fiery Feeds as a very good RSS reader. The developer, Lukas Burgstaller, is very responsive (e.g. received a response from him within 1 day on a submitted feature request).

Frederico Viticci has done an extensive MacStories review of Fiery feeds.
The review contains an image on how Fiery Feeds looks on an 12.9" iPad.

The app is a free fully functional RSS reader, which you can try out. In addition, it has a number of premium features, which are unlocked based on a subscription ($9.99 per year). From experience, I fully recommend the premium features.

I can recommend Fiery Feeds

Seconding the recommendation for Fiery Feeds - app is regularly updated and supports most RSS services (I use Inoreader for the backend).

I use Reeder on my iPhone and Mac. But just downloaded Unread to check it out again. I can also recommend Feed Hawk, which makes it possible to add feeds from websites easily through the share sheet in Safari

+1 on Reeder 3 - I use a free Feedly account to add RSS that needs sync between devices, but this is only once or twice a year. Otherwise locally added RSS feeds.

PS: I use Unread with my Feedly (Pro Lifetime) account, but it supports Feed Wrangler, Feedbin, Fever, Inoreader, and Newsblur as well.

I just started using Newsify having previously used Feedly, Reeder and Unread. Newsify has support for the new iPad pro (like Unread but unlike Reeder and Feedly), allows keyboard navigation (unlike Unread), manages well in either aspect orientation (unlike Reeder) - and is wildly customizable (unlike the Feedly app). (I’ve also had repeated graphical glitches with Feedly during regular use.)

I’ve since sprung for the paid level that removes ads and allows for the download of full text articles. I’m a big user of RSS feeds for keeping up with news and this has been a great new tool.

I subscribe to my RSS feeds through NewsBlur for $35/year:

Even though I own Reeder and Unread on my iPhone I use Newsblur’s site-specific iOS app, which takes advantage of some of the service’s unique features that don’t appear when using regular newsreaders (like its Top Shared Stories on Newblur, or its Infrequent Site Stories, which bubbles up posts from sites with low-volume posts). 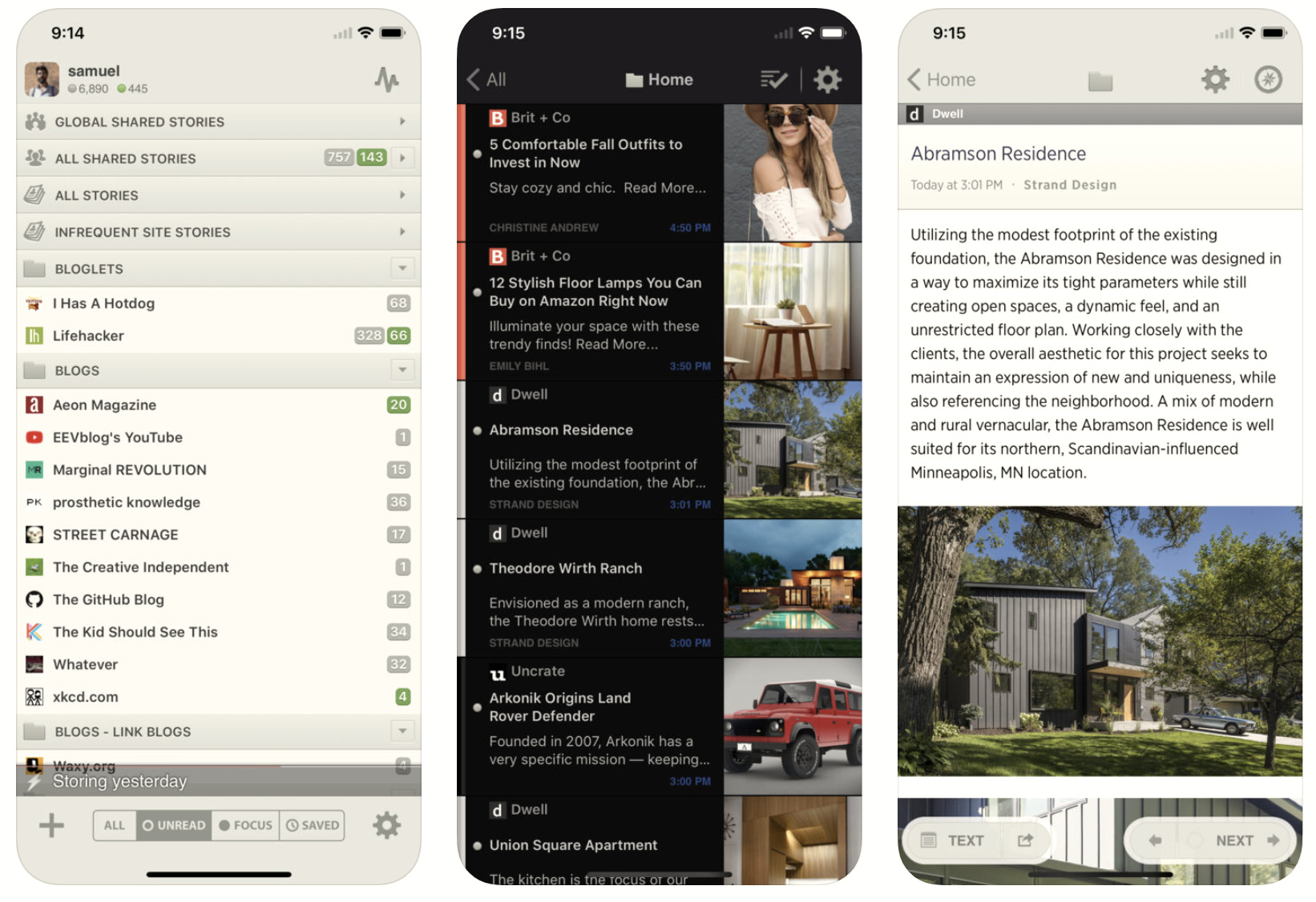 I don’t currently have an iPad but the service/app works well on iPads too:

I have tried tons of RSS readers and currently, Fiery Feeds is where I settled down. Reeder used to be my favorite, but the lack of updates has made it buggy working with new models. Unread is fantastic on smaller screens but on a display as large as iPad Pro, the font size and white margin seem to me uncomfortably blown up. Also, the Mercury parsing engine used by both of them cannot grab the full text of many sites correctly.

Fiery Feeds, in contract, is an unpolished powerhouse. It needs some efforts to set up and many of its default preferences are not optimum IMO. But once you figure out your favorite combination of layouts, palette, and typography, it will be enjoyable to use.

I corresponded with the guys who makes Unread and he said there’s a beta version of Unread 2 coming as well. But Reeder 4 sounds exciting

Another vote for Unread

Chris, why would there be a need for a special reader for the pro? Wouldn’t existing readers work?

HI, today, I’m using my brand new iPad Pro 2018 12.9 and using Reeder 3 in landscape mode, I have a bug where the display doesn’t show all the width of the iPad if I have an article selected. Does anybody else have that problem? It doesn’t do it in portrait mode.