After living in our “new” house for a year and a half, it was finally time to start finishing my basement office — where I work every day. It’s a small 8x10 space that’s adjacent to our home theatre. It houses my Mac setup as well as all my guitar gear (the guitars are a hobby of mine and not a profession, but we don’t have space for a separate room elsewhere).

We painted the home theatre a wonderful cool grey colour, but when we first moved in, I wasn’t sure if that would be too much for a basement, so I left two walls white just to live in it a while. I also didn’t have any shelves (the condo we rented previously had built-in shelves that belonged to the owner), so I always had a box or two on the floor I couldn’t unpack.

Here are some before photos: 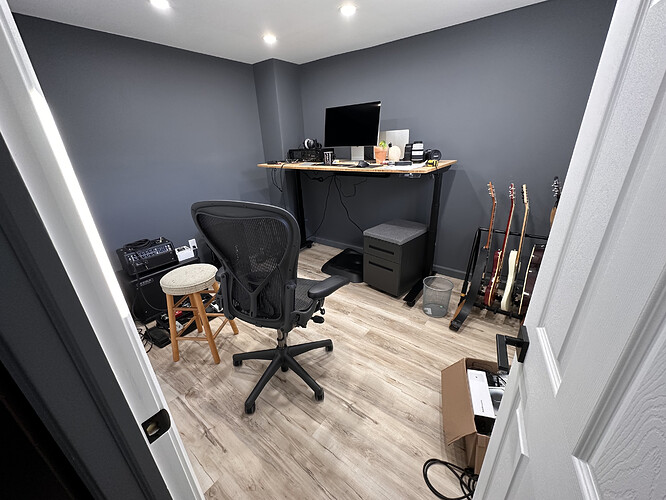 You can see the box on the floor in the photo above. 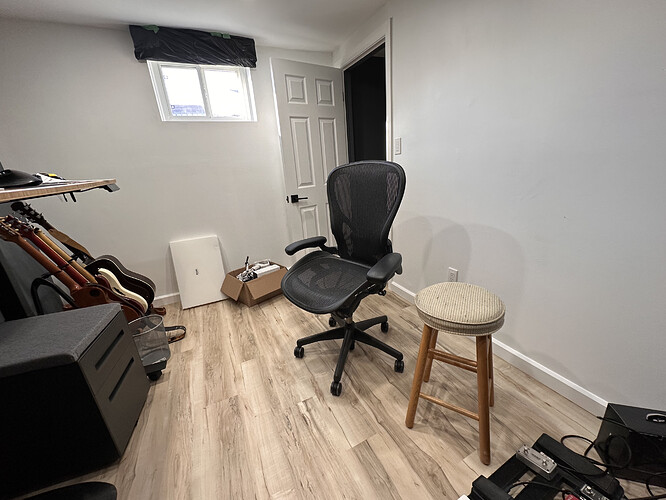 And here are the white walls.

As you can see, there’s a lot of empty space here, and it’s not super pleasant. It’s just a box. (We had the blinds covered up so we could paint around and under them.)

After a lot of hemming and hawing (including some hemming and hawing in this thread), I finally decided on a shelving unit for the office. I had some more guitar gear coming too, and it was time to start making this an actual livable space.

First, we painted everything grey and installed the shelves. It’s darker than it looks in the photos (the iPhone is over compensating by a lot), but it’s not too dark. It’s a really bright basement. (The electricians were angry about the number of lights I told them to install, but they eventually said the effect is very nice and they all got paid.) 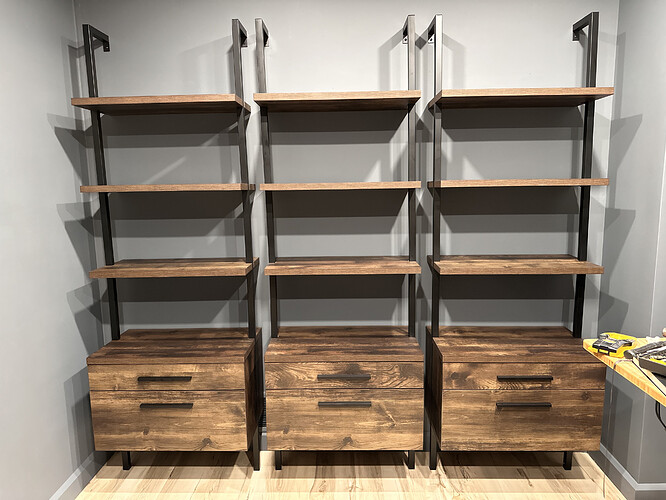 Please ignore the vacuum cleaner and the mess. 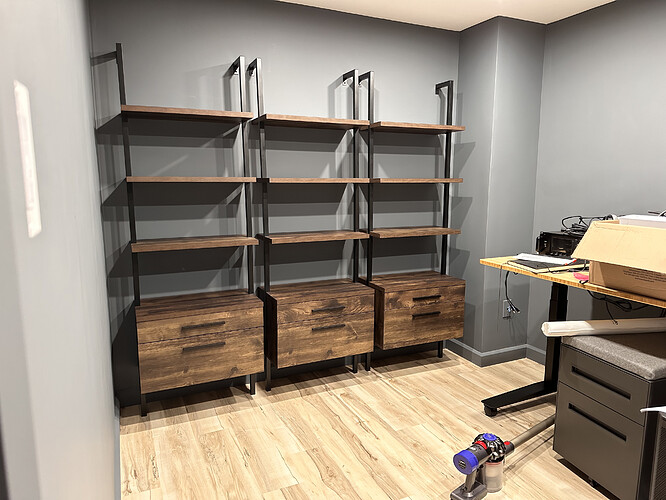 There’s still a lot to do. I’ve unpacked everything and set up the new gear. In the next month, I’m going to hang some of my guitars on the empty wall. Also, some of this new guitar gear is rack mountable, and since I’ll be bringing it back and forth to church a fair bit, I’m going to get a weather-resistant rack for it and store it all on the floor for a cleaner look. 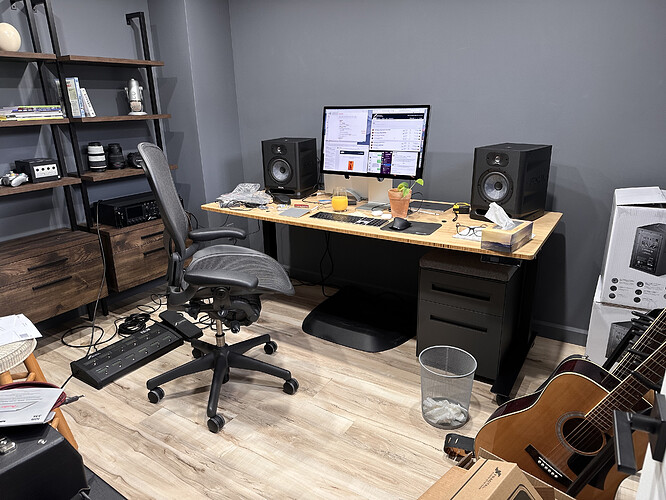 I’m getting over COVID, so don’t mind the orange juice and the tissues. I had to get some studio monitors as well (related to the guitar processor), so those are indeed new. 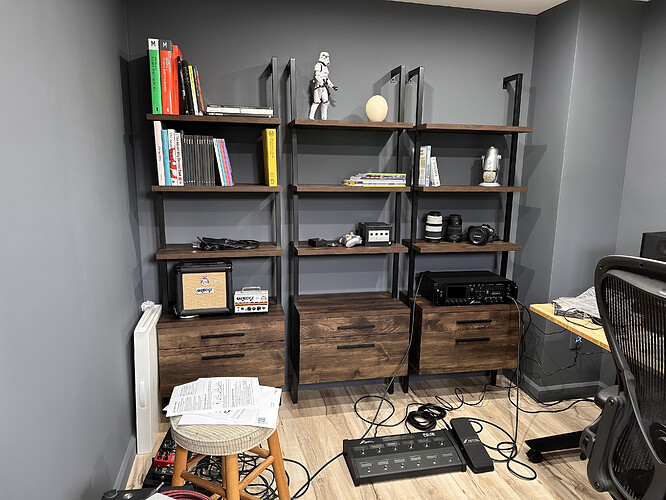 I also have yet to recycle the packaging for this new gear (did I mention I have COVID?) 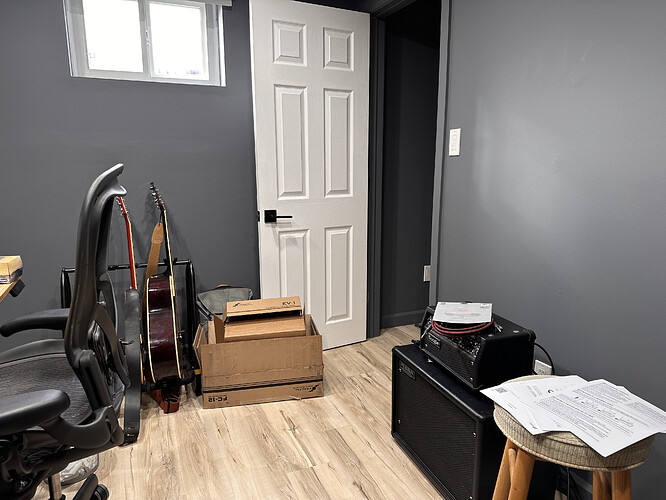 And in a couple weeks, hopefully 3 guitars will get mounted above the amp against the wall in this photo.

I’ll share another update when it’s done, but I’m excited about the progress so far and thought I’d share something here first.

If there’s any interest, I can do a full rig rundown in the next update.

Are you going to raise the Studio Display and/or the Focals with some kind of desk riser? Also is that the Fully Jarvis desk? I’m replacing my IKEA table desk soon and I’m thinking maybe it’s time to explore a standing option.

Hey Marius! I should probably raise the Focals, but they came with feet and I blew the budget on this one, so it’ll have to wait. (The feet already help a lot with isolating them.)

The Studio Display is the adjustable height one, so no need to put it on a stand (but I do have one from the iMac Pro days).

The desk is a Fully! Good eye. If you’re looking, consider spending $100 more on the Uplift. I have a friend with the Uplift and his desk is considerably more stable than mine.

Although, I’ll add, if you have any recommendations for a good speaker isolation stand that doesn’t break the bank, I’d be thrilled to hear them.

The desk is a Fully! Good eye. If you’re looking, consider spending $100 more on the Uplift. I have a friend with the Uplift and his desk is considerably more stable than mine.

Ah that’s a good tip! Yeah with current sales the prices are more or less interchangeable between those two so it’s good to know the Uplift is more stable. I liked their choice of table top woods more anyway so this works out well

Using his Uplift filled me with regret. It’s a nicer desk. More stable, prettier, better top, etc. I’m convinced the lack of stability for my desk is the thinness of the bamboo top. .5" is way too thin; it gives too much. One day, if I ever run out of house projects that require attention (probably never), I plan on replacing the .5" bamboo top with something real solid from Home Depot.

Thanks so much! It’s coming along. I’ll be very excited when it’s done.

Thank you Jim! And welcome to the MPU forum.

Fellow guitarist here. What axes are you sporting?

A 2017 Les Paul Tribute (gold top) that plays like a nice Standard (don’t know why), a heavily modded JEM clone, and a PRS SE Custom 24. I’d love to pick up a Silver Sky SE (or a Strat if I can ever find one I like), an Explorer (almost pulled the trigger a couple months ago but bought the Axe FX instead), and a nicer PRS (torn between the CE and an S2 McCarty. CE would probably replace the SE I have now, and the S2 would be a general purpose tone machine with all the pickup positions available).

What are you playing these days??

I’m a huge PRS fan and I also dream of owning a Silver Sky one day.

Oh! I want to hear all about your S2 McCarty, but I don’t want to detail the thread. Send me a message? Would love to hear your thoughts on how it sounds (with its pickup selection it seems like it would be aggressive compared to the Core model), if you got a single cut or double cut, the versatility of the single coil switches, etc.

I really like this…but get the liquids off the desk! Nothing good will come of it. Use something like this:

Everything else, except the monitor itself, is actually off the desk by at least a couple mm, so you needn’t worry! And I’m clumsy enough that I tripped over my chair and already dumped a whole cup of coffee on my keyboard, so been there, done that. But thanks for your concern!

Edit: Just a quick edit to add that I would also cause more damage bumping into that cupholder than I would just leaving the cup on my desk. The desk is wide enough that there’s plenty of space; it’s pretty low risk. And I have no pets or kids climbing on it.

OK, now you’re going to make me clean up my office which still has boxes and stuff lying around from moving into the house in February!

I was hoping you’d post some pics of the home theater too!

I’ll consider that next time I post an update about the office — it’s a pretty small theatre but it’s great for us.