I’m late to the game in trying out the Ulysses app for writing as many speak highly of this app. When I’m prompted to pay for a subscription, I’m getting an annual 12-month price of $24.99 rather than the stated $49.99 annual subscription price. I have no clue if this is temporary or a permanent change, but I thought I would make others aware in case the $50 price was a turnoff. Or perhaps existing users can change to the new price manually in the app store? Not sure, but I thought worth mentioning. 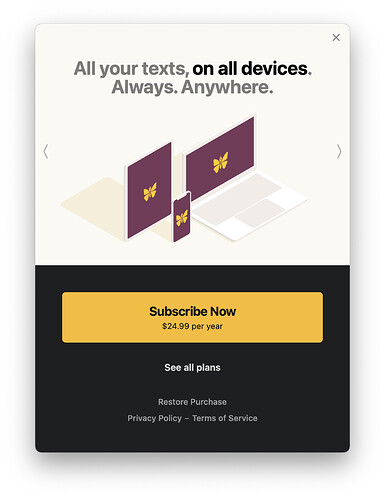 Maybe they’re lowering it — I would hope so. I’m on a discounted plan from before it was a subscription app (I think it’s $30 or $20/year but I don’t remember), but I won’t be renewing it. It’s not the cost that I mind, but the fact that other writing apps have in the meantime surpassed Ulysses in my own personal calculus. So do try them, it’s a neat app, but also know that there are a gazillion alternatives these days.

Personally, what made me draw the line and be done with Ulysses is that I’ve decided that I will not use any apps that store your data in their own databases or proprietary formats. I want my text files out in the open, where I decide that they must go. This simple rule has immediately eliminated some of the most prominent players (Ulysses, Bear, Craft…) and I’ve been all the better for it. I’ve since used a multitude of apps, each time picking the one best optimized for the job, and always maintaining interoperability. YMMV.

Out of curiosity (admittedly I am also in the market), which did you decide to go with?

I’d also be curious to know what app you’re using. I can think of several that allow you to host plain text files wherever you like (iA Writer, Byword, etc), but there are a lot of features in the Craft/Ulysses side of things that aren’t available elsewhere.

And to the credit of both Craft and Ulysses, it is (relatively) easy to get your stuff out of each app and moved elsewhere if need be.

Not to sound judgemental. I am just very curious. I would also love the perfect writing and note taking app.

Being a former Bear user, I can vouch that Bear has the best export options in the market. markdown, pdf, html, rtf, you name it. They store data in iCloud and use sqlite. It’s great for automations and writing too.

I just left since I wanted to reduce subs app. Use Notes now.

Are you in USA? and what price it show when you click on subscribe, I have seen at times on the payment page itself, it will show the more expensive subscription

I also hope it’s a reduction in price but having said that, I am not aware of any subscription app reducing its price.

Even 24,99$ is too much for this bugfest. Sorry, but I’m still angry… I’ve bought the standalone on both iOS and Mac just days before they introduced their subscription model. At that point the standalone was riddled by sudden crashes and bugs but I couldn’t find a better solution back then so I trusted them to get rid of the bugs.
Then they pulled the plug and told everyone to get the new version.
50 USD for a markdown editor? I don’t know what they have smoked. But this is ridiculous. And it’s still crashing from time to time right after opening it.

I mean, you could get Scrivener for that price tag. And keep it forever.

That seems to be the pricing for “Migration Offer”. I’m paying that price for my subscription. So far, they have no announcement of price changes on their twitter account.

Just mentioning that Ulysses doesn’t lock you in at all as you are able to use your own iCloud folder and work from that - either with their own file format (which is only to include sidenotes and images I beileibe) or plain md file. I’m doing that myself at the moment and have no issues with close to 6000 files.

So no need to use the Ulysses storage container.

I’m not seeing that as an option here in the UK. I have an educational discount right now so it’s not a problem, although I won’t qualify in 6 months so a $24.99 option would have been marginally less expensive overall!

Still, $1 a week for an app I use for one of my key workflows isn’t bad. The ability to export in multiple formats and multiple styles in each format is very helpful to me, as well as combining a number of separate documents into one export.

Just mentioning that Ulysses doesn’t lock you in at all as you are able to use your own iCloud folder and work from that - either with their own file format (which is only to include sidenotes and images I beileibe) or plain md file.

I tend to use the Ulysses document format as I extensively use per document word targets and the occasional local image which isn’t supported by md. Per folder word targets do still work even with Markdown. However, I can confirm md in an external folder works fine and can reside anywhere e.g., within Devonthink, Eaglefiler or Obsidian vaults or on cloud storage. I’m currently trying out external md files alongside Deckset to very quickly create presentations.

Craft allows you to use an outside file structure last time I used it. I was using an iCloud folder for a set of student notes I didn’t want to sync (so I only used it on my Mac)

Out of curiosity (admittedly I am also in the market), which did you decide to go with?

A variety of apps. On iPad: Taio, iA Writer, Obsidian, and the standalone Panda editor from Bear, which is awesome. On the Mac, those same four, plus Zettlr, and sometimes Nota.

there are a lot of features in the Craft/Ulysses side of things that aren’t available elsewhere.

And to the credit of both Craft and Ulysses, it is (relatively) easy to get your stuff out of each app and moved elsewhere if need be.

Yes each app offers unique features that destroy cross-compatibility. Same thing with Zotero and the in-house PDF-annotation system in v.6.0. It’s a personal choice, of course but I have come to see apps as tools and my files as the object, and I don’t want to work with objects that can only be manipulated with one proprietary tool. I’m prepared to suffer some inconvenience for that.

On the topic of export, exporting something is not the same as it being accessible from other apps in the first place! You know who believes that and says it clearly? Craft! In fact, in this document they say in Section 5:

Your data is accessible outside Craft.
This principle effectively means that you shouldn’t have to install Craft in order to interact with your data you’ve created in Craft. This is the area where we have the most to deliver - and we’re making progress.

(Note that this is aspirational — no movement on that front yet).

Craft allows you to use an outside file structure last time I used it. I was using an iCloud folder for a set of student notes I didn’t want to sync (so I only used it on my Mac)

Not true, at least not with the 2022 versions. They let you store the JSON files on iCloud Drive since they confess they don’t encrypt their servers (which let’s not even get started on that one…) but what you can store on your iCloud Drive is just a bunch of JSON files that are all but unreadable by apps other than Craft. See just above the link I posted.

So no need to use the Ulysses storage container.

This is true. But you don’t mention that, if you store in .md as opposed to their own proprietary modification of markdown, you also lose the touted “additional features”, or most of them. Some people may love Ulysses enough that it’s still worth it to them even when used in this way. I do love Ulysses (I even have their T-shirt and I used to teach wearing it!) but ultimately I feel that either you go all in or its value decreases. YMMV.

Bear has the best export options

See above. Export isn’t the same as not being locked in the first place. These decisions are obviously very personal; for me, when I hear “we have the option to export” I’m already turning around.

Fair enough, va! If it works for you, that’s great.

But you don’t mention that, if you store in .md as opposed to their own proprietary modification of markdown, you also lose the touted “additional features”, or most of them, that way.

You are correct, sorry for not being that clear in my first post. But it is possible to use external folders with the Ulysses file format and that way you hardly loose any features like goals etc (only one drawback when it comes to automation). Thats what I’m currently using together with an indexed database in DEVONthink (Ulysses files can be read but not edited).

I would look at Ulysses again in the $24.99 sub range but I would never pay $50/year for an iOS text centric app that does not have full TextExpander support. Its just lazy development for a text focused app not to have it.

Drafts, ByWord, and Textastic all have full TE support in iOS.

Sorry for asking but what do you mean by “full TextExpander” support? Im still able to use TextExpander in Ulysses on iOS (I’m using the old TextExpander version prior to subscription).

what do you mean by “full TextExpander” support?

Fill-In Snippets. It cannot be done with the “basic” text expansion or in the TE keyboard. The app has to support it.

Of course I asked Ulysses to add this since they were halfway there, and I got the standard, “thanks we will pass it along” response. It never showed up, I never renewed my sub.

I respect your personal decision but I would argue it is not really lazy development, not all of us use TextExpander. Maybe not even most of us, at this point, I remember seeing a thread on this a while ago where people were switching to alternatives.

I was so heavily ensconced in Ulysses by the time they opted for the idiotic subscription wagon that I really didn’t have a choice if I wanted to keep my well-established workflows without going nuts trying to find new ways of doing things. So, I stuck with them even though they promised they would never go subscription. If this is a price reduction, then I will still think it’s silly, but I’ll stop trash-talking them at least. Right now, the subscription does nothing at all for me–they haven’t added a whole lot I actually use; certainly not enough to merit the sub.