What is the oldest device you are currently using?

What is the oldest piece of hardware that you are currently using for productivity and what is the reason behind your decision for using said device?

My hardware is an iPad Mini second generation for taking very small notes (mainly for portability), I just find that the size is just right and it’s extremely flexible. I also bought a keyboard from Amazon so that this can be used as a mini notebook if required. Last point is that it is still supported!

My iPhone 5s. The reason being while I love getting new Macs, I somehow resent having to buy new phones so tend to put it off or use them until they break down. This one is at the breaking point now – just this week the battery died (replaced for $20 by Jose at my favorite grey market repair shop) – but at this point in the year I hate to buy one only to have the new ones come out in the Fall.

I also use an iPad mini which is old, but was only given to me by my university in October so it’s new to me.

We still use an iPod Classic when we travel. I also have the old iPod Nano that I use when I want to focus (helps me not to reach out for my phone). Planning to get my iPad 1 from a friend that I loaned to her years ago to use in our kitchen when I need to look at my recipes.

iPad Mini 2nd Gen for me, still being used as a family iPad.

Hi The oldest working Mac I’m using at the moment is my trusty PowerBook 1400c bought March 1997 and still running System 7.5.2, It’s connected to my Houston Cutter Plotter bought 1989 (29 years old and still working perfectly) that does a most brilliant job of cutting out vinyl every other day. I’ve had trouble connecting to it since ADB finished so now have to burn CDs to get the artwork onto it, hence all the disks everywhere. The plotter was connected to my first Mac a SE 2/20 but I upgraded when this excellent PowerBook came out and it still works, it’s sitting over my old SI and PowerMac 6100 that have both broken now. no need to change this setup because it’s still one of the best vinyl cutting setups you can get, not a drag knife but tangential so it turns the blade in the direction of the cut making it fantastic quality. https://youtu.be/FAdcFEzNNxM
Front of the CD tray has come off and since this picture and a visit from my young son there’s a key missing so I can’t delete now I can only cut. 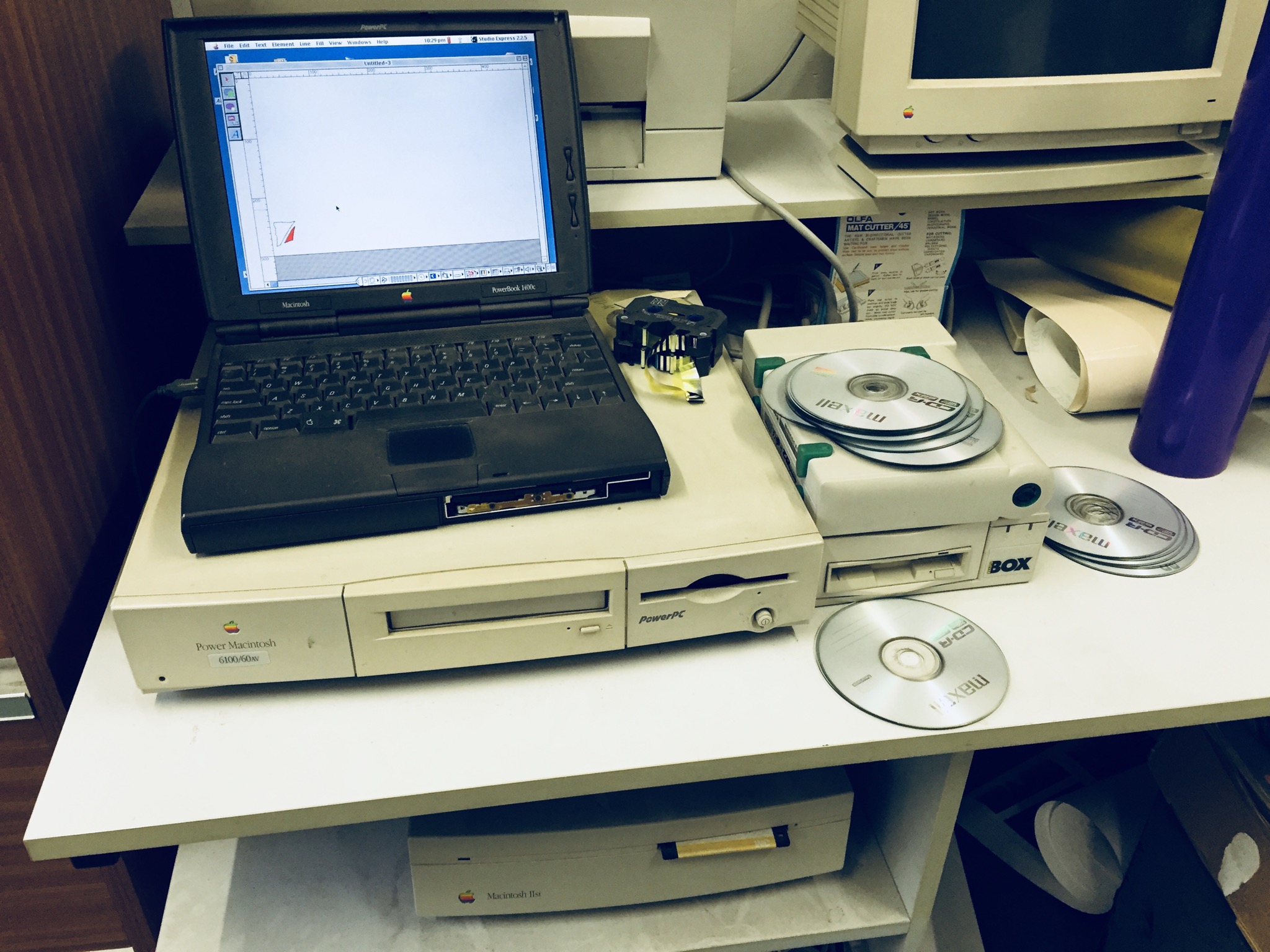 My oldest piece of Mac hardware is a 2009 MacBook Pro. I recently swapped out the HDD for an SSD and maxed out the RAM, which has proven to be an excellent choice.

My oldest device is a mid 2011 Mac mini (upgraded with an SSD). I took it in to work and use it as my desktop machine there, alongside my work issued PC.

My oldest Apple device still in use is a late 2008 13” MacBook - the very first “carved from a solid block of aluminum” laptop with a door on the bottom that opens with a lever for replacing the battery. I lost count of how many batteries I’ve put in it. I upgraded the drive to a SSD and maxed out the RAM to 8 Gigs a few years back. I continue to use it because it is a lovely little machine that still works fine.

I tend to keep my computers and just repurpose them for a range of specific tasks when new faster hardware comes into my life - sort of a personal, cascading hand-me-down effect. Earlier this year I finally pulled the plug on an old G5 cheese grater from early 2004 that had been relegated to simply running Safari for browsing a handfu of amateur radio specific web sites in my ham shack when I was on the air.

My wife still has her original G5 too (not in use either) and we keep threatening to get a glass top and use them as the base for a coffee table.

I use an iPod Touch 4th gen for gym tunes, and a 2007 Mac mini for ripping dvd’s. < comes in handy bc he new Macs lack the dvd drive.

My whole setup is old. I’m feeling some pain from how slow my iPhone 6 Plus is (and am looking forward to upgrading that this Fall). My iPad is an iPad Air 2 which is decently fast and has a more-than-acceptable battery – but the 16GB of storage keeps it from being a much more useful device. (Did not buy for myself)

The device I’m happiest with right now is my 13” 2015 MBP and it will be the oldest device I use in the future. It’s not just a beast, but it’s the best computer I’ve ever owned (first Mac too).

I use a 2009 MacPro. Thanks to a firmware update, MacOS thinks it’s a 2010 model which allows me to keep it current. I don’t yet know if I’ll be able to run 10.14 but I’m holding out for the promised MacPro next year… or later if I can keep this one running. I’m hoping the new model will accept my internal Blu-ray writer.

My only in use Mac is a 2012 MacMini which serves as my iTunes/Plex Server and for any InDesign projects I need to do. With 16GB of ram and an SSD it’s all I need for the work I do with it. Hoping to get another 5 years out of it.

For my regular daily use, my iPhone X is actually the oldest device. Unfortunately, that’s because everything else was stolen earlier this year, so I replaced it all with new toys (silver lining).

I still use my mid 2009 15 inch MacBook Pro from time to time. Upgraded with 512 SSD and 8 Gb, it’s not a hot rod but it runs fine. It can’t updated past El Capitan so I need to make a move off it to something newer or just stick with the iPad Pro for everything.

I currently use a 2013 HP laptop as my NAS as well as a 2013 MacBook air for everything else, I also have a 2007 iMac, which I used for light web browsing but that’s quite difficult these days!