515: Stephen Takes One for the Team

I haven’t listened to the episode yet, but I did notice the image filename. Very judgmental, @ismh.

I bet I can guess the title reference and subject of the confession, even without listening to the episode, but I won’t ruin it for anyone else who might not have my impeccable detective skills.

@ismh I do not see this need to feel embarrassed about buying state of the art tech. This is a hobby plus how could people take you seriously without being fully committed. Be proud and wave your Mac flag the way others would show off their latest outfit, sports car, golf clubs etc…

It’s more than just a hobby, it’s how he “pays for his shoes” as @MacSparky likes to say. He has several tech podcasts, a tech website, and a Mac-related YouTube channel.

This is very clearly and obviously a business expense.¹

¹ I am not a tax accountant and this is not tax advice.

My thanks to @MacSparky for playing along, and to @ismh for being appropriately horrified. I’ve saved the clip via Overcast sharing and then saved it to my hard drive, so I can have it forever.

I especially loved how David called it a “sweet solution” which most MPU folks may recall is that same phrasing that Steve Jobs used when talking about web apps instead of native apps on the original iPhone. I’m not 100% sure that David meant it the same way, but I’m about 98.75% sure.

I’ll admit that I did this as a joke because of all of the grief that Stephen gives David about his drive “taped to the back of his iMac” but I also have to admit that I haven’t taken it off since I did it. I had to use my laptop literally on my lap in a waiting room with no table, and it was really nice to be able to use my external SSD knowing that it wasn’t going to slip off my lap and fall to the floor while getting disconnected uncleanly.

Allow me to point out a couple especially terrible things about this picture: 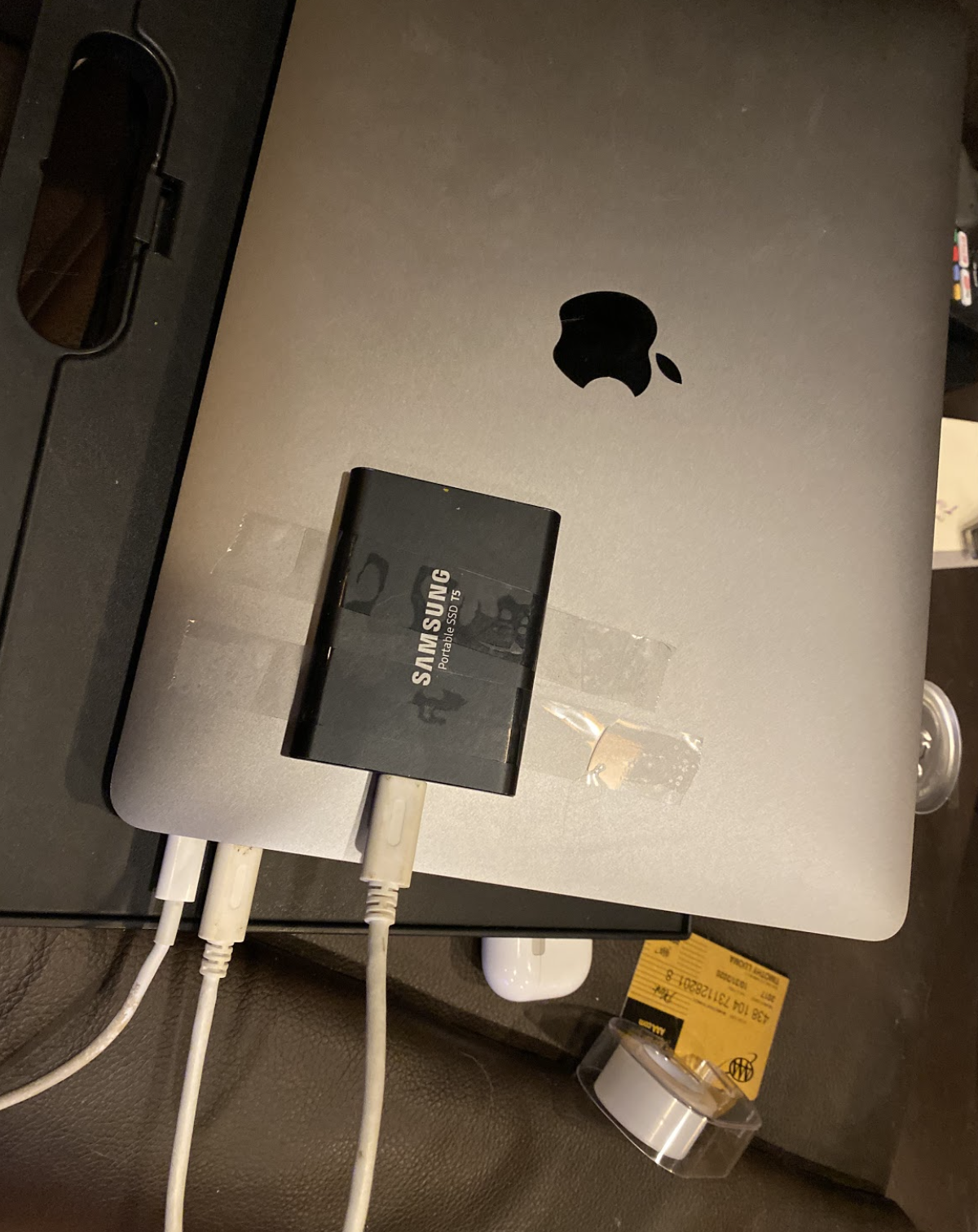 (Aside: I love that Stephen resized the image 512px.)

I think that I will eventually remove this, and if I put it back on, I’ll definitely fix issues 1-3. Ideally I would like to find a way that doesn’t include scotch tape, but it’s actually worked much better than I would have expected. And hey, who wouldn’t like a MacBook Air with 2.5 TB of storage?!

(I’m running virtual machines via VMWare via this T5 and it works great, btw, but the last thing I want is that drive disconnecting and potentially corrupt my VM image.)

@ismh - having heard you reference the distraction factor of the Touch Bar reminded me that I had just heard someone talk about that recently. Turns out it was Rob Griffiths:

Shocking even myself, I’m now the owner of a Touch Bar equipped MacBook Pro—I purchased the entry-level 16″ model last weekend. Why? I’ll save the detailed explanation for an upco…

…just because I now have a Touch Bar-equipped Mac doesn’t mean I suddenly like the Touch Bar. In fact, my feelings about it haven’t changed since I wrote about it two years ago:

Rob’s solution was to change the settings shown here: as he explained (emphasis mine):

For me, the simple fix was to set the first pop-up to “F1, F2, etc. Keys,” and the second to “Show Control Strip.” Now, when using my machine, the Touch Bar never changes—and I have my function keys back (though I do have to look at them to use them):

This is the first time that I had heard this is possible, and I expect it is what I would do too.

Maybe that will help you too.

ps - if @ismh built a computer capable of running macOS out of generic PC parts, would that make it a Hackettosh?

I’ll see myself out.

Very interested in how @ismh fares on his search for a research app. His use case is similar to mine.

I have found I don’t need to archive old notes and materials much. Everything I create goes to the Web. Google is my DevonThink. But I like to keep those materials around anyway. I was involved in a lawsuit very early in my career and it made me obsessive about hanging on to work materials.

Last night it occurred to me that I like using Bear so I’m going to just use that even though in some ways it is less than ideal for my needs. If and when I decide I don’t like Bear, I’ll do something else.

I thought the discussion about the LG 5K screen was pretty good and my experience as well. The bezel and the like are ugly, but the panel itself it good, and I like that the pixel density and color matches well the MacBook Pro display I keep just to the right of my LG screen.

And no problems over here with the trackbar changing. It’s the very least of distractions in this office.

May I suggest 3M’s VHB tape?
It holds the stainless skin on the Walt Disney Concert Hall, so will hold your drive nicely.

Not sure if @MacSparky needs a GPU upgrade, or was speaking hypothetically, but the Blackmagic external GPU is available if the need arises.

The USB 3.1 specs (etc.) are actually gigabits per second, as the b is lower case. Convention is to divide this by 10 to get gigabytes per second, which accounts for creating packets, checksums, etc.

I have a Sabrent Rocket 2T drive that works well. It’s an external NVME drive connected to Thunderbolt 3, and is rated at 2.4 GB/s (gigabytes/s) read, 1.2 GB/s write. I just benchmarked using Diskmark and compared to a couple of USB 3.0 drives and the internal iMac Pro SSD.

I appreciated the Headspace talk by @ismh . I’ve been building up my meditation habit and really like it. There’s actually considerable research behind meditation in general, and Headspace specifically.

For those of you in the corporate world, Headspace offers programs for companies and non-profits. We are about to implement it in our ~80 person organization and can’t wait to see if we get some good results!

Where do one screw a SSD in the Mac Pro, or do you need one of those Promise card to put the SSD inside it? I don’t see any drive bay typical of PC case.

Also, I know that it’s best to upgrade to 4TB when buying the Mac Pro because the SSD is secure by the T2 chip. If that is the case, how will a 3rd party SSD from say, Samsung, works? Or is that why the Promise card is needed?

Where do one screw a SSD in the Mac Pro, or do you need one of those Promise card to put the SSD inside it? I don’t see any drive bay typical of PC case.

I picked up the Pegasus enclosure: https://www.apple.com/shop/product/HMUF2ZM/A/promise-pegasus-j2i-8tb-internal-storage-enclosure-for-mac-pro

They also make a much larger one for a lot more storage with RAID support but that’s overkill for me.

I have always used DEVONthink. It is a bit of a power user app. It may be overkill for you. Since I have retired I am expirementing with keeping my main files in Documents (Readle), and you can link it to a folder on the desktop via iCloud, I may just use this going forward.

I am envious of you getting a Mac Pro. The podcast network must be doing very well

Regarding Selfies, it is much easier taking pics using the volume buttons than tapping on the screen.
Obviously the case provides instant access to the camera, but the easy capture is built in.

Regarding research apps, another option worth considering is Keep It.

This is along similar lines to DEVONThink, but a bit less intimidating and with a more modern feel.

I’m going to check it out after the New Year. I tried it early on and didn’t love it but am going to test drive it once more.

Just a word of warning: there have been several reports of iCloud sync issues with Keep It.

I experienced this myself. It has a window that will let you see what’s happening, which is good, but I often found things just stalled for no reason, and (as often is the case with iCloud) there’s no easy way to kickstart or restart the sync.

I’m not sure I actually lost anything with Keep It, but it was concerning enough that I stopped using it, which was too bad, because it really does seem like a nicer, more modern app than either Evernote or DevonThink.

Same experience here. Unreliable sync in Keep It put me off it.