Anything to look for in a "CarPlay" car?

I’m actively looking to buy a new car, and like many of you, CarPlay is a must have.

I read all the great comments in this thread:
https://talk.macpowerusers.com/t/how-nice-is-carplay/4040

Because (it seems) like each implementation of carplay is somewhat dependant on the controls/interface of the particular car you are buying, any advice on what to look for? (EX: touchscreen vs jog wheel, steering wheel controls, etc.)?

My car does not specificly use CarPlay, but I really don’t like the touchpad as an input device while driving. Too sensitive and requiring me constantly to check the display when selecting instead of keeping eyes on the road. Often a click is misiterpreted as a move to the next option. Imagine having the Apple TV remote in your car

Steering wheel controls and a jog wheel is much more precise imo, esp. if the wheel has a tick-tick mechanism, giving you tactile feedback for each selection position.

Be aware that depending on the car manufacturer or aftermarket provider there are good touch screens and there are lousy ones, and you might need to do some research if it’s the latter. Basic overview at 9to5Mac: 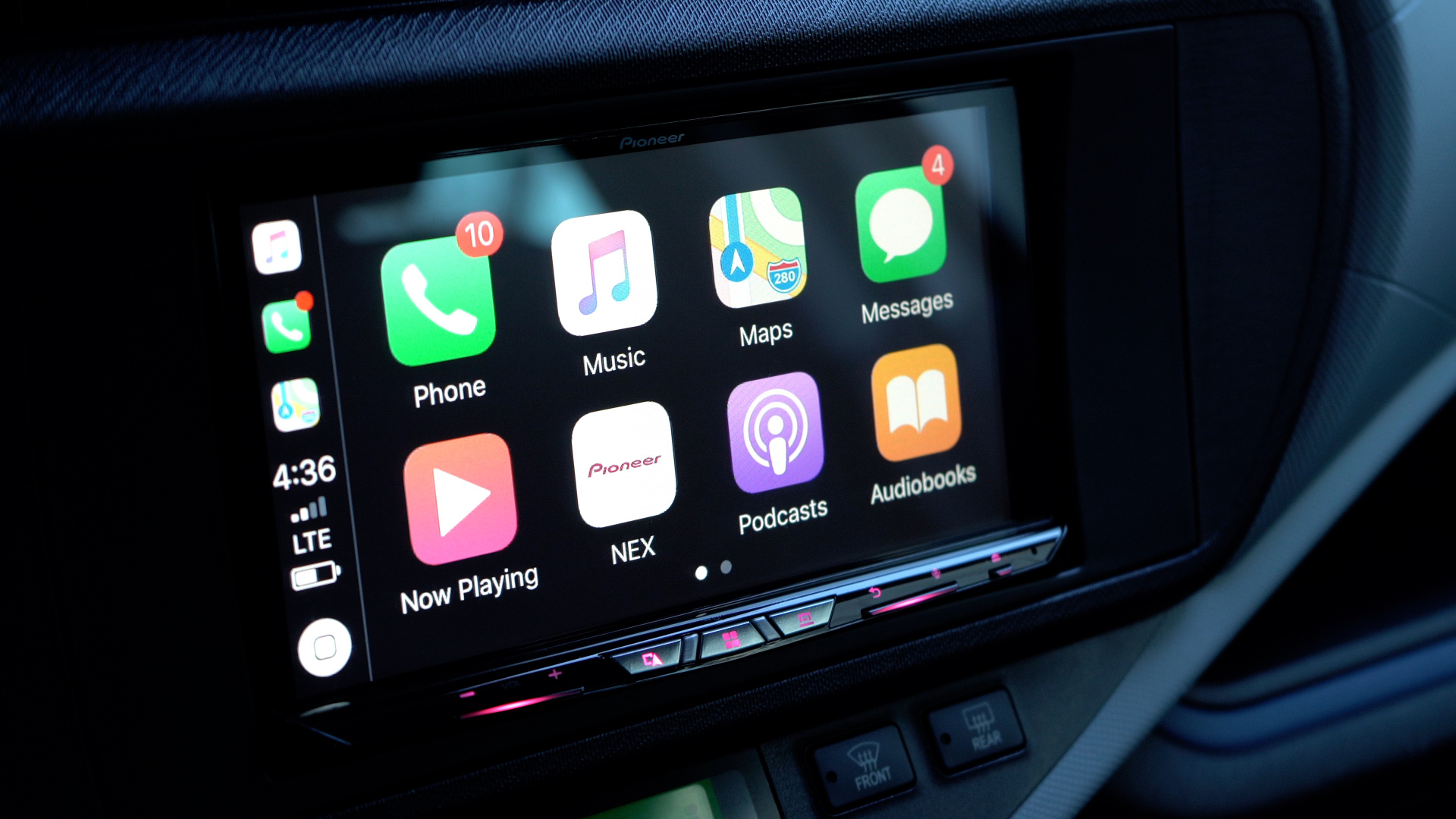 But what if your car doesn't have a built-in display or the one it has doesn't work with Apple CarPlay? The good news is you don't necessarily have to go out and buy a brand new car. In most cases, you can buy and have a really good in-dash system...

I recently rented a Renault with CarPlay and it was great, in my first and only experience. Really nice to have Google maps front and center in the console.

I have a 2018 Acura TLX which is the first year they offered CarPlay. For those familiar with Acuras, they use a somewhat goofy two screen design. The lower screen is touch, but only controls the HVAC and “infotainment” system. The upper screen in not a touch screen and displays other information such as trip computer, Bluetooth audio, etc. it is on this upper screen that Acura chooses to put CarPlay.

So I have no touch control for CarPlay. It is a matter of rotating a knob and pressing it to select. With what I hear of some people having double with finicky touchscreens, I really don’t mind this input method. I don’t need to concentrate on the screen nearly as much as if I had to tap a button.

That said, my car only allows CarPlay through the USB connection. A friend with a BMW says she can use CarPlay over Bluetooth. It would be convenient to not have to plug in the phone every time.

I am seriously considering the Mazda6 at the top trim level. Similarly, it is wheel controlled. The touchscreen capabilities disable above 7mph as a safety feature. Stupid safety!

Also, the phone is meant to be kept plugged in under the center armrest, where one could not look at their email (if one wanted to do that).

I recently rented a Mitsubishi small SUV, which had CarPlay. It too was my first experience with CarPlay. Fortunately, I had updated my iPhone 6to ios12 a few days before.

The responsiveness of the touch screen (or my iPhone) was terrible.
The UI was confusing. I was very disappointed with CarPlay.

I hope all CarPlay systems are not this bad.

That’s why you need to consider the touch screens being used. It can make a huge difference because there are two different technologies that can be employed - capacitive and resistive - as the article I linked to above explained.

I have a 2018 Mazda6 with the Signature trim. I love the CarPlay feature in it. The touchscreen is very responsive and I use the jog wheel quite a bit. For me, I find the jog wheel easier to use while driving. I have to lean forward to touch the screen so I consider that a hazard when driving.

When I had iOS 11 on my iPhone 6s, everything worked flawlessly. Since I updated to iOS 12, the Podcast app acts wonky from time to time. I’m not sure if I’m not doing something properly or the app needs some love. I plan on checking out the audio player in the latest Waze update. That might solve my issue.

I have a 2017 Honda Civic Touring which has CarPlay support that you can only navigate with the touchscreen. The touchscreen is okay, good even (not fantastic), but nothing to complain about.

There is one “killer feature” of the new Civic’s that unfortunately interferes with CarPlay: the “right turn signal camera”, which is like a “backup camera” for the right side of the car that turns on when you use your right turn signal. It’s extremely useful and many people who ride in the car with me comment about how cool it is, but, if you’re in the middle of speaking or listening to Siri and throw the right turn signal on, it cancels out whatever Siri was doing.

CarPlay has a lot of “quality of life” issues, but it’s way better than any native car screen UI…

I have a 2017 Ford Escape and CarPlay is indispensible. Ford has done a pretty decent job with the integration. I have almost 2 1/2 years of experience with CarPlay since taking delivery of the Escape.

Now that Apple has allowed 3rd party nav apps to work via CarPlay, you can choose from alternatives to Apple Maps for navigation.

Used to work in service at a GM Cadillac - GMC dealership. GM’s CarPlay is very good. I showed many people with Cadillacs the difference between it and the CUE system (GMs OE Cadillac interface - don’t get me started! Car manufacturers need to give up on these interfaces!) - you would think that I enhanced the value of their car by thousands!

I agree that CarPlay is better than any built in system and I am starting to wonder if it’s even worth purchasing the NAV system my the next car since CarPlay is standard. But here’s a key difference: CarPlay requires data to route, display maps, and interpret Siri commands. The built in nav does not. I occasionally find myself using the built in system when cell data is limited or nonexistent.

In Google Maps, which you can now use through CarPlay, you can download custom areas of the map to be used offline, avoiding data usage in the future. However, this can take up quite a bit of space depending on how much area you want to download.

A downloaded map that include the entire state of Connecticut is around 1.7GB, to give you some kind of rough idea… (The app shows you how many MB’s the custom offline map will be before you download it)

I’ve now had CarPlay in my 2019 CX-5 for about three months. I couldn’t imagine going back. I thought I would be annoyed by not having a touch screen while I drive, but in hindsight, I would never use it. I like the wheel control for podcasts, messages, maps etc.

I too hate that anything I’m doing with Siri will be cancelled and forgotten with an incoming message, but I’m getting used to it!

My favourite of the cars I have tried is the Subaru with 8” display - well priced car, beautiful big responsive display located within reach
I strongly disagree with comments made about jog wheels being a better interface, CarPlay UI is designed to minimise clicks (you usually get what you want from one touch or two)
Using an alternative method will require checking for visual feedback and is more finicky and therefore less safe

I strongly disagree with comments made about jog wheels being a better interface, CarPlay UI is designed to minimise clicks (you usually get what you want from one touch or two)
Using an alternative method will require checking for visual feedback and is more finicky and therefore less safe

I would have thought that I would have 100% agreed with you, but now having the jog wheel interface, I’m on the other side. When my car is stopped (at a red light) I have the touchscreen interface enabled as well, and I never use it. Even though you would think one interface would be less distracting, I find using the jog wheel and only glancing at the screen for visual confirmation pulls a lot less attention than looking at the touch screen and actually touching buttons. But that’s just me!!!

There is one “killer feature” of the new Civic’s that unfortunately interferes with CarPlay: the “right turn signal camera”,

I don’t know if you know this, but just in case you don’t: You can disable the automatic activation of the Lane Watch camera. If you need it you can manually activate it with a button in the end of the left control stalk.

I have a 2017 Honda Civic with CarPlay and it’s touchscreen only. If I could change one thing about the car it would be to have a wheel and button interface instead: touch is terrible for scrolling through lists of things like playlists or album track lists.

I love CarPlay and hate the touchscreen.

Yeah I tried that at first, but kept forgetting to hit the button / got annoyed at doing that… Lesser of two evils. What trim level do you have in the Civic? This is a little off topic, but isn’t it a fantastic car for the money? The CarPlay was a big factor in me purchasing it, they were one of the first models to have that in there.

Certain things about CarPlay are really lacking, but I believe a major factor in its design is keeping it minimally interactive to minimize the amount of time people spend messing with it while they’re driving…