In the market: 2 drive DAS RAID

I’m in the market to buy a fast 2-drive DAS (Direct Attached Storage) RAID enclosure for my MacStudio. Looking for something with Thunderbolt 3/USB 3.1, that I can populate with my own drives, and run in RAID 1 for redundancy. I’m curious what your recommendations are?

I have not purchased anything from them recently, but I always had good luck with hardware from Macsales.

OWC is your source for everything Thunderbolt from external hard drives, enclosures, docks, adapters, cables & more. All backed by OWC limited warranty.

Since you’re looking for two drives, you could use two external thunderbolt drives with macOS’s built in RAID.
I’ve been using two Sabrent Rocket Extreme 2TiB SSD drives in RAID0 (stripe) for a couple of years. They are really fast becnhmarks.

I absolutely would not buy a drive with an attached cable. The first Sabrent I bought had an attached cable, which failed, replaced under warranty with the newer model. Happy customer (me) bought a second one, and the RAIDing began.

The ones I bought are no longer for sale, but the 1TiB drives are.
They also have cheaper USB 3.2 drives, but no where near the speed, as far as I can tell.

I’ve been a Mac user since 1984, but have never bought anything from OWC/MacSales. I did just buy a Gemini drive, that I populated with 2 - 18TB Seagate EXOS 7200 RPM drives, and I’m getting 285MB/s write speeds, and 145MB/s read speeds. These are so different and weird, and OWC can’t help me with figuring out why. They told me that the speeds are within range, and that’s the best they can do. Looking at System Report, I’m showing connection speeds of up to 40 Gb/s via the Thunderbolt 3 ports with the cables that I’m using. 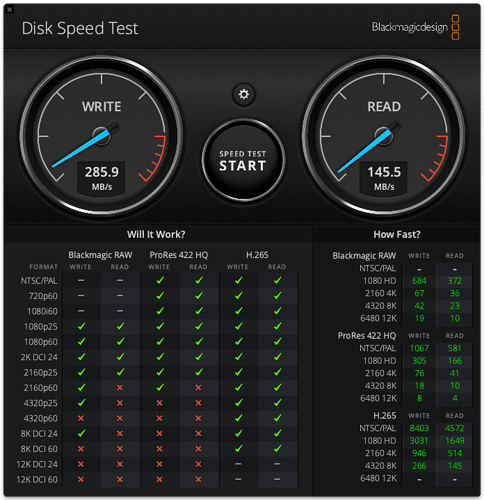 the speeds are within range,

It’s not unusual to get an answer like that. Question. Why is my car only getting “C” miles per gallon? Answer. “The average for that model is “A” to F”.

I’ve paid ridiculously expensive consults to help me with technical problems and received similar answers. Sometimes I would start over with a different product and/or company. Sometimes we’d decide to live with the results we had. We always wanted great, sometimes we settled for good enough.

Macsales was one of my regular vendors until I retired in 2018. I purchased a number of items from them such as replacement/upgrade SSDs for MacBooks, rackmount and standalone drive enclosures, etc. and don’t recall ever having a problem. That’s all I can tell you.

I’m not suggesting that there’s an issue with MacSales/OWC. However, there could be an issue with this particular piece of hardware. Their suggestion to me was to try to reproduce the issue with other drives, and other cables, and I have. The issue remains. I’ve never seen an instance in which the write speed is faster than the read speed on any device. I’ve just confirmed that by testing with my other DAS (direct attached storage), NAS and various external non RAIDed hard drives.

I’d love it if OWC simply said, “There may be an issue with your device. We’ll send you a new device, so please box what you have, and return it to us.” Outstanding customer service goes a very long way in terms of making people/customers happy.

I think you need more data and from an additional source if possible. Read the following article about the dangers of grabbing data points and comparing them without a full understanding of the situation. The author’s observations support the idea that under some circumstances write might indeed be faster than read. The two numbers you have shown us are not anywhere near the full picture.

What’s our purpose? What factors confound the results of tests, and how to eliminate them? Which tests? What should we believe, and where do we go from here?

Per OWC’s suggestions, I’ve swapped the drives in the bay and reformatted them, and still got the same speeds. I grabbed two Western Digital RED 5400 RPM 4TB drives, and put them in the enclosure, and got a similar discrepancy. I swapped out the Thunderbolt cable, and got the same results. Used a different Thunderbolt port on the Mac Studio; same results. Ran the Blackmagic Disk Speed test on my NAS, on another (older) RAID, and on a few different external devices, all of which produced faster read speeds than write. Also ran AJA’s System Test, and got similar results. In talking to OWC, they didn’t have any specs on RAID 1, only RAID 0. However, he claimed that the discrepancies that I’m seeing are within spec.

I’ve never seen an instance in which the write speed is faster than the read speed on any device.

There are a couple of examples in my benchmarks linked above, internal SSD, and my raid SSDs.

I wonder how owc achieved their “upto 773MB/s”. Is it theoretical, or something they actually tested?

OWC’s SoftRAID and driver developer blogged some misconceptions about APFS, how virtual machines, email, and drive snapshots work, but never responded to my concerns and questions, which hurt their credibility with me.

How are the drives configured? It could be that it is able to write data to both drives (i.e. File A to drive 1 and File B to drive 2) so your throughput is effectively 2x the write speed of a drive. But when you read a file it is all on one drive you you don’t get the 2x power?

That’s not a good look for OWC, if you can’t get them to respond to a simple technical question. When speaking to their tech support gurus a few days ago, I got very different answers to the same question, when I asked 2 different people. That’s also not a good look. I’m bothered by their dismissiveness when I asked them about why I was getting the varied speeds.

The drives are configured in a simple RAID 1, which means that files are being read from and written to both drives for redundancy. Drives often cache data for read-ahead, which can give much improved performance. They also do the same with writes by buffering.

For sure, hence my question. My home NAS is 3 pairs of drives (each pair is a mirror configuration)

The reviews on B&H would be a good resource since you do video work, should you decide to return it.

Looks like the Gemini is hit and miss:
https://www.bhphotovideo.com/c/product/1513121-REG/owc_other_world_computing_owctb3dkp2d_owc_mercury_elite_pro.html

I expect a used Mac Mini from OWC (macsales.com) to be delivered to my home tomorrow. So far all touch points with OWC have been excellent.

Many, many, years ago I was the hardware and software support guy for a small but rapidly growing company. I ordered a lot of equipment from OWC and remember them as a good partner.

When speaking to their tech support gurus a few days ago, I got very different answers to the same question, when I asked 2 different people.

I think you are expecting too much from an outfit that sells other manufacturers’ parts. Sounds like they are trying to help you, but you are the one who is actually assembling and integrating your system. And if you have any experience at all with customer support, you know that the level of expertise varies widely.

Here is a quote from another article in an attempt to get you to think a little more broadly about the problem you have identified.

There is no simple formula for determining how different cache options will impact the overall performance. Suffice it to say that it can be very dramatic, depending heavily on the cache choices and workload … many factors influence the final performance. One is the implementation of the system itself. A poor implementation might cause latency. Or it may fail to use the available spindles (such as having a RAID 1 array read only from a single disk instead of from both simultaneously) There is no easy way to account for deficiencies in specific implementations.

I think you are expecting too much from an outfit that sells other manufacturers’ parts.

Yes, lower your expectations @TallTrees , and you’ll be much happier.

I think they are a little more than a reseller of parts, as they produce SoftRAID (which isn’t yet compatible with Ventura, and may require a paid upgrade). They also put those parts in boxes, connect them together, and put their label on them, making them their own. Should @TallTrees have to go to Intel and find out why their JHL6540 Thunderbolt controller isn’t doing the job?

Oh, come on, @JohnAtl, you know what I’m talking about. We’re talking about commodity disk drives and enclosures, sold separately.

I recommend realistic expectations if your goal is some degree of happiness.

My main point is that @TallTrees tells a story that makes him out to be a sympathetic victim of sorts when the true situation is much more complicated than that.

Also noting that if what I’m seeing is correct, his “write” is near the claimed maximum sustained transfer speed of the drive.

Even if he got the two numbers more matchy-matchy, I would suspect that speeds much beyond the current “write” speed for “read” would require striping.