iPad on a Stick

In an earlier article I related my experience spending a month using my iPad Pro with an external monitor. The external display has some real ergonomic benefits, putting the screen up at eye level rather than down on the desk. However, it does create an odd and unnatural divide between the display, where I can look while I read or type, and the iPad itself, where I need to look to swipe or tap.

The next stage of my iPad experimentation has been to get a tall stand for my iPad, raising it up to about eye level. In this case I’m using the iPad Stand for Desk, Aluminum Height Adjustable Swivel Stand and Holder for iPad Mini Pro Air Tablet Up to 12.9" iPhone Galaxy Phone iPad Bussiness Office Kitchen Display Charging Dock Accessories. (Yes, that entire thing is the name. And yes, they misspelled “Bussiness.”) This stand was recommended by Myke Hurley on Upgrade. While this is a very tall iPad stand, I’m still using a ream of paper underneath it to raise it a little higher. I’m also still using the Apple Magic Keyboard with the numeric keypad. 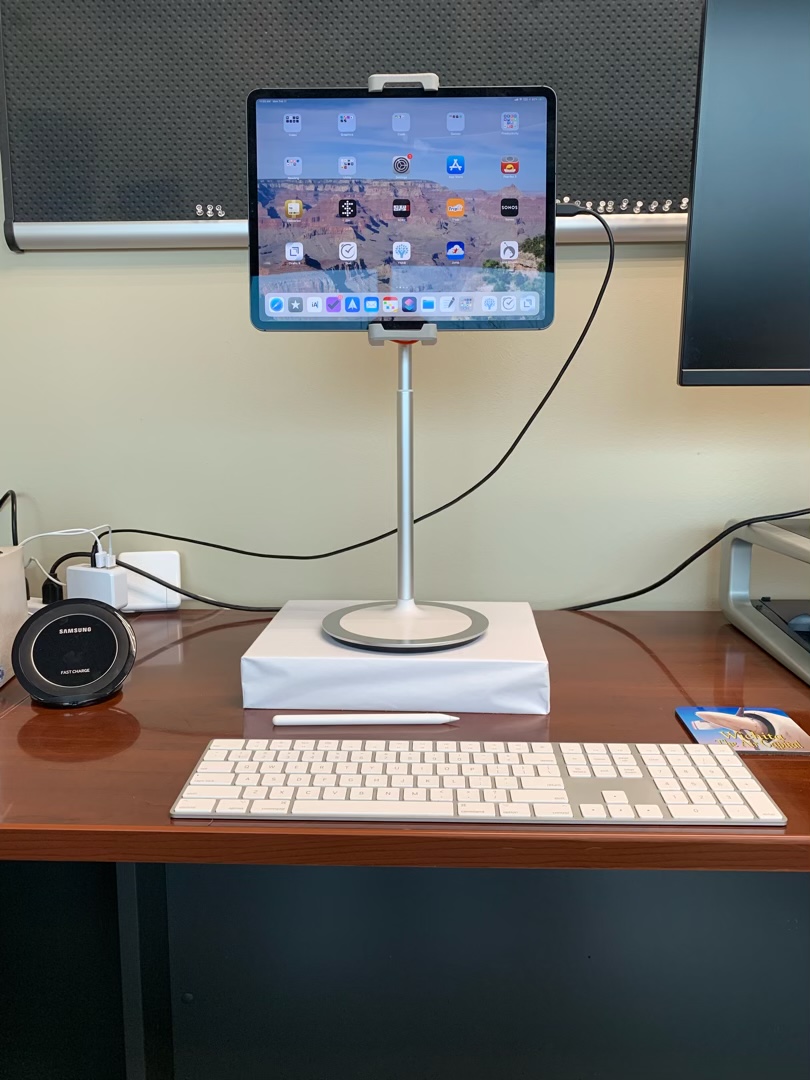 My initial reaction was that after spending a month with my iPad’s screen on a 27" monitor, even the 12.9" iPad seems tiny by comparison. It’s by no means too small to use, but there’s definitely a different feel to it than using a big external display with the iPad (or my 27" iMac, for that matter).

Of course, the biggest change to interacting with the iPad on a tall stand is the need to reach up to interact with the screen. With the iPad in a Smart Keyboard Folio or the Elevation Labs DraftTable that I used with the external monitor reaching the screen is a matter of moving my hands a few inches. With the tall stand, it’s more like moving my hands a few feet. This is definitely “zombie arms” territory.

In contrast to using the iPad with an external display, there’s no confusion about where to look. As a display device, when reading or typing, the iPad works just fine. Once I got over my surprise at the size difference the screen was plenty large enough to read easily.

An advantage of having it on a stand like this is the ability to rotate it into portrait mode. The “sheet of paper”-like experience of working on a text document in portrait mode is quite nice. It might be one of the best ways to do extended writing in a single document on the iPad (maybe that weird iPad Keyboard Dock for the original iPad was on to something).

The flip side of the ability to rotate into portrait is that it can be a bit of a challenge to get the iPad exactly level and centered in the stand. Maybe it’s just my OCD’ish tendencies, but I find this bothers me quite a bit. It’s also more trouble to get in and out of the stand. With the Elevation Labs DraftTable, I could just flip the Smart Keyboard around the back, set it on the stand and plug in the external monitor. With this stand, I have to take the iPad out of the Smart Keyboard Folio and go through a somewhat fiddly process to get it into the spring-loaded rubber clamp that keeps the iPad in place.

One minor annoyance is that in the stand I’m not able to put the Apple Pencil in its usual spot atop the iPad Pro. Always having the pencil available and ready to go is one of the best features of the iPad Pro. If I were to go with this sort of setup long-term, I’d definitely want some kind of pencil holder on my desk so that there would be a spot for it. For now, I’m just putting it on the desk between the keyboard and the base of the stand.

When I first started my experiment using my iPad Pro with an external display, the question I was trying to answer was “can an iPad Pro replace a Mac on my desktop at work?” Given that I’ve gone two months without needing to do anything substantiative on my Mac, the answer seems to be yes (keeping in mind that I do have a PC sitting right next to the iPad that can shoulder some of the load, even if I prefer using iOS and macOS rather than Windows).

Unlike a lot of people, my main challenge in using the iPad as my primary work computer was always ergonomic rather than about the software. Things I use my Mac for at work (editing text in iA Writer, managing tasks in OmniFocus, browsing the web in Safari, and reading and replying to email in Spark or Apple Mail) can all be done on the iPad. Any other tasks can be done on my work-issued PC. The challenge has always been that, for me, working for an extended period using an iPad in a Smart Keyboard (or a traditional laptop for that matter) was never that comfortable for me. I want better ergonomics, with a display up at eye level. Both using an iPad with an external display and putting it in a tall stand solve this ergonomic issue.

At another level, however, neither if these iPad setups really feels optimal. Using the iPad with an external display creates an awkward blend of direct and indirect manipulation. Using it on a tall stand requires my hands to come a long way up from the keyboard to manipulate the screen. If I had to pick one, it would probably be the external display, but it’s still a compromise. These disadvantages are significant enough that now that the experiment is over, I’m planning on going back to my MacBook Pro hooked up to a nice, ergonomically placed external monitor as my daily driver at work.

If my MacBook Pro were to die, though, that would put me in a difficult spot. Are the disadvantages of using the iPad in this role significant enough to justify dropping over a thousand dollars on a new Mac? That’s kind of a hard sell either way. The Mac definitely provides a more natural, compromise-free desktop experience, but a new laptop or Mac mini would be a pretty substantial outlay compared to an external display that I could use with the iPad Pro I already own.

At this point, I hope that my MacBook Pro will hold out long enough for Apple to make improvements that would make the iPad Pro a better fit for this kind of role. This could be support for external pointing devices, but it could also be better support for keyboard shortcuts (by both apps and the OS) so that I could get more done without tapping and swiping on the screen.

5 Likes
iPad as Laptop Replacement
Where do you use your iPad?
Mac Power Users 473: Shawn Blanc’s Evolved Workflows
iPad Pro with an external display